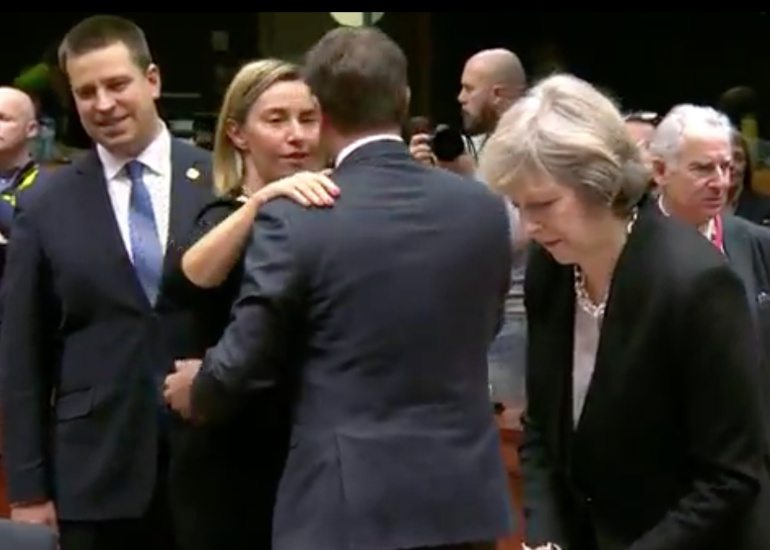 Cringeworthy video footage has emerged of Theresa May being shunned by her colleagues at the EU.

Posted on Twitter, the first video shows May standing awkwardly while her fellow Europeans warmly greet each other. She plays with her cuffs and looks around seemingly not knowing what to do with herself:

Oh CRINGE Theresa May has got no mates pic.twitter.com/glcLGbPqBU

And if this wasn’t awkward enough, a second video follows a similar theme. In this one, May initially appears to be talking to colleagues. But they then carry on and she is left walking by herself. Again, looking particularly uncomfortable:

This isn’t the only snub May received from the EU. She was also excluded from attending a dinner with other European leaders. And while Downing Street claimed it was “untroubled” by her exclusion, it is becoming clear just how ostracised she now is.

And it isn’t surprising that other leaders want to exclude her. They want to informally discuss Brexit. But, time and again, May has proved she doesn’t know what Brexit means. There was “Brexit means Brexit”. The “red, white and blue Brexit”. And now, it looks as though Brexit could take ten years.

Standing awkwardly in the corner

For anyone who’s ever experienced the unpleasant feeling of being an outsider at a party, it’s almost enough to engender sympathy for May. Almost. But then all you need to do is remember her government’s continuation of crippling austerity, and the fact that more than 120,000 children will be homeless this Christmas.

And then, watch these videos again and enjoy a small amount of Christmas cheer.

– Support the fight against austerity.