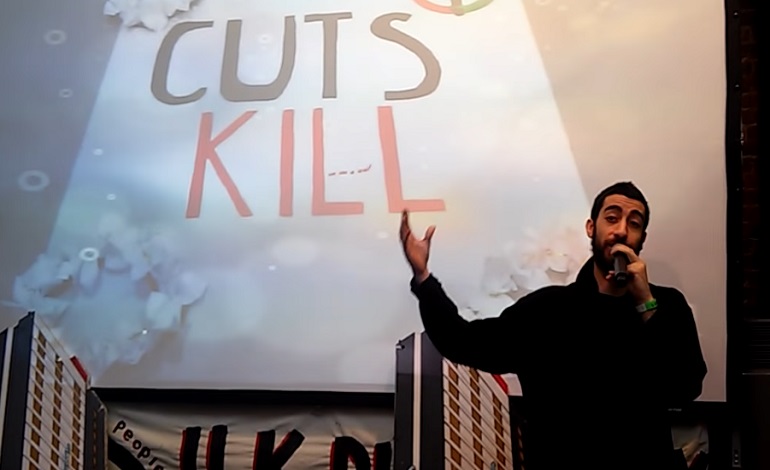 Society is facing the rise of the far right all over the world. But a rapper from south-west London is cutting through divisive politics with his latest track. And he’s asking us to remember one simple thing.

Potent Whisper (aka Georgie Stephanou) has just released his latest track. Called Remember Love, it asks us to take the anger we may feel and turn it into something positive. And speaking to The Canary, Whisper said the track came from how he was feeling last year:

I woke up every day with rage inside me. I stopped rapping. My tongue grew slower and my fists clenched faster. I was physically consumed by a hatred for those we are forced to fight. I almost forgot about love. And it didn’t help anyone in the end, it just made me less effective. This song is a reminder that I am not driven by a hate, but by a love for humanity.

Remember Love is a departure from Whisper’s usual, grime-led work. While the track still has elements of grime in it, choral music is its main driver. And Whisper said the song sticks out from other tracks on New Radical, his forthcoming EP:

The music was produced by a hugely talented brother JEB1. Musically and lyrically the EP is extremely aggressive. It aims to agitate, as opposed to bringing comfort, which I think this song does. For me, it was important to try and bring balance to the aggression, which came in the form of Remember Love.

Whisper performed his spoken word piece Estate of War at the LUSH summit. He described the company’s stance on corporate responsibility as “powerful… unlike organisations like Network Rail who do the complete opposite”. Whisper was citing the controversial redevelopment of the Brixton Arches in London, which he said was “sucking life, money and culture from the community”.

But activism is closest to Whisper’s heart. Hence the positivity of Remember Love. He says with society led “by people who actively promote division and hate”, love is our most powerful weapons:

Politicians and media portray ‘activists’ as aggressive or militant. So making the decision to display love reminds the public that we are normal people with normal feelings, just like them. Displays of love smash the narrative that we are some type of thugs or extremists. But ultimately if love no longer exists, then we no longer have the very thing that we were fighting for in the first place.

I think rage and hatred are natural emotions to feel, for any compassionate person, when faced with such evils. But it just seems to me that if we allow ourselves to become driven by hate, we let them strip us of the very thing that made us different to them in the first place. Love. The reason most of us started campaigning. Love.

– Find out more about Potent Whisper.