Workers come out in force across the US, sticking two massive fingers up at Donald Trump [TWEETS] - Canary 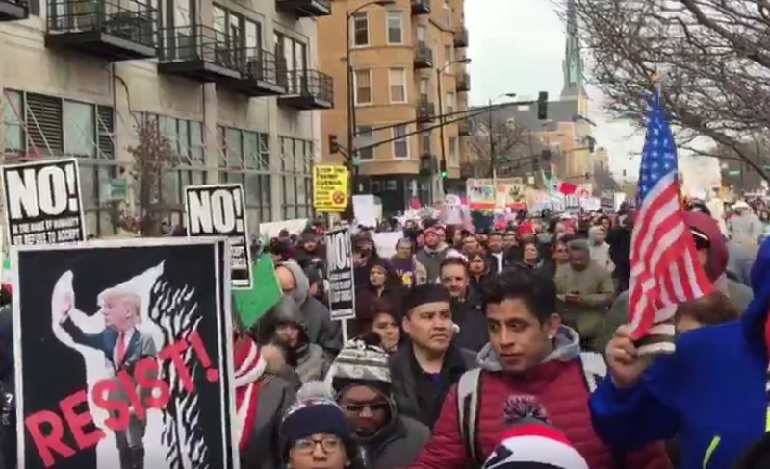 On 16 February, immigrant workers in the US sent a powerful message to Donald Trump. And many Americans joined them.

Their goal was to show the anti-immigrant Trump Administration that the US economy needs immigration, and would run into serious difficulties without immigrant labour. Around the country, said The New York Times:

carpenters, plumbers, cooks, cleaners and grocery store owners decided to answer [the call] and not work on Thursday as part of a national “day without immigrants” in protest of the Trump administration’s policies toward them.

And numerous Twitter users hammered home the point about the US needing immigrants:

Tonight before you eat dinner, make sure to thank Jesus.

Not Jesus Christ, Jesus the immigrant who picks your food.#DayWithoutImmigrants

How to really end illegal immigration

CNBC recently explained how illegal immigration is all about demand, insisting that:

the government provides only about one third as many visas as needed by U.S. businesses, primarily in agriculture and construction, even as these businesses are unable to find Americans to fill these jobs.

In other words, the demand in the US for undocumented workers helps to fuel illegal immigration.

They are taking the jobs no one else wants… picking fruits and vegetables, dairy and other agriculture, construction, lawn work, and indoors, house cleaning. Most of these jobs pay around the minimum wage, and often involve travel and difficult working conditions. Very few Americans aspire to these jobs.

And it stressed that:

about half of the farm workers in California are undocumented… they are an essential component of the agricultural business model in the U.S.

Issuing an appropriate number of accessible visas, the outlet said, would help to cover domestic labour needs, and take away the incentive for immigrants to jump the border. And once the demand from US employers was met, they would no longer need to hire undocumented workers – making illegal immigration even more unattractive.

Many American citizens and business owners stood alongside their immigrant neighbours and colleagues on 16 February in opposition to Trump’s anti-immigrant policies and fearmongering.

Others on Twitter, meanwhile, reminded us that the United States of America was built on immigration:

This is what a REAL #DayWithoutImmigrants should look like…. pic.twitter.com/DJ5BB69xSw

Everyone else came from other countries willingly or on slave ships. pic.twitter.com/RsWDApz3qW

And that’s a message that all American citizens should remember.

– Also see previous Canary articles on the topic of immigration.