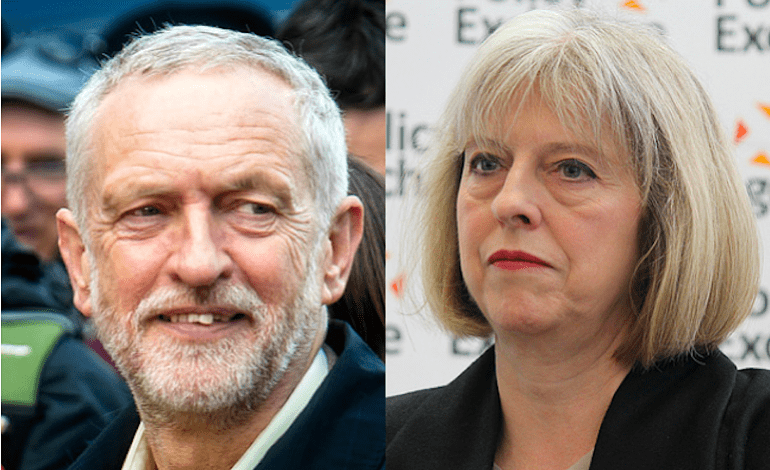 It’s almost one week since Prime Minister Theresa May called a snap general election. And between the incumbent Tory government and the opposition led by Jeremy Corbyn, it’s now clear who is really seeking a mandate from Britain.

May claims to be carrying out the “will of the people” through Brexit; a choice that in itself was meant to allow people to “reclaim” democracy. In holding the election, she says she’s seeking a mandate to deliver Brexit. But she hasn’t quite grasped the concept of performing the ‘will of the people’. Because while Corbyn is opening up his policy pledges for further input from the general public, May is relying on her elite MPs to tell her what direction her manifesto should take.

522 MPs, including Corbyn, supported the decision for an early election. And he has suggested, since last year, that Labour is ready for it. And Labour has made ten main pledges. These revolve around public control of public services; and ensuring that every individual has access to basic wants and needs like education, housing and employment. Labour also promises to make health and social care secure; and to put justice and rights at the centre of domestic and foreign policy making.

But if you don’t agree with these policies, the party is directing you to its policy forum. So people can contribute to what those policies look like.

The Conservatives, meanwhile, have a manifesto in place from the last general election. It centres on reducing government debt, alleviating taxes, reducing welfare support, and imposing stringent counter-terrorism measures. The negative impacts of many of these policies have been profound. Their policies surrounding people with disabilities, for example, led the UN to rule that the conditions the UK has imposed on them go against basic human rights.

May is trying to distance herself from various past manifesto promises. But rather than looking to the public – who represent a cross-section of political views and diverse needs – to forge new policy, May is asking her fellow Tory MPs to scramble together and help write one.

One MP suggested that May shouldn’t worry about UKIP so much, but needs to focus on floating voters. He said:

The manifesto will not be expansive, mainly because the two main issues – the economic and Brexit plan – are not changing and are clear. But it should have some bolder policies than what the prime minister has proposed to date on supporting those on modest incomes, with fresh and distinctive welfare, housing and childcare policies. To counter Labour’s attacks, the Tories will need to work harder at showing commitment to improving comprehensive schools and the NHS.

This could be an opportunity for May to dilute her party’s austerity agenda. But while we contemplate the words that are coming out of party leaders’ mouths over the next seven weeks, let’s keep in mind their records. May has kept her cards close to her chest, creeping through policies and legislation, often under the media radar. This has included creating new grammar schools rather than focusing on improving comprehensive education. And also on the increasing privatisation of the NHS, while underfunding critical services.

May’s approach doesn’t seem to be focused on understanding the entire country’s concerns. But Labour’s policy forum means the country as whole – not just Labour members – can have their say.

And these two approaches show another key difference between the UK’s main two parties right now. Despite how much May says she is delivering on a Brexit promise.