A shop worker’s election image shows why the Tories want to talk Trident, and it’s going viral - The Canary 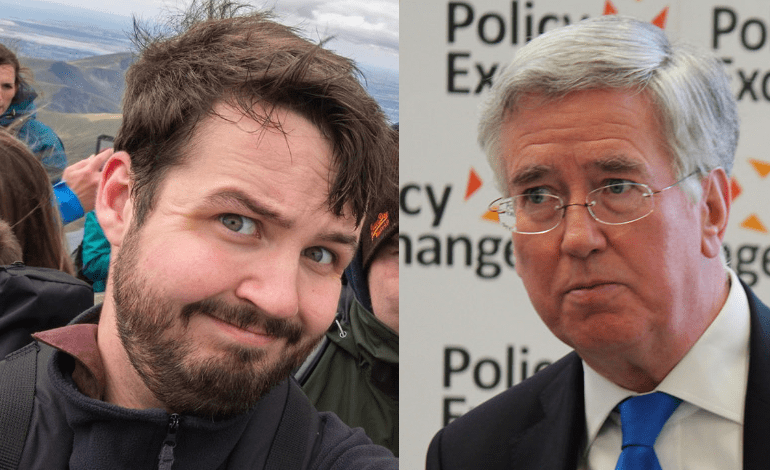 A shop worker’s election post shows why the Conservatives want to talk Trident. And it’s going viral. Defence Secretary Michael Fallon kicked off the week by trying to suggest that Labour Party leader Jeremy Corbyn is a security threat.

But a widely-shared Facebook post from Mike Petty shows why the Conservative Party may want to point at enemies. Theresa May’s electoral mastermind Lynton Crosby has a longstanding strategy of playing to fear, using it as a distraction.

‘You can’t trust politicians, they say one thing then do another.’
That right there, is a sentiment shared by many people. But it got me thinking, if you can’t be sure what they’ll do, what you can be sure of is what they’ve done, specifically their voting records from parliament.
So I had a look, and went to the effort of making a chart of a few key issues and how both Corbyn and May voted on those issues. 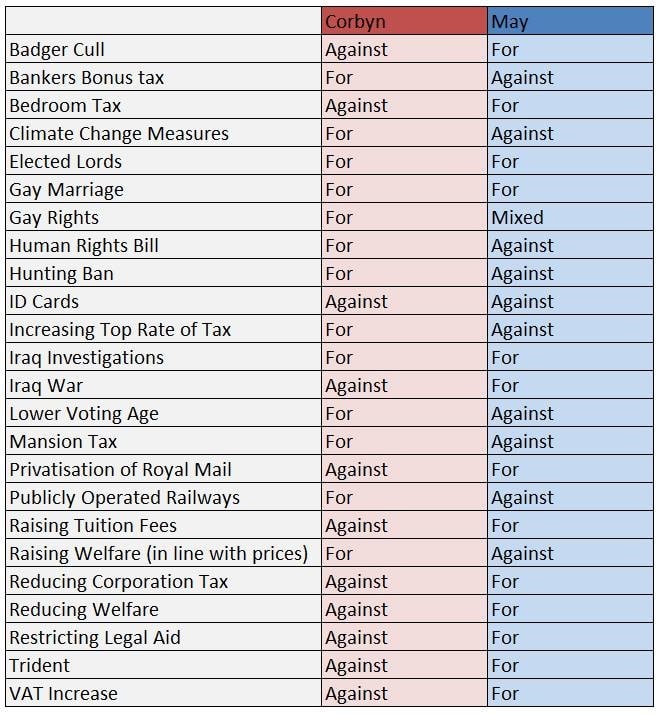 Petty made the chart using They Work For You, which documents the voting records of our representatives. He used it to point out that Corbyn’s rhetoric consistently matches his actions, unlike most politicians.

The Tory strategy seems to be a distraction from the record shown in the chart. The Defence Secretary claimed Corbyn would put the “security of our country at risk”. In the process, he said he would use nuclear weapons as a “first strike”, causing alarm about what is supposed to be a deterrent.

But Fallon is trying to reverse reality by attacking the Labour leader. The 2003 invasion of Iraq further destabilised the region, led to the death of around 1 million Iraqis, and provided fertile ground for the rise of extremist groups such as Daesh (Isis/ Isil). It was based on Tony Blair’s ‘dodgy dossier’ – a fabrication paraded as conclusive evidence across the media.

As the chart shows, May voted for the invasion of Iraq despite being in opposition at the time. And Corbyn voted against his own party to oppose the war.

In bed with Donald Trump

The prospect of a neoconservative foreign policy seems even more dangerous given May’s unflinching support for Donald Trump. Demonstrably, the Conservative government’s position on Syria changes according to what Trump happens to think on any given day. Foreign Secretary Boris Johnson has U-turned four times in less than a year on whether the government supports regime change in the region. Johnson’s stance flip-flops according to Trump’s policy.

Moving back from foreign policy, the Tories’ offer still looks dangerous. Since the Conservatives came to power through a Lib Dem coalition in 2010, police forces across the country have suffered major cuts. And as a result, there are now 20,000 fewer police offices in the UK than there were in 2009. That is a 14% drop in officers in less than a decade.

With the Conservatives, we have a foreign policy aligned with Trump and police services hit heavily by austerity. We also have a long record of defending the interests of powerful corporations against public services and people.

The fearmongering about Corbyn seeks to distract from the information we see in Petty’s chart. The shop worker’s Facebook post encapsulates the common sense logic of what matters in an election: policies and trusting our representatives to enact them.