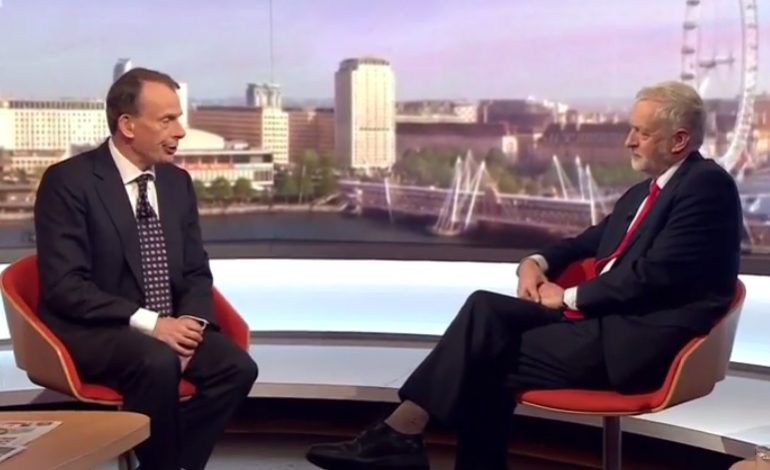 Faced with a real socialist alternative, the Conservative Party is deploying its dirty-tricks armoury with all guns blazing. And the media is colluding all the way.

On Sunday 23 April, the BBC‘s Andrew Marr Show conducted an interview with Labour leader Jeremy Corbyn. The focus was on the use of nuclear weapons and Corbyn’s well-known historical rejection of these horrific weapons of mass destruction (WMDs). And within hours of the interview, the Tories were – as if on cue – launching their own nuclear attack on Corbyn’s response.

But this follows a pattern. Not just against Corbyn, but against the Labour Party in general.

Marr obsessively probed the Labour leader about his attitude to nuclear strikes and the use of the Trident missile system, doing his utmost to trip Corbyn up.

This morning we learnt that Jeremy Corbyn would refuse to strike against terrorists, dismantle our nuclear defences and fail to control our borders.

But a Labour spokesperson emphasised that, while it was Labour policy to renew Trident, the Conservative Party is the real security risk:

We also want Britain to do much more to pursue a proactive, multilateral disarmament strategy… Let’s be clear that it is the Tories’ spending cuts and broken promises on defence that are putting Britain’s security at risk. Under them the Army has shrunk to its smallest size since the Napoleonic Wars. Despite the Tories’ pledge before 2010 of ‘a bigger army for a safer Britain’, they slashed the army from 102,000 in 2010 to 80,000 in 2016, breaking a manifesto commitment to keep it at 82,000. Knee-jerk decisions since 2010, like scrapping Nimrod, HMS Ark Royal and the Harrier jump jets, have weakened our defences and cost British taxpayers millions. The Air Force has been forced to rely on allies to track Russian subs off the UK coast, while the size of the Navy’s fleet of frigates and destroyers has fallen to just 19.

Nuclear deterrence contrary to all logic

Corbyn was unambiguous on the use of nuclear weapons. He told Marr:

The ‘logic’ of the nuclear deterrent is that no side in a conflict would be crazy to deploy WMDs. However, the Conservative Party may prefer otherwise.

The day after the Marr programme, Defence Minister Sir Michael Fallon was geared up and ready. He didn’t mince his words and, referring to the interview, said:

That’s chaos, but it’s very dangerous chaos that would put the security of our country at risk.

The implication being that it is Corbyn who would put the security of Britain at risk.

Part of a pattern

It was reminiscent of another Marr interview, on Remembrance Sunday 2015. On that occasion, Marr spoke with a serving general, Sir Nicholas Houghton. Houghton’s comments on Corbyn’s nuclear weapons policy were to the point:

It would worry me if that thought was translated into power.

It is a matter of serious concern that the chief of the defence staff has today intervened directly in issues of political dispute. It is essential in a democracy that the military remains politically neutral at all times. By publicly taking sides in current political arguments, Sir Nicholas Houghton has clearly breached that constitutional principle.

But although Houghton broke with convention by interfering in the political arena, David Cameron gave him his full backing:

The chief of the armed forces… made a point about the credibility of the deterrent. He made clear he wasn’t talking about a personal thing.

And there are other examples of interference in politics by the military. Shortly after Corbyn was elected Labour leader, an unnamed serving general claimed [paywall] the armed forces could stage a mutiny (which is contrary to the 1955 Army Act [pdf]) if Corbyn was prime minister:

The general staff would not allow a prime minister to jeopardise the security of this country and I think people would use whatever means possible, fair or foul to prevent that. You can’t put a maverick in charge of a country’s security. There would be mass resignations at all levels and you would face the very real prospect of an event which would effectively be a mutiny.

The general added [paywall] that the military would take “direct action” to ensure a Corbyn government would not be able to carry out its mandate.

And Corbyn is likely not the first target of such a destabilising campaign.

Famously, General Sir Walter Walker, who set up an organisation called Unison (later Civil Assistance), told The London Evening News in 1974: “Perhaps the country might choose rule by the gun in preference to anarchy”.

So on the day before the 2017 general election, expect a front-page headline in one of the Tory-supporting newspapers saying something like Top General Says Corbyn a Security Threat.

This is not as far-fetched as it sounds. On the same day Corbyn was elected Labour leader, Fallon responded by declaring him a national security risk. It’s all down to the fear factor. And sadly, that tends to work.