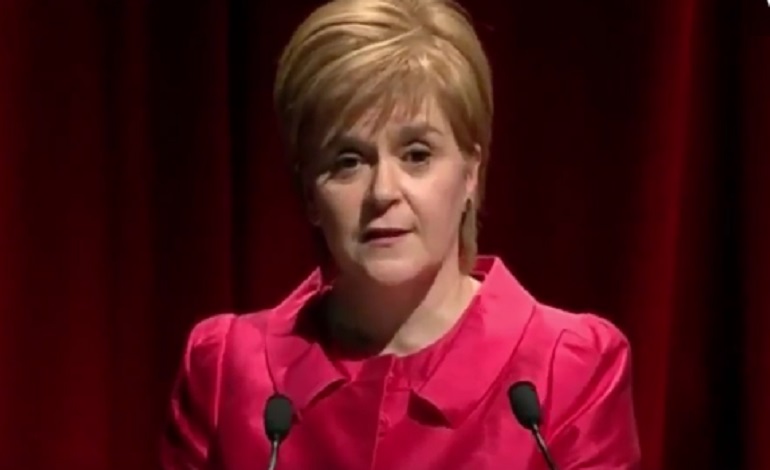 Scottish First Minister Nicola Sturgeon has directly called out the Conservative government for what she called its “hard-line” approach. And in a stunning move, she made a direct comparison between the Tories and the far right.

Sturgeon was speaking at the Scottish Trades Union Congress (TUC) annual meeting in Aviemore. And she warned that the poorest people in society would pay the price of another Tory government. But in a bold move, she went on to say:

The Tory vision should be ringing alarm bells loudly and clearly… Because make no mistake… the hard-liners have taken over the Tory Party. And now, those Tory hard-liners want to take over the country as well… It’s no surprise that UKIP, right now, is losing support to the Tories. Because the Tories are now threatening to take the UK in a direction that, a few years ago, UKIP could only have dreamed about.

🎥 @NicolaSturgeon at #STUC17: "Hard-liners have taken over the Tory party… now they want to take over the country" #GE17 pic.twitter.com/02WBkOwnuq

Sturgeon said that this aping of UKIP by the Tories should “alarm all of us”. But in a seeming hint to Jeremy Corbyn and Labour about a possible ‘progressive alliance’, she said that:

Whatever our politics, we should all stand up against that rightward drift of the country that the Tories are determined to effect.

And Scotland’s First Minister may well be right about the Tories’ drift into UKIP territory. As The Canary has noted, there is little more than a whisker between the Tories’ stance on many policy areas now and that of the British National Party (BNP) in its 2005 manifesto.

But Sturgeon isn’t the only party leader to have likened the Tories to UKIP. Liberal Democrat leader Tim Farron claimed the Tories had “stolen UKIP’s clothes” over Brexit. He also said that Theresa May was making Nigel Farage “look like a liberal”.

It is undeniable that the Tories under May are leaning further to the right than her predecessor David Cameron. And in response to that, people must unite to stop the Conservatives winning power again on 8 June. That means it’s time for everyone who opposes the Tories and what they stand for to come together. To fight them on the doorsteps and on social media. And, as Sturgeon said, to stop them dragging the UK in a direction that “UKIP could only have dreamed about”.