A ghost from Conservative past has come back to haunt Theresa May. And it might cost her the election. - Canary 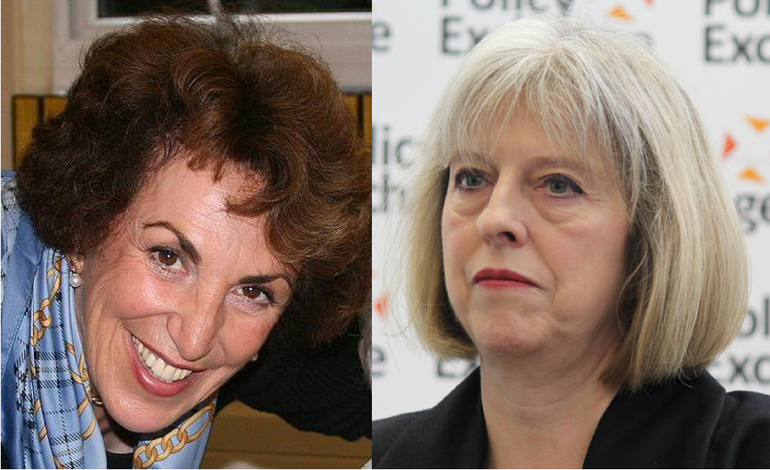 Edwina Currie is a former Conservative cabinet minister, and a key figure of the Margaret Thatcher and John Major governments. But her return to political life in the run-up to the general election is causing Theresa May considerable embarrassment. Currie’s public reaction to child poverty figures comes as an unwelcome reminder of what made the Tory Party so toxic in the first place.

Former Health Minister Currie has made some extremely embarrassing comments on child poverty. She spoke out on 24 April, after a cross-party group of MPs and peers released a devastating report on child poverty. More than 3 million children are in danger of going hungry this summer, when their access to school meals is suspended over the holidays. Currie’s response:

How can "3 million UK children be going hungry in the holidays" when there's a national epidemic of child obesity? Eh?

Within minutes, Currie’s comments were being pilloried.

I'm not an expert but I think they way it works is, they're different children https://t.co/app7ibwHFc

How can I be thirsty when there are swimming pools?🤔🤔🤔 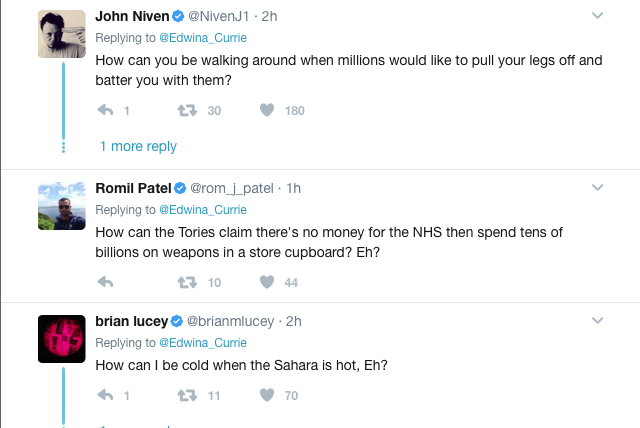 Currie has clearly not learned from the events which led to her 1988 resignation from the Thatcher government. Speaking to reporters amid the salmonella scare, then Health Minister Currie said:

Most of the egg production in this country, sadly, is now affected with salmonella.

This caused widespread panic, as the UK was consuming 30 million eggs a day. It later emerged that just 26 cases of salmonella had been found on UK farms. Amid outcry from farmers and consumers alike, Currie was forced to resign.

The ghostly reminder of Conservative past comes at the worst possible time for Theresa May.

Meanwhile, the opposition leaders have been hitting the road, creating excitement around their campaigns. And there has been a surge in bets for Labour leader Jeremy Corbyn to become the next Prime Minister. A poll, albeit an unscientific one, of over 165,000 viewers on ITV‘s This Morning concluded with 68% of viewers wanting to see Corbyn in Number 10. Just 19% wished to see Theresa May win the general election.

Three senior aides have also quit within the first week of the May campaign. First, the Prime Minister’s Director of Communications resigned. Katie Perrior was a member of May’s dream team, hired less than a year ago. Days later, the Prime Minister lost Lizzie Loudon. Lizzie Loudon was to May as Alastair Campbell was to Tony Blair. Conservative magazine The Spectator described her as “No 10’s secret weapon”. And on 24 April, key adviser Hayden Allan walked. Press Chief to Chancellor Philip Hammond, Allan was a part of the Conservative core team. His sudden departure, just weeks before a general election, is another signal of crisis in Downing Street.

The wheels are off the May campaign. And it has turned what looked like a canny political gamble into a potentially devastating defeat for the Conservatives. There is a lot of campaigning still to do. But with May invisible, and opposition campaigns on fire, UK voters may be about to deliver an upset to the Conservative establishment.