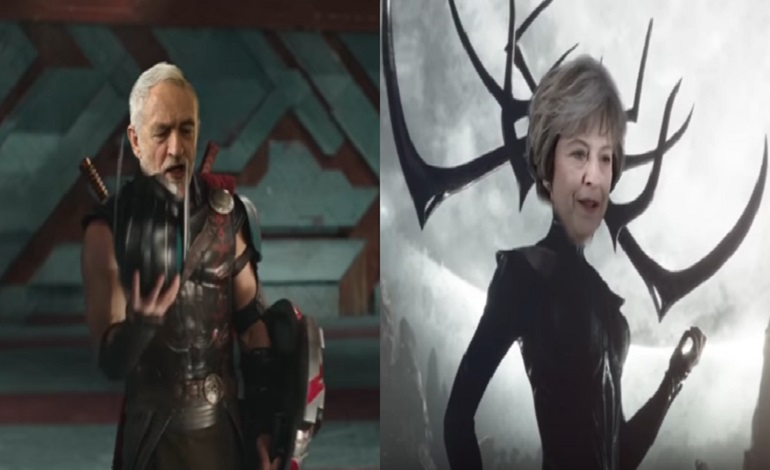 The battle lines in this year’s general election are fast becoming clear. But the team that brought you the now-infamous Hillary Clinton and Donald Trump John Lewis Christmas Ad mash-up have taken things one step further. And the result is possibly the best thing you’ll see this week.

Fortunately, I am mighty!

The Marvel Comics inspired film Thor: Ragnarök is due in cinemas in October. But this hasn’t stopped the lifestyle website Joe creating its own take on the movie. And its inspiration is this year’s general election.

Do I look to be in a gaming mood?

While Joe‘s imagining of the battle between Jeremy Corbyn and Theresa May is a work of fiction, the reality is hotting up. As The Canary reported, ITV This Morning did an online poll of over 165,000 viewers. Although wholly unscientific, 68% of viewers wanted to see Corbyn in Number 10; with just 19% hoping Theresa May would win the general election. There’s also been a surge in people betting on the Labour leader becoming the next prime minister.

But as the polls in general are still not looking good for Labour, people may take that as an indication that the party is doomed to election failure. So it’s probably a good time to recall what Daily Mail columnist Peter Hitchens said about them:

Opinion polls are a device for influencing public opinion, not a device for measuring it. Crack that, and it all makes sense.

As Thor said in the 2012 film The Avengers, “You people are so petty, and tiny”. And Labour supporters would do well to remember this about Corbyn’s detractors. If his supporters really get behind him, then who knows what Corbyn can do? And maybe, just maybe, Joe‘s vision of the election will become a reality.