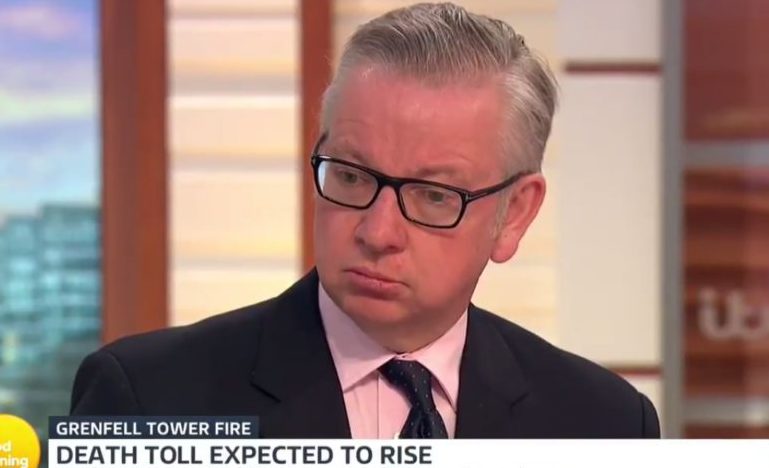 Newly appointed environment minister Michael Gove was roasted by Good Morning Britain host Piers Morgan, regarding the government’s response to the Grenfell Tower fire. Gove was repeatedly grilled by Morgan over the number of issues that have now arisen since the disaster.

What is being done to help the homeless residents of the #GrenfellTower? @piersmorgan, @susannareid100 and @michaelgove discuss … pic.twitter.com/TwwuGTcoA9

Take it or leave it

Morgan challenged Gove over reports that residents have been given little financial assistance since the fire and are now faced with the prospect of relocating as far away as Manchester. This has left many residents worried about where they are actually going to live. Morgan stated:

If you had lost your home and it’d been burned to the ground with every possession you have and I said ‘here’s £500 and, by the way (as in some cases we believe), we’re going to move you and your family to Birmingham, Manchester or further north, take it or leave it – that’s it’, you’d be outraged wouldn’t you?

I used to live seconds from where the Grenfell Tower incident occurred. I went there last night to chat to some friends and others who live adjacent and indeed some of the families in the immediate area.

This response seems somewhat out of touch when you consider some families have been given as little as £10 a day to live on since the fire. On Sunday, film producer Nisha Parti pointed out that residents did not have access to funds raised by donations. She commented:

She goes on to mention the chaos surrounding the housing of people who literally have nothing left:

No one is telling us where it is. Victims will go into hotels, arriving at hotels with no one from the council to greet them, to check them in, to look after them, to give them clothes and food.

Back to the dark ages

Labour MP David Lammy accused the government of behaving like we were in Victorian England after meeting several people who have had to survive on £10 and help from charities. He also pointed out that the authorities should be better placed to deal with the aftermath.

We know how to do this, we did it after the riots, we do it after floods

Lammy went on to lament the obvious lack of government officials when helping the victims:

So you’ve got to ask why these people in Kensington and Chelsea are not getting it? What’s different to them than exists in the rest of the country? It’s an outrage, it’s a scandal, it’s appalling.

Prime Minister Theresa May admitted that government support for the families was not good enough, and vowed to ensure those affected were re-homed within 3 weeks. The PM has been widely criticised for misjudging the mood of the residents since the disaster.