Theresa May has received some bad news about her DUP deal. It's being put to the ultimate test - The Canary 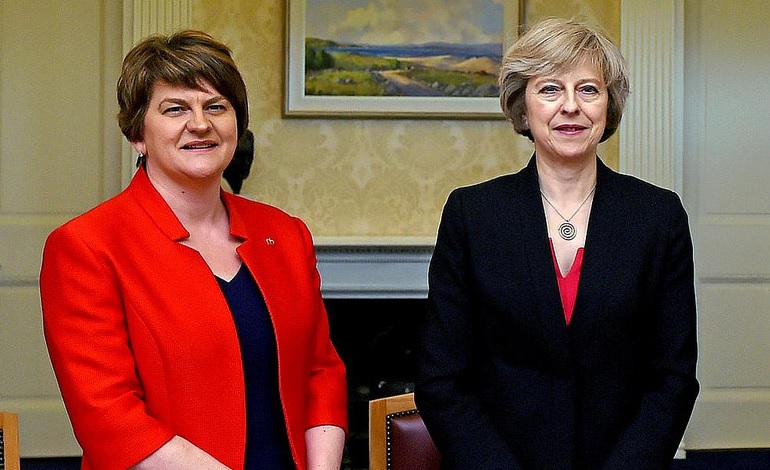 Theresa May’s government is on course to have to defend its Democratic Unionist Party (DUP) deal in court. Because Ciaran McClean from Northern Ireland is launching a legal challenge against it on the grounds that the deal threatens the Good Friday Agreement. And he argues it’s in breach of the Bribery Act.

May’s decision to prop up her weakened no-majority government with a £1.5bn deal with the DUP – including £1bn of new money – has received heavy criticism. Scottish First Minister Nicola Sturgeon called it a “grubby, shameless” deal. While Welsh First Minister Carwyn Jones said it was a “straight bung”. Labour’s Dennis Skinner has also called the arrangement a “protection racket”.

Now a Green Party member, who unsuccessfully stood for the party in the June election, has decided to bring a legal challenge against it. McClean said:

I have spent most of my life campaigning for peace in Northern Ireland.  The deal concluded between the government and the DUP threatens everything we’ve worked so hard for and I’m bringing this case to ensure the government is held to account.

The mental health worker is attempting to crowdfund the legal action. The campaign has raised over £18,000 at the time of writing. Solicitor David Greene is taking up the case. The partner at Edwin Coe solicitors previously represented Deir Tozetti Dos Santos, one of the successful lead claimants in the Article 50 challenge in the Supreme Court. On his crowdfunding page, McClean said of the deal:

My claim is that as a citizen I expect my Government to honour its obligations under the Good Friday Agreement and not to bribe others with money so that it can stay in power.

McClean’s legal team plans to issue high court proceedings in the coming week. It has already had contact with the government over the matter. But McClean says the government’s response failed to address the “fundamental issues behind this corrupt deal”.

A former government lawyer and Tory MP, Alberto Costa, claims the deal was “transparent and lawful” and that the bribery accusation is “spurious”. He also added that it was “vexatious”.

And the challenge is no doubt “vexatious” for the Tory Party. Numerous people have characterised the deal as a bribe. And over 750,000 members of the public signed a petition on the controversial move, which described it as a “disgusting, desperate attempt to stay in power”. Now the courts will get to determine whether the deal is above board by their specific standards.

But to use a favoured phrase of Tory politicians: “if you have nothing to hide, you have nothing to fear”. And the government insists the deal isn’t a cash-for-votes bribe. So it can just sit back, calmly as our democratic, rule of law system does its work.

– You can support McClean’s crowdfunder here.