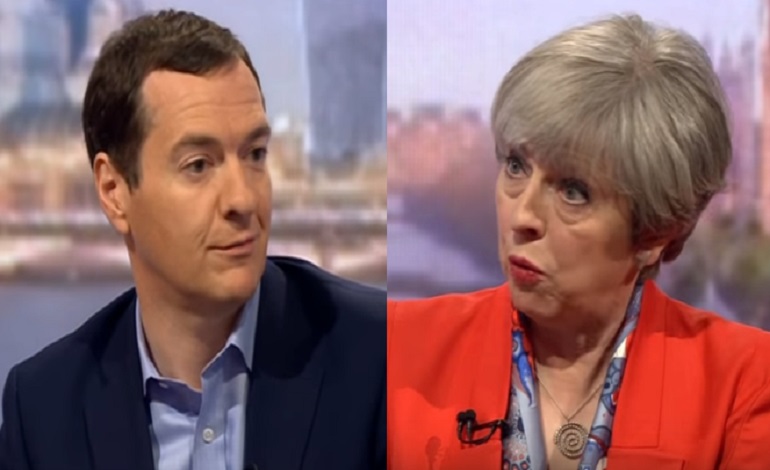 George Osborne’s role as Editor of The Evening Standard has not been without controversy. But of late, the former Chancellor has used his position to repeatedly undermine Theresa May. And the latest round of boot-sticking by Osborne into May is possibly the funniest yet.

As The Canary previously reported, May will apparently announce in a speech on Tuesday 11 July that she is looking to work with the Labour Party on policy making. The PM is wanting to work with Jeremy Corbyn’s party to “tackle” the “challenges” the UK faces. According to The Guardian, May will say:

At this critical time in our history, we can either be timid or we can be bold. We can play it safe or we can strike out with renewed courage and vigour, making the case for our ideas and values and challenging our opponents to contribute, not just criticise …

But while First Secretary of State Damian Green was rolled out (somewhat unsuccessfully) by the Conservative Press Office on Monday 10 July to promote May’s new vision, other Tories were less impressed. And it was perhaps Osborne’s Evening Standard which summed up the situation the best:

Mutiny on the Tory Bounty

It’s not the first time Osborne’s paper has criticised May. On 30 May, days before the general election, it launched a scathing attack on the Tory leader’s campaign, saying:

The Conservative campaign has meandered from an abortive attempt to launch a personality cult around Mrs May to the self-inflicted wound of the most disastrous manifesto in recent history… The result can be summed up by what we imagine to be the conversation around the breakfast table in Downing Street: ‘Honey, I shrunk the poll lead’.

All aboard the HMS Mayhem

And The Evening Standard‘s open criticism of the PM comes at a time when her leadership already looks to be in free fall:

But May brushed off the apparent disquiet over her leadership. When asked by a journalist at the G20 Summit on Friday 7 July whether she’d be PM in a year or two’s time, she said:

Last week was pretty dire for the PM. With MPs openly making her walk the plank, usually supportive newspapers awash with stories about leadership challenges, and a less-than bountiful appearance at the G20 Summit, May looked like she was sinking. Fast. But if she thought this week might offer some calmer waters, it looks like her proverbial shipping forecast was out. As it’s only Monday, and already the not-so-good Ship Theresa has been hitting icebergs. Will her heart go on as leader? Or is she merely rearranging the deck chairs on her very own Titanic? Time will tell…