The government hid evidence from us. And the High Court just made a horrific ruling as a result. - The Canary 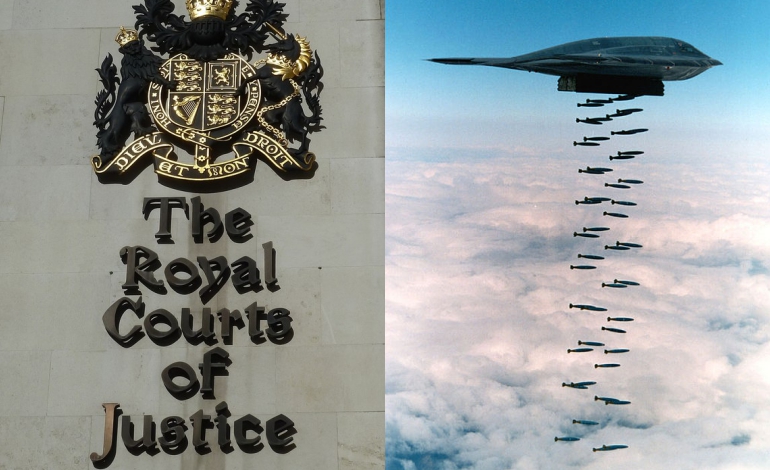 By reportedly providing ‘secret evidence’, the Conservative government has managed to convince the High Court that UK arms sales to Saudi Arabia are legal.

The legal action brought by Campaign Against Arms Trade (CAAT) aimed to stop arms exports to Saudi Arabia because there is a “clear risk” that the weapons might be used in “a serious violation of International Humanitarian Law”.

But CAAT is undeterred. And it’s planning to appeal the verdict. Meanwhile, activists are arguing that, if the courts won’t intervene to stop the arms sales, then it’s down to all of us to take action to stop the trade.

CAAT took the action because it believes that UK weapons are being used illegally in Yemen. According to the UN, over 10,000 people have been killed as a result of the war. Vital infrastructure, including schools and hospitals, have also been targeted. There are now millions of displaced people in Yemen. And according to UNICEF, a child dies in Yemen every ten minutes from preventable causes.

But despite this destruction, the UK government has continued to license arms to Saudi Arabia, largely to use in Yemen.

Since the Saudi-led bombing of Yemen began in March 2015, the UK has licensed £3.3bn worth of arms to the Saudi regime, including:

And there are further problems with the court case. According to CAAT, half of the hearing was in closed sessions. This means that not only were the public not allowed to attend, but that legal representatives from CAAT weren’t allowed to hear or challenge the evidence either.

This creates serious problems in terms of evaluating and being able to challenge whatever the government put forward to try and justify its role in arming Saudi Arabia. Rosa Curling, a solicitor for Leigh Day who represented CAAT, stated:

Nothing in the open evidence, presented by the UK government to the court, suggests this risk does not exist in relation to arms to Saudi Arabia. Indeed, all the evidence we have seen from Yemen suggests the opposite: the risk is very real. You need only look at the devastating reality of the situation there.

Andrew Smith from CAAT described the verdict as “disappointing”. He also said:

Every day we are hearing new and horrifying stories about the humanitarian crisis that has been inflicted on the people of Yemen. Thousands have been killed while vital and lifesaving infrastructure has been destroyed.

This case has seen an increased scrutiny of the government’s toxic relationship with Saudi Arabia. It is a relationship that more than ever needs to be examined and exposed. For decades the UK has been complicit in the oppression of Saudi people, and now it is complicit in the destruction of Yemen.

Curling, meanwhile, expressed hope that the case would be successful on appeal:

We hope very much the court of appeal will consider CAAT’s claim as a matter of priority. Our government should not be allowing itself to be complicit in the grave violations of law taking place by the Saudi coalition in Yemen.

But as Twitter users pointed out, there’s not just one way to stop the arms trade:

Others provided links to the arms dealers around the country where protests could take place:

It's a dark day for the UK's complicity in war and repression. #StopArmingSaudi This might come in handy https://t.co/y6VK3Gsm4E https://t.co/DbkDj6X2d4

Others reminded people that there is a big arms fair happening in London in September; and that, if we’re appalled by the judgement, then we can all take action to stop the fair:

If you think today's verdict is outrageous, remember that the Saudis and their arms dealers plan to be at the arms fair in London in Sept.

The High Court decision was appalling. And it is heartbreaking that the opportunity for a ruling that could save thousands of lives was missed. But in the meantime, we can get active. We can write letters, protest outside arms companies, and we can stop the arms fair.

If arms sales to Saudi Arabia really are being judged "legal" for now, then surely it's time to change the law? Hope appeal is successful https://t.co/yE2ale4PQ0

And she’s right. If these arms sales are “legal”, then the law desperately needs to change. But in the meantime, there are things we can all do to shut down the arms trade.