One woman’s exceptional story is being told across the country. And its timing is absolutely perfect - The Canary 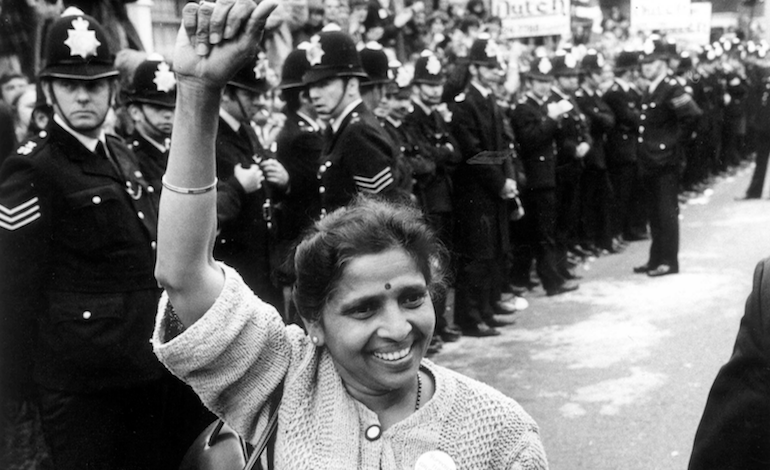 The story of Jayaben Desai and her remarkable fight for justice during the Grunwick strikes, an important industrial dispute in the 1970s, is being relived on stage. And her role in the fight for workers’ rights in the UK is still extremely significant.

The play’s writer Neil Gore, and lead Medhavi Patel, spoke to The Canary about how the play will get across the story of Grunwick, Desai and the key messages to come out of it.

The play, called We are the Lions Mr Manager, is written by Gore from Townsend Theatre Productions. Playing from 14 October, it will use song, poetry, movement and dance to relay Desai’s role in the Grunwick dispute.

With a tradition of political theatre, Gore told The Canary that Townsend Theatre Productions often chooses inspirational and untold stories to depict on stage. This has included productions about the Spanish Civil War and the Shrewsbury strikes. So, Desai’s story fit the brief. But not only that, Gore said:

The story is significant because it has a lot of contemporary relevance. It’s well worth remembering that we’ve been here before. Today we have people being exploited on zero hour contracts. Striking workers are being sacked.

‘We are the lions’

The Grunwick dispute kicked off on 20 August 1976. A group of female workers, mostly of South Asian origin, walked out of Grunwick film processing factory in north-west London. They were protesting their low wages and the conditions they were working in. And it was Desai who made the first step after her manager tried to force her to do overtime. She notably said:

What you are running here is not a factory, it is a zoo. But in a zoo there are many types of animals. Some are monkeys who dance on your fingertips, others are lions who can bite your head off. We are the lions, Mr Manager.

What followed was a long industrial dispute that has been of massive significance for workers’ rights in Britain. The trade union APEX represented the women. They received wide support from locals, organisations and companies; over 20,000 people joined them on the picket line. And parliament also intervened in the dispute.

Despite losing, people do not generally view the movement as a failure. But rather many view it as an inspiration for others to not be afraid to take action for their rights. It was also a turning point for the trade union movement. As it contributed to anti-union feeling and spurred Margaret Thatcher to impose sweeping changes to industrial representation in Britain.

Outspoken for her time

But this significant event is still not well-known. Even Patel, who will play lead character Desai, did not previously know about Grunwick. Even though she learned she was actually related to Desai later on. Patel said:

Once I got the role I contacted various family members to find out more about this woman. Who she was. And I just hoped to bring a little bit of her to the stage.

And getting to know Desai through her preparation, Patel says she was a woman who was “outspoken for her time”. Patel also says there would be a benefit to including the key event in the national curriculum:

We’re raising a nation of young people who are taught not to question the system. We should be teaching them not to be afraid to question the system. Also, that women are strong. Asian women are strong. Often when people write about women, there has to be some sort of backstory to make them the way they are. Women can’t just be strong in their own right… And that change can happen through non-violent protest too.

Gore says the other key message to come out of the play is the concept of freedom and what it means to people. But it was, ironically, George Ward, the owner of Grunwick, who Thatcher hailed as a champion of freedom, while he refused to recognise the union representing Desai and her co-workers. He said he was standing up for the right to work and the importance of freedom.

Gore and Patel encourage all age ranges to come and see the play. They say the production is highly accessible and aims to be an entertaining evening, not just one for earnest political thought.

The new play will start the first leg of its national tour in Bedford on 14 October. The play will take place in cities across the country including Leeds, Salford, Glasgow, Liverpool, London and Oxford.

– Find out where We are the Lions Mr Manager is playing near you.