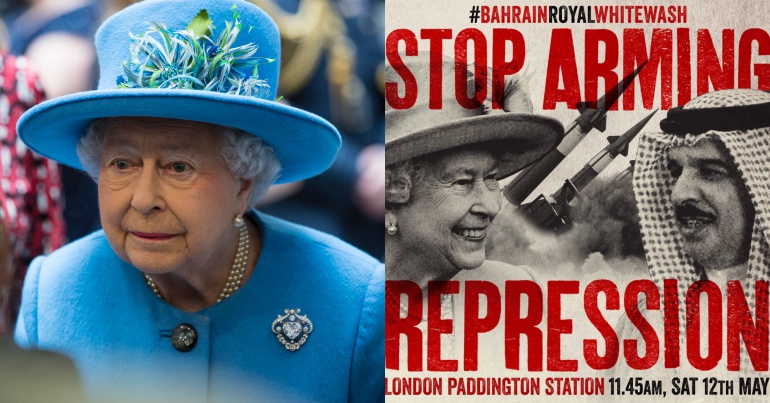 On 12 May, the Queen will spend the day with King Hamad bin Isa al-Khalifa of Bahrain at the Royal Windsor Horse Show (RWHS). Rolex and Land Rover sponsor the Bahraini-backed lavish event held between 9 and 13 May. But there’s strong opposition to the event. Critics have questioned why the Queen is cosying up to a country that is entrenched in a “full-blown human rights crisis”.

The Bahrain Institute for Rights and Democracy (BIRD) has organised a protest in opposition. It called Hamad “one of the most repressive rulers on earth”.

Later today we travel to Windsor to demonstrate against the Queen hosting #Bahrain's despotic King Hamad.

The only reason we tolerate this tyrant is the weapons he buys from us. We must stop selling legitimacy for dictators & #StopArmingRepression.#RWHS #BahrainRoyalWhitewash pic.twitter.com/oJN7sKxCEZ

We don't think Land Rover should be helping with #BahrainRoyalWhitewash at the Royal Windsor horse show. #StopArmingRepression #RWHS pic.twitter.com/c25bIAx216

Organisers of the protest said:

We call upon supporters of human rights, equality, freedom of expression and peace, to stand with us in solidarity and demonstrate.

wants to whitewash his human rights abuses in Bahrain, gain himself legitimacy, and make it easier to secure future arms deals to his regime.

In spite of its horrifying human rights record, the Bahraini regime is a major target for UK arms sales: since the pro-democracy uprising began in February 2011 and was faced with violent suppression, the UK has licensed £82million worth of arms to Bahrain.

The problem with Bahrain

Since June 2016, Bahrain has rapidly deteriorated into a full-blown human rights crisis.

Alongside Saudi Arabia, the UAE, and Egypt, Bahrain has severed links with Qatar. And as part of its alliance with these countries, it has participated in the Saudi-led coalition’s bombing of Yemen. Sayed Ahmed Alwadaei, director of advocacy at BIRD, told The Canary there’s little support within Bahrain for the war against Yemen. But he said that anyone who voices opposition faces brutal treatment from the authorities.

According to Human Rights Watch, since 2016 Bahrain has seen:

Alwadaei confirmed that authorities target Bahraini families for protests that take place abroad. He told The Canary that members of his own family were arrested and tortured. This followed his involvement in RWHS protests in 2017. But as Middle East Eye reported:

the UK government has done little or nothing to investigate reprisal attacks against people in Bahrain following protests mounted by exiled nationals in London,

Despite these documented abuses, the UK government continues to profit from arms sales to Bahrain. According to Campaign Against Arms Trade (CAAT), the UK has licensed £82m worth of arms to Bahrain since the ‘Arab Spring’ uprising in February 2011. It also said:

Meanwhile Bahrain remains a priority market for weapons sales for the government’s arms export promotion unit, and the government continues promoting the Eurofighter Typhoon and other arms sales to Bahrain.

There is no justification for the UK to support this brutal regime. The relationship with the Queen at this lavish event only serves to legitimise Hamad’s position. It truly is a ‘Royal Whitewash”. And driven by arms sales profits, our government is also complicit. Enough is enough and we need to take action.

– Support the BIRD crowd justice campaign, and help raise awareness of this event and the ongoing situation in Bahrain.