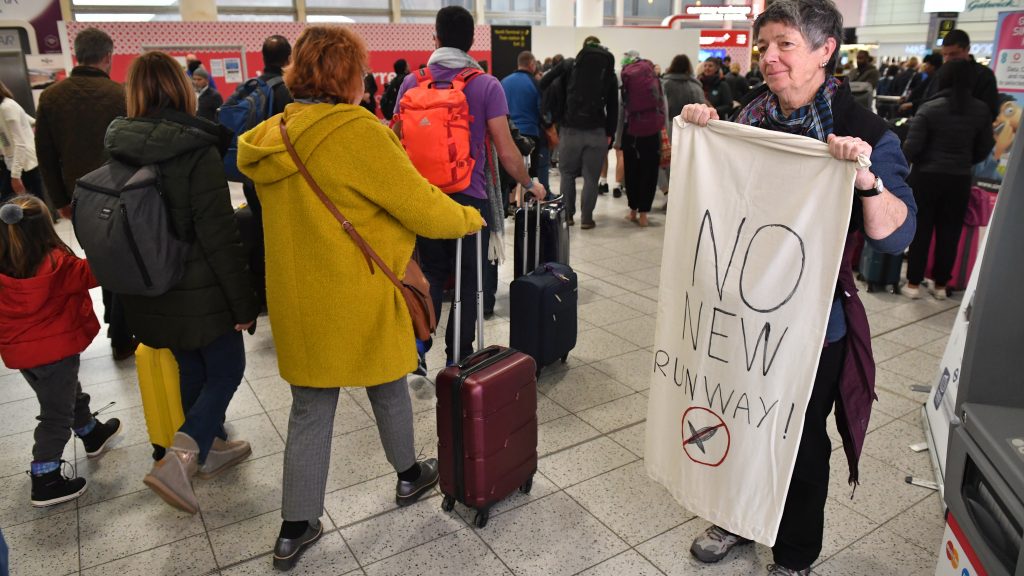 Travellers arriving at Gatwick Airport on Saturday morning were greeted by a man in a tiger costume and other environmental activists.

A handful of Extinction Rebellion (XR) protesters were moving through the international hub to raise awareness of aircraft pollution.

XR activists in disguise gathered by Costa Coffee in the airport’s South Terminal at about 9.30am before revealing themselves.

Protesters were instructed to arrive “incognito” and pretend to be waiting to meet someone amid fears they would not be allowed in to the airport.

However, once assembled, the group of about 10 activists unveiled their full complement of Extinction Rebellion banners, shirts and badges, and began mingling with the public.

Passengers landing on flights from Salzburg, Madrid and Kingston were greeted by activists in bright colours – including a man in a tiger onesie waving a banner saying “Climate Alert”.

Speaking to the PA news agency, he said: “We are already in climate crisis.

“We need to act now and, as we have seen in history, one of the best ways to bring forward actual legislation is to be in non-violent disobedience.”

He said most people at the airport have been happy to talk to him and his XR comrades.

“Some people just ignore us if they are in a rush.

“A few people might get a bit annoyed at us but that’s all right.”

Among the aims of the group is to halt plans to expand Gatwick Airport and get people to cut down on their air miles.

Leaflets handed out apologised for the disruption but said “We need your help”.

A post on Facebook for the Gatwick Action event said: “Let’s get the message out – change can happen – and those who fly have the opportunity to make a big contribution by cutting their flights.”

The peaceful leafleting campaign is being watched over by airport security staff,  who chatted to the activists.