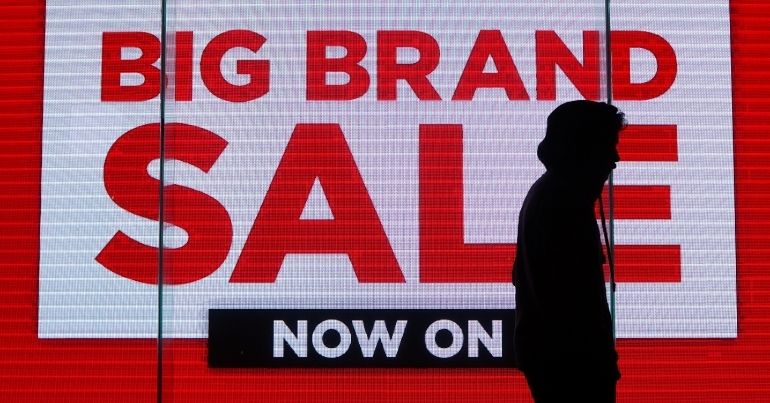 Black Friday saw flash sales in fashion, beauty, technology, and beyond, in which corporations encouraged consumers to buy products at heavily reduced prices. While many took part in the nationwide spending spree, others highlighted the social and environmental costs of the mass consumption these dramatic sales encouraged.

Some took to social media to share their concerns; the GMB Union staged a protest outside Amazon’s London HQ highlighting “dehumanising” working conditions at the company’s warehouses. This year’s Black Friday highlighted the extent of exploitative corporate behaviour.

‘Fast fashion’ giant PrettyLittleThing attracted a great deal of attention for promoting discounts of up to 99% off thousands of items. The most shocking reductions included a 5p dress and a 25p pair of heels, as advertised on their website on Black Friday. Boohoo Group PLC owns PrettyLittleThing and other fast fashion brands such as Boohoo, Nasty Gal and Karen Millen. On 27 November, Boohoo boasted “up to 90% off absolutely everything”, selling dresses for as little as £1.50 and shoes for £3.

One Twitter user celebrated their purchase of 56 garments from PrettyLittleThing for £28, calling it “the best deal ever”. Others bemoaned missing out on sales.

Disturbed by the brand’s sale of clothes at extremely cheap prices, other users took to Twitter to highlight the ethical costs of overproduction and fast fashion.

#BlackFriday just seems to be a race by some retailers to prove how unethical their clothes are? I'd love to hear @OfficialPLT's argument for selling clothing for literal pennies #prettylittlething pic.twitter.com/MjGmp9Sn2L

The plt sale is unethical, 20p item after a 99% discount ??? Fast fashion is disgusting 😖😖

We want to operate a business that is fair to all and kind to the environment and we are working hard to live up to these big ambitions. We know that there is a lot to fix in the fashion industry and we are keen, willing and actively taking part in finding and implementing solutions.

However, it is difficult to fathom how the company, which generates in excess of £1bn, can make a profit or pursue these ambitions while selling clothes at such low price points. While Boohoo co-founder Mahmud Kamani enjoys a net worth of over $1bn, several Boohoo factories failed to prove minimum wage pay, with reports of wages low as £3.50 per hour in August.

An overwhelming number of large corporations encouraged the annual spending frenzy, including ASOS which advertised up to 70% off everything on 27 November, and tech giants promising huge savings. The deals are set to continue, and in some cases accelerate, over the weekend through to ‘Cyber Monday’.

Taking the giants to task

GMB is part of a global coalition aiming to curb Amazon’s ‘monstrous power’. Coalition members include Amnesty International and Oxfam.

This follows a GMB investigation revealing that ambulances were called to Amazon warehouses 600 times in three years, and reports of “602 serious injuries and near misses”. Amazon factory workers shared experiences of “working in constant agony, not having time to go to the toilet and a heavily pregnant woman being forced to work standing”

I told them I could not walk so many miles and I could not pick from low locations. I had a meeting with a safety manager and was also told: “It’s not what you want, it is what we decide”. My manager told me that most women are working on picking until their maternity leave. I know this is true because I saw ladies with huge bumps picking.

It is an awful place to work, can’t breath [sic] or voice an opinion, feel like a trapped animal with lack of support and respect.

Amazon is well known for unsafe, dehumanising work practices which see our members break bones, fall unconscious and have to be taken away in ambulances.

Now, during a pandemic which has made the world’s richest man even more money, they’ve been packing workers into warehouses like sardines in a tin.

Enough is enough. It’s time to curb the power of this monstrous company. It is high time this Government heeded the growing chorus and held a parliamentary enquiry into Amazon’s activities.

A spokesperson for Amazon told The Canary:

This is a series of misleading assertions by misinformed or self-interested groups who are using Amazon’s profile to further their individual causes. Amazon has a strong track record of supporting our employees, our customers, and our communities, including providing safe working conditions, competitive wages and great benefits, leading on climate change with the Climate Pledge commitment to be net zero carbon by 2040, and paying billions of pounds in taxes globally.

The Canary approached Boohoo Group PLC for comment but it didn’t respond by the time of publication.

A long way to go

While there is a growing appetite for sustainable fashion and alternatives to corporate giants such as Amazon, this year’s Black Friday sales demonstrate how much more needs to change before big companies are held to account for profiting from the exploitation of people and the planet.