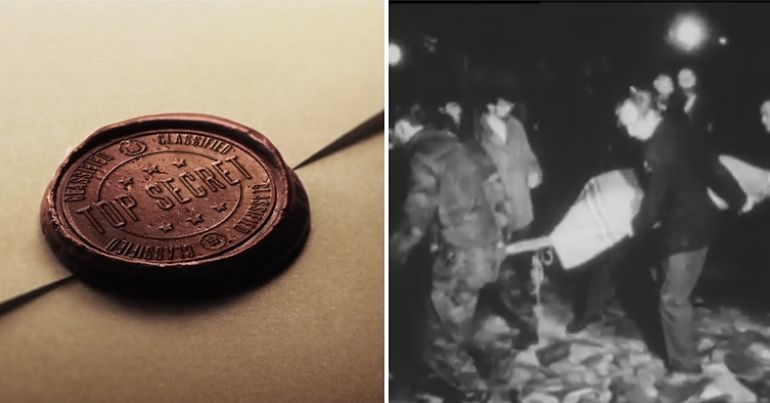 In August 2020, The Canary revealed new files, uncovered by author and activist Ciarán MacAirt of Paper Trail, about the McGurk’s bar massacre in Belfast on 4 December 1971. The British loyalist Ulster Volunteer Force (UVF) blew up McGurk’s, killing 15 innocent people and injuring more than 16. At the time, the bomb was blamed on the IRA, with the police claiming the bomb detonated prematurely while it was en route to its intended target.

The explosion happened in the early years of the conflict between the IRA and British crown forces. And it occurred just months after the British imposed internment on the north of Ireland. Internment led to the arrest of people from a Catholic or Irish republican background. Meanwhile, people from a Protestant or British loyalist background remained largely unaffected by it.

the name of the UVF’s original target that evening and showed there was a nearby British army presence that evening also. Moreover, MacAirt claims his revelations connect General Frank Kitson to the atrocity.

MacAirt is a grandson of two McGurk’s bar victims. And on 15 December, MacAirt released more previously unseen documentation related to this bombing. These new documents reveal:

a high-level, coordinated and sustained Security Force and Civil Service plot to deceive the Parliaments of Britain and Northern Ireland about the true circumstances of the McGurk’s Bar Massacre.

Furthermore, they show the manipulation of policy decision-making. MacAirt told The Canary:

the British Army and RUC [Royal Ulster Constabulary – old name for the Police Service of Northern Ireland (PSNI)] knew that the bar was [externally] attacked and that they were knowingly withholding evidence and disseminating false information to Government Ministers at the same time in Stormont and Westminster.

On 10 December, MacAirt issued a complaint and requested that British cabinet secretary Simon Case launch an investigation into his findings.

The uncovered documents reveal a plot to deceive Westminster and Stormont about the true circumstances behind the bombing. MacAirt has reported this to the cabinet secretary.

He claims the new evidence proves high-level officials in the Ministry of Defence (MoD):

peddled known lies about the victims and the explosion to other departments, including the office of the British prime minister, and on two occasions prepared draft statements for the minister of state for defence to publish the known lies in the House of Commons and mislead parliament.

He says this evidence also proves the chief constable of the RUC and the head of RUC special branch:

peddled similar lies at the same time to the Northern Ireland prime minister at Stormont.

In a letter sent to the cabinet secretary seen by The Canary, MacAirt alleges:

Official documents disclosed to me recently under the 2000 Freedom of Information Act prove that government departments and agencies knowingly abused their power by:

(2) recklessly creating and/or circulating false information with the intent of deceiving parliament, the press and the public; and

(3) consciously and/or irresponsibly causing harm to the families of those murdered or injured in the McGurk’s Bar atrocity in Belfast on 4th December 1971.

MacAirt claims officials at the MoD prepared a statement for then minister of state for defence Lord Balniel. But it knew this statement was false. According to MacAirt, the MoD said the explosion and some of the deaths were consistent with the bomb going off accidentally inside the pub. And “perhaps while in transit”.

Then, according to MacAirt, the RUC forwarded false information to Northern Ireland prime minister Brian Faulkner. The RUC’s information claimed the bomb detonated prematurely en route to a target elsewhere in Belfast. It also claimed two of the victims were members of the IRA. MacAirt believes his evidence proves:

The morning after the explosion, a British army report stated:

A bomb believed to have been planted outside the bar was estimated by the ATO [Ammunition Technical Officer] to be 30/50 lb of HE [High Explosive].

As far as can be assessed from the damage and crater caused by the expl [explosion] at Gt George’s St/Nth Queen St, the bomb was placed in the ground floor entrance on the corner of the building that faces into the junction. Guess size to be 40 – 50lbs.

ATO is convinced bomb was placed in entrance way on the ground floor. The area is cratered and clearly was the seat of the explosion. Size of bomb likely to be 40/50 lbs. NOT FOR PR [meaning it shouldn’t be published]

These reports, along with a statement from UVF member Robert James Campbell, confirmed the testimony of eye-witness Joseph McClory.

But as MacAirt’s report alleges, the British army and the RUC colluded “just a few hours after the bomb explosion” to blame the victims for the explosion. They labelled it “a republican own-goal”. A British army log stated:

RUC have a line that the bomb in the pub was a bomb designed to be used elsewhere, left in the pub to be picked up by the Provisional IRA. Bomb went off and was a mistake. RUC press office have a line on it – NI should deal with them.

Then at the same time, the RUC duty officer’s report stated:

Just before the explosion a man entered the licensed premises and left down a suitcase, presumably to be picked up by a known member of the Provisional I.R.A. The bomb was intended for use on other premises. Before the ‘pick-up’ was made the bomb exploded.

peddled known lies about the victims and the explosion to other departments, including the office of the British prime minister, and on two occasions prepared a draft statement for the minister of state for defence to publish the known lies in the House of Commons and mislead Westminster parliament.

Human rights group the Pat Finucane Centre (PFC) uncovered an MoD report prepared for a permanent under secretary of defence meeting in Whitehall on 14 December 1971. It states:

Although no inquest has yet been held into the fifteen deaths caused by this explosion on 4th December, the forensic evidence now available shows quite clearly that five of the victims were killed by blast – indicating that the explosion must have been inside the bar, and raising a very strong presumption that it was caused by the accidental detonation of a bomb being carried by one of the customers – as has seemed likely all along. The Minister of State for Defence is being invited to consider whether to make this point public in a written answer – in pursuance of his undertaking , in his original statement on the incident, to keep the House [of Commons] informed of any fresh information. In the view of Headquarters Northern Ireland it is important to put this point on record, in order to discourage continuing speculation about who was responsible for the explosion. 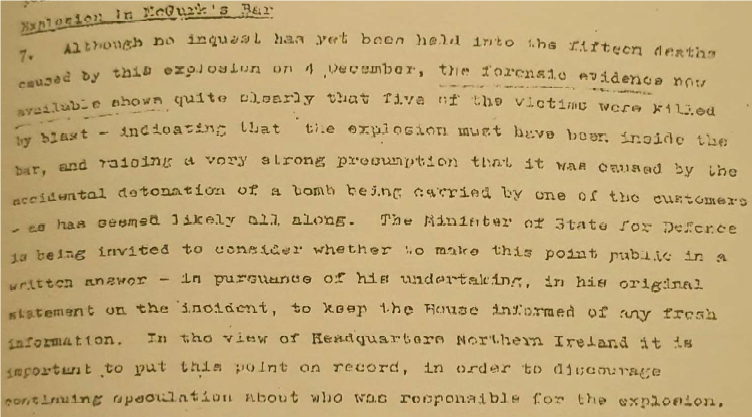 It was agreed that the latest findings which indicated that the explosion in the McGurk Bar [sic] had been the result of a bomb in the bar (by implication in transit there) should be publicised possibly by means of a written Parliamentary Question… Perhaps Head of DS 10 will pursue the matter.

DS 10 was a division of the MoD that provided “information and policy advice to British Ministers and Military staff during the conflict in the early 70s”.

A joint security meeting on 16 December in the north of Ireland included the Northern Ireland prime minister Brian Faulkner and minister of state John Taylor (Lord Kilcooney). Lt General Sir Harry Tuzo and a member of MI5 were also present at this meeting.

But according to MacAirt’s evidence, the British army and the RUC knew this wasn’t true. The Canary contacted the MoD, PSNI and cabinet office for comment. A spokesperson for the MoD said:

We have co-operated with a number of previous investigations into this incident. If anyone believes they have new information relating to potential criminality they should bring this to the attention of the Police Service of Northern Ireland.

As the bombing of McGurk’s Bar is the subject of ongoing legal claims it would not be appropriate for us to comment further at this time.

As legal proceedings are ongoing, it would be inappropriate to comment at this time.

The cabinet office didn’t respond by the time of publication.

Even after nearly half a century, the lies of the British Army and RUC and the lengths to which the British state will try to cover up those lies to this day, still hurt our grieving families and our campaign for truth.

As The Canary has reported, this explosion and several other atrocities took place at the beginning of the conflict. Yet we can only speculate as to what might have happened during that 30-year conflict had they not occurred at all.

We’ll never know how many families and loved ones suffered avoidable grief. And as previous historical investigations failed victims’ families, a credible and independent investigation is long overdue.