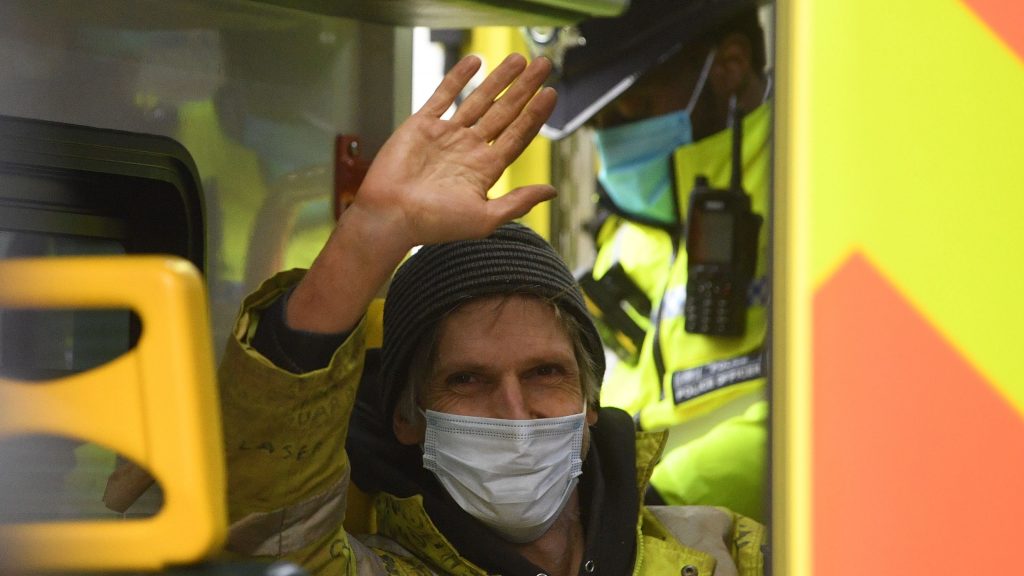 An environmental activist who spent almost a month underground in protest at the HS2 railway line has come out from a tunnel near London’s Euston Station. Geography lecturer Larch Maxey, 48, had his belongings confiscated by bailiffs on Monday and said in a video he “feels fine”, but that medics have persuaded him to go to hospital to “be on the safe side”.

The subterranean system was created in secret by protesters who object to the redevelopment of Euston Square Gardens as part of the high-speed railway line.

In a video posted on Monday, Dr Maxey said:

I’ve basically met my match, they’ve come for me and they’ve rinsed me completely.

They’ve got all my stuff, they’ve got me backed into a corner and at that point I was like ‘OK I’m coming out’.

Just been seen by paramedics and they’ve persuaded me… that it would be a good idea to go to hospital. Just to get things checked out and be on the safe side.

The activist, from group HS2 Rebellion, is likely to face criminal charges “for aggravated trespass or other related offences” as well as penalties for breaching a High Court order issued on February 2, said an HS2 spokesman.

Breaching the order is punishable by a fine, up to two years in prison, or both, the spokesman added.

An injunction was won last Friday against activists who dug the 100ft network of tunnels near the London railway station, which were discovered on January 26.

As part of the ongoing operation at Euston Square Gardens we have successfully removed Dr Larch Maxey from the tunnel.

He was taken out from the tunnel and has been assessed by paramedics. He has been handed over to the Metropolitan Police and will likely face criminal charges for aggravated trespass or other related offences.

The safety of those trespassing and that of the HS2 staff and emergency service personnel in this operation is of paramount importance.

We continue to do all we can to end this illegal action safely, and we reiterate our message to those who remain underground to comply with their court orders and exit the tunnel immediately – for their own safety and that of the HS2 staff, agents and emergency service personnel involved in this operation.

Sustainability researcher Dr Maxey, who has a PhD in geography from Swansea University, is now the fifth person to leave the tunnels, following the exit last week of a 16-year-old boy, who had spent 22 days living underground.