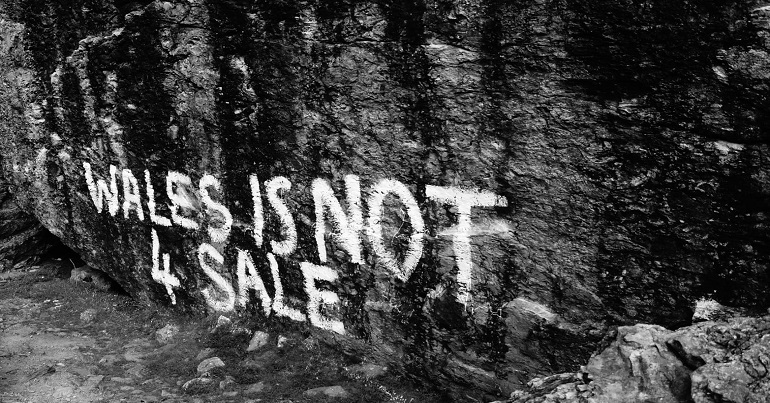 to form a “human dam” across the Tryweryn dam near Bala, as a sign of the group’s determination to prevent the collapse of Welsh communities as a result of the housing crisis.

sign a statement calling on the Welsh Government to “take urgent and radical action to ensure that local communities can control the housing market and planning process in order to secure homes for their people.”

As reported by The Canary in September 2020, campaigners called for action against second homes in Wales. Socialist republican campaign group for independence in Wales Undod, said:

One of the main areas where the crisis visibly exposed the class divide is housing. Housing was an acute issue in Wales before the crisis, and the pandemic has illuminated the extent to which housing precarity impacts savagely on working class people across the whole of Wales.

We can’t wait yet more decades for the Government to take decisive action: our communities are being torn apart as young people are forced to move because such a large proportion of the houses are bought at inflated prices by richer people, often using them as holiday houses or second homes; without strong communities, the future of the Welsh language looks bleak.

Mark Drakeford has already pledged to take action to prevent the injustice, and Cymdeithas yr Iaith will be campaigning to ensure that a series of radical steps are taken to tackle the situation, as opposed to token gestures. Our communities can’t wait any longer.

The campaign has started

Tomorrow (Friday, 21 May), we will start to count down 50 days to the date of the rally by announcing every day names of prominent people who will be coming to the rally to sign the call on the new Government.

Their campaign is already underway.