‘Communities, not capitalism’ as activists demand action on second homes in Wales - Canary 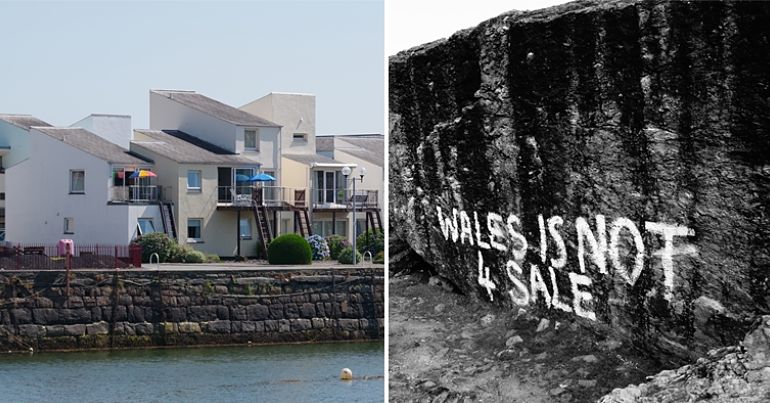 On 26 September, campaigners in Wales marched from Nefyn to Gwynedd county council headquarters in Caernarfon. The march is part of the campaign to demand:

The Welsh language society Cymdeithas yr Iaith wants a new property act to deal with second home purchases. It also wants the Senedd to devolve the land transaction tax to local authorities. Cymdeithas yr Iaith took part in the march, as part of its ‘Nid yw Cymru ar Werth’ (Wales is not for sale) campaign. It calls on the Welsh government to pass a property act that would “go a long way in [resolving] the crisis”.

The Canary spoke to campaigners and Cymdeithas yr Iaith. Bethan Ruth, the language society’s chair, told The Canary it wants to see:

houses as homes, not as commodities

Campaigners point to the large percentage of homes bought in Gwynedd as second homes. In August this year, the Daily Post reported figures from the Welsh Revenue Authority. It said:

almost 40% of properties sold in Gwynedd between March 2019 and April 2020 were purchased as second homes.

These figures for Gwynedd are higher than any other part of Wales. This increase in holiday home purchases has increased house prices. Which means it’s now harder for local people to buy homes in their own community.

The Gwynedd coastal town of Nefyn has seen a surge in second homes being bought since lockdown.

They [local councillors] also want to redefine “affordable housing” to reflect the average salary which is as low as £16,000 in parts of Gwynedd

passed a motion calling for devolution of powers to the local authority to be able to deal with second homes. Because there has to be emergency measures now implemented to deal with how many are swept up and bought from people who are not local. We are being placed out of our area where we’ve been brought up in. It will have a massive effect on our language, which will in effect deplete from all coastal areas in northwest Wales. House prices in coastal areas have skyrocketed an astronomical amount, pretty much overnight, following the coronavirus outbreak. Since the cessation of the lockdown.

the reason the Labour government has been ineffective in dealing with this is because they are reaping the rewards of the land tax.

Tudur’s calling on the government to “delegate powers to the local authority to deal with the matter”. This way they can “control land tax in favour of local people”.

Campaigners fear for the Welsh language. Tudur told The Canary:

It will have a severe detrimental effect on our heritage and our language.

He says this area is “the stronghold of the Welsh language” and it’s “being threatened by second home purchases”. Tudur says the Welsh government is “allowing the death of the language”. Ruth added “that language planning [needs to be] mandatory”. Because she feels learning the language helps integrate people into the community as “the language is open to everyone”.

According to the 2011 census figures, there was a decline of 2% in people who could speak Welsh. The number of people who actually use the language on a daily basis could be even lower.

It goes beyond Wales

It’s something that faces, all of us really, and I don’t think it’s specific to Wales either. It’s happening all over Europe, if not the world. You know, rural areas are increasingly getting less economic investment so young people to move.

Elfed Wyn Jones, chair of the Cymdeithas committee for Gwynedd and Anglesey, added:

There’s an urgent crisis in the functioning of the housing and property market – and whole communities are losing a large proportion of their homes through the market to second homes, holiday homes like AirBnB, and housing for wealthier people moving to retire.

We recognise the challenges second and empty homes can present to the supply of affordable housing in some communities in Wales and understand the need to have the right balance between the economic and social needs of our communities, including creating the right conditions for the Welsh language to thrive. We are on target to deliver 20,000 new affordable homes this Senedd term, and Wales remains the only UK nation to have given local authorities powers to charge higher levels of council tax on both long-term empty and second homes.

Our Land Transaction Tax also includes an additional 3% charge for second home and buy to let purchases in Wales, and we recently changed our eligibility criteria for business support for self-catering properties.

This campaign is ongoing

Ruth said the campaign has particular importance now as political parties draw up their manifestos for next year’s Senedd elections. The campaign to protect the Welsh language and local communities continues.