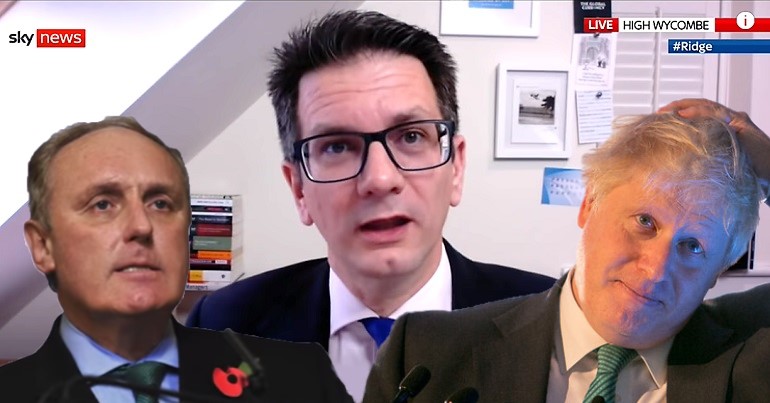 People have been up in arms over rumours about Boris Johnson allegedly lining up an ex-Daily Mail editor to run Ofcom. At the same time, a Tory MP just admitted live on TV why the PM would do this. And it confirms what most of us already know. That Johnson’s government is turning into a one-party state.

The Evening Standard reported that:

A former editor of the Daily Mail has been tipped to become chairman of the broadcast regulator Ofcom.

Paul Dacre, who stepped down from the helm of the newspaper in 2018, is said to be Boris Johnson’s preferred candidate for the job.

The Sunday Times reported that Mr Dacre was ‘wooed’ by the Prime Minister over drinks in Downing Street in February, and is now in talks with Number 10.

If you don’t know who Dacre is, Nick Reeves summed him up well:

Dacre has spent his career injecting the fascist poisons of fear, hate, lies, rabid nationalism, xenophobia, scapegoating of minorities and anti-intellectualism into our society. Dacre is a fascist.

Dacre has been responsible for some of the worst reporting in UK press history. Not least, as BBC News described, was the Daily Mail‘s abhorrent reporting on refugees:

One of the most talked about front pages described a ‘swarm’ of migrants on Britain’s streets – a phrase used by David Cameron in 2015 – while other headlines have linked immigration to pressures on housing, unemployment and crime.

A UN report into the press coverage of the European migrant crisis found the Daily Mail to have ‘exhibited both a hostility, and a lack of empathy with refugees and migrants that was unique’.

As BBC News also noted, Dacre was against increased press regulation in the wake of the Leveson Inquiry. So Johnson wanting him to head up Ofcom probably means one of two things.

“Because he’s a Conservative”

Firstly, that Dacre’s regulation of broadcast media will be light-touch. But that may well only be the case for media he agrees with. And that’s point two. Because Tory MP Steve Baker let slip the real reason Johnson may be lining up Dacre for Ofcom.

Is Paul Dacre an appointment you would welcome for the job of Ofcom Chairman?@SteveBakerHW says he would be “delighted” to see the former editor of Daily Mail appointed Chairman of Ofcom 'because he is a Conservative'.#Ridge https://t.co/Ags3OvGNKR pic.twitter.com/lYgScTDRrw

So, there you have it. Johnson is allegedly giving Dacre the job because he’s a Tory. In other words, Baker thinks that a Tory ally in an independent regulator is a good thing. He seemed to imply this is not unusual. Baker said:

Moreover, Baker thinks that corporate broadcast media has a problem with “moderate, mainstream conservatism”. He thinks that having a Tory keeping an eye on it will sort this out. As Baker said, Dacre and potential BBC boss (and Tory) Charles Moore:

might actually start to look at the way the media functions and ensure there’s some impartiality. I can ensure [sic] you, that from my point of view, time and again during interviews, I felt that there was a consensus thought on the side of the broadcaster, which was not on the side of moderate, mainstream conservatism.

Of course. Because, for example, the BBC and Rupert Murdoch-owned talkRadio and Times Radio are all such bastions of far-left anarchism. Maybe the upcoming other Murdoch venture, plus the Andrew Neil fronted GB News, will help redress the dire left-wing bias in our broadcast media.

Baker’s statements are obviously ridiculous. Not least his dross that the government is an example of “moderate, mainstream conservatism”. As economist Will Hutton summed-up, this is “one-party state” stuff. The slippery slope the UK was careering down just got a whole lot more dicey.