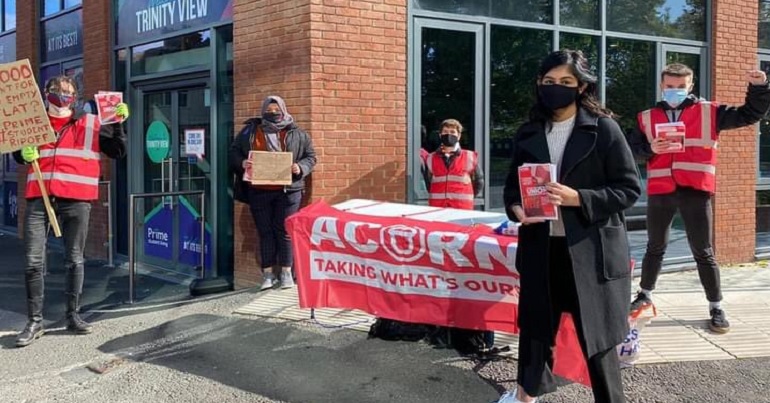 On 26 September, a student housing company called the police on a Labour MP and protesters. This was because they were picketing outside one of the company’s properties. And this story, as well as the one behind the demo, are peak 2020.

The Canary previously reported on Rebecca’s story. She’s a tenant of Prime Student Living in Coventry. It’s a private company that runs halls for uni students. But Prime is also a bit “greedy“. Because it charged Rebecca over £2,000 for her flat when she wasn’t actually living there. This was because she had to go home to the north of Ireland.

I went home [to the north of Ireland] on the 21 March and lockdown was put in place on the 22. I contacted Prime as soon as I came home to inform them that I had left and was not going to be returning for the foreseeable future. So, I asked if there was any way… I could be released out of my contract; or give me a reduced rent rate… They completely refused and said that everyone was asking the same question and they couldn’t do anything about it because I had signed a contract, therefore, I was still liable to pay.

After a lot of backwards and forwards between Rebecca and Prime, it still refused to budge. So, her and her parents had to pay it £2,141.33. This is because she was only in her first year and needed the flat moving forwards.

The grassroots community union Acorn then stepped in to support Rebecca. Previously, Acorn and The Canary have tried to get answers from Prime. But Prime hasn’t answered repeated requests for comment. So, Acorn and Coventry South Labour MP Zarah Sultana decided to pay Prime a visit.

On Saturday 26 September, they set up a demo outside Trinity View. It’s one of Prime’s student halls in Coventry:

🚨PLEASE RT🚨
Today we’ve been picketing outside Trinity View with @zarahsultana, demanding that @Prime_Student #PayRebeccaBack.
Apparently they’re more than happy to call the police on us, but not to respond our campaign.
Expect more from us soon! pic.twitter.com/BF0sU4xviT

Sultana tweeted that Prime’s actions were a “rip-off”:

A student in Coventry had to pay £2141 for an empty room after she followed guidance & returned home when lockdown started in March.

Prime called the police on Acorn and Sultana. But the police clocked what a nonsense that was:

I dunno what to tell ya, Prime Student Living. Maybe you should #PayRebeccaBack and we might go away. #PrimeStudentRipoff https://t.co/cH8VDPNYF3

This weekend we picketed at Trinity View, the accommodation that Rebecca has been forced to pay rent for despite not being able to live there. The action was taken after several months of zero contact from Prime Student Living. They have ignored the 200+ emails sent to their directors as part of our letter writing campaign, as well as the thousands of people sharing our posts on twitter about Prime’s abusive practices.

At the picket, Prime finally responded by calling the police on us!

We were peacefully setting up outside for the first shift when the woman working the desk in the building claimed that the pavement was Prime Student Living property and that we’d need to leave immediately or she’d phone the police.

We held our ground, confident that our protest was legal and safe, and when the police turned up half an hour later, they agreed with us and let us stay exactly where we were! Bit of a waste of police time if you ask us.

After speaking to students coming in and out of the building and warning them about Prime’s dodgy behaviour, we left Trinity View while warning the manager that if they continue to ignore Rebecca, they should expect further action.

Once again, Prime is refusing to budge. It’s quite something for it to call the cops on an MP. But that, combined with Prime’s greedy money-grabbing, sum up 2020 perfectly: the year when, even during a pandemic, wealth still comes before health.