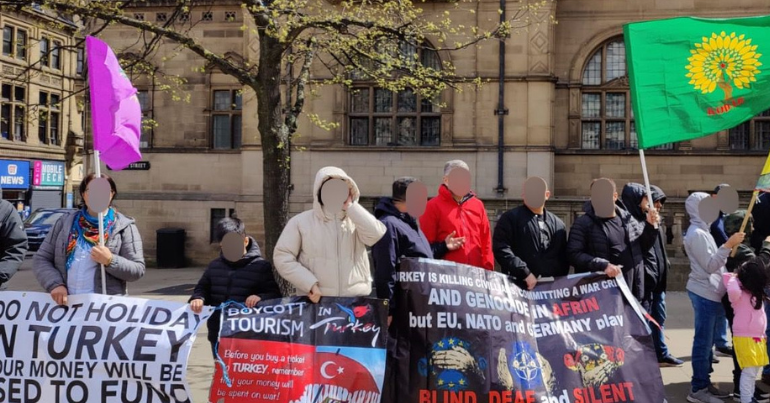 This began, and should have ended, as a peaceful, calm protest showing solidarity with those in Kurdistan. Instead the police reacted in a way completely out of proportion to the protest and the actions of those present. This was a protest with families and young children.

Instead, officers seem to drag one person away, whilst beating others back:

We can now begin to release more footage from yesterday's protest. In this video you can see a peaceful protester being taken away from the protest, whilst those trying to support him are beaten over the head and pepper sprayed. Amongst those pepper sprayed was a teenage girl. pic.twitter.com/FdnklmU4cF

SYMAAG also outline in an earlier tweet that Kurdish flags were ripped away from protestors:

We are shocked at the police violence today during a peaceful protest in Sheffield in response to recent invasions by Erodagn's government in Kurdistan. Kurdish flags were ripped from protestors' hands, who were then beaten and pepper sprayed when they tried to retrieve them. pic.twitter.com/ss4HDD0jK4

SYMAAG explain how the police made their presence felt at the protest. In a statement released on their social media, they explain why they held the protest:

Since Sunday 17th April,  Turkey’s army -one of NATO’s largest armies has been invading parts of Iraqi and Syrian Kurdistan. In response to this attack and in solidarity with Kurdish people resisting the invasion, the Sheffield Kurdish Community and its supporters came together for a rally in front of Sheffield Town Hall on the afternoon of the 24th of April.

They detail how, as the rally was coming to a close, police asked the attendees to hand in their flags:

As the rally ended and people started packing up banners and flags, two policemen approached one member of the community and asked him to hand in his Kurdish flags. The man refused and tried to continue collecting his things, helped by friends. After moving the conversation to the town hall stairs, the police insisted on getting the flags from the man. For about forty five minutes, police and rally attendees argued on the steps.

Because the man held on to his flags, the police then acted forcefully:

The police would not let people go home with the flags and banners they brought. After a while, the man asked if he was under arrest to which the police replied negatively. The police, seeing that people would not give their flags, tried to forcefully grab the flag and the flagpole, which ended up breaking. Police then decided to arrest the man in question and several extra policemen violently pushed away attenders including women, teenagers and younger children. This put families and children in a state of shock, with many crying for help.

People followed, trying to support the man and stop the arrest. The police then indiscriminately used pepper spray and punched people in order to disperse the supporters. Several men, women and a teenager were badly affected by pepper spray with eyes and throat burning. An ambulance was almost called as the teenager could not stand up for a while, crying and disoriented. The man put under arrest was taken to the police station and released later in the evening.

We know there has been some community concern regarding the circumstances surrounding yesterday’s arrest.

Footage of the incident and the events leading up to the arrest is currently being reviewed at Chief Officer level.

Kemp’s comments do very little to inspire confidence in either the police or their review process. As SYMAAG’s statements show, protestors in Sheffield were met with heavy-handed policing. Concerningly, there’s also the implication of extremism or terrorism as a possible explanation for the police’s actions.

A 44-year-old man from Sheffield was arrested shortly before 2pm at the protest, on suspicion of displaying articles suggesting support for a proscribed organisation, which is an offence set out in the Terrorism Act 2000. He was then released under investigation.

It is commonplace for Kurdish people and their supporters to be immediately cast under suspicion. As The Canary’s Emily Apple reports from a trip to Bakur:

In every meeting we go to, in every interview we conduct, eventually we discuss what sentences people are facing or have already served.

Everyone is charged with “membership of a terrorist organisation”. But these are not terrorists. These are lawyers, journalists, MPs, co-op members, and human rights activists. Their crime is being Kurdish and supporting radical democracy in the face of president Recep Tayyip Erdoğan’s fascistic regime.

The actions of South Yorkshire Police are frighteningly similar to the broader repression faced by Kurdish people in Turkey. It’s going to take far more than a review to address these injustices.

South Yorkshire Police had not responded to a request for comment at the time of publication.