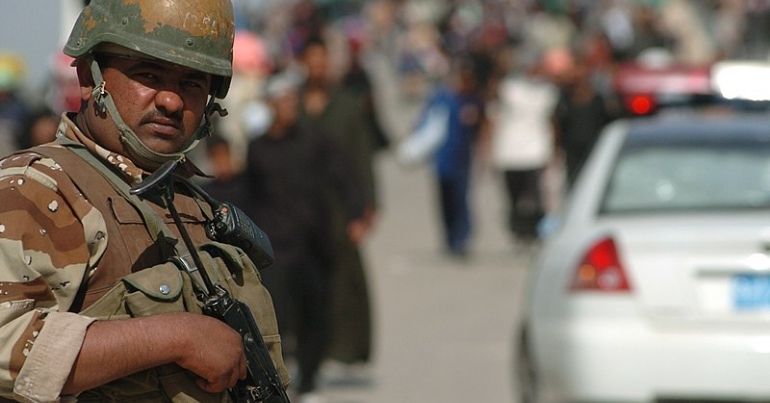 Two foreign journalists arrested by the Iraqi Army are now in police custody in Baghdad, according to reports. Named as Marlene F. and Matej K., the pair were detained by the army on Wednesday 20 April. The arrests took place near the Yazidi settlement of Şengal in northern Iraq.

But Kurdish news website ANF claims no reasons had been given for the arrests.

Marlene F. and Matej K. had been researching the Yazidi community. ANF reported Kurdish sources which said the arrests had taken place despite the pair declaring themselves as journalists:

By their own account, Marlene F. And Matej K. have been in Şengal for a few months for research into social settings in the Yazidi community in Şengal. According to Civaka Azad, they were conducting conversations with representatives of different civil organizations and regional institutions.

Reports say they were searched and threatened, and their phones and bags were seized. The arrests came during tensions between the Iraqi military and militia units, according to ANF:

At the beginning of the week, tensions between Yazidi defense forces and Iraqi troops had escalated. There were combats as a result of attacks on the positions of the YBŞ, the Yazidi women units YJŞ and Asayîşa Êzîdxanê.

Marlene F.’s parents signed an open letter to German foreign minister Annalena Baerbock calling for the reporters to be released. The letter said that freedom of the press was “not a luxury”.

Additionally, they said the journalists were interested in the the Yazidi people and want to:

contribute to the demand and the right of the Yazidi population to self-determination being heard worldwide.

The German embassy said it would update the family as specific details emerge.

Reporters Without Borders puts Iraq at 163rd place on their press freedom index. Kurdish journalists have warned about an assault on press freedom. Reporter Omed Baroshsky was released from jail in February. Imprisoned in 2020 over social media posts critical of the authorities, Baroshky served 18 months in prison. Press freedom in the region, he told the Committee to Protect Journalists, was an “illusion”.

As The Canary has reported, Yazidis suffered genocidal brutality under ISIS rule and now face repression from nearby Turkey.