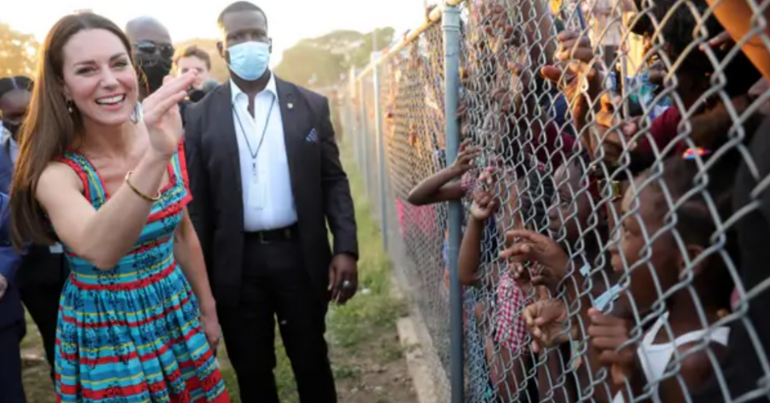 Royal tours to the Caribbean should be scrapped unless the royal family uses them to address “truth, reconciliation and justice”, a political activist has warned.

embarrassment to the British monarchy.

The overseas visits were met with controversy as campaigners demanded apologies from the royal family and reparation over slavery, while numerous nations set out their intentions to become republics.

If the purpose of the trip is what we’ve seen which is basically a continuation of representing the legacy of the British Empire, then absolutely yes these tours should just end.

Quite frankly these royal tours that we’ve seen to date are an embarrassment to the British monarchy.

However if the royal tour was one that speaks to what many of these Afro-Caribbean nations are seeking to address, which is truth, reconciliation and justice, then you need to get on board those tours and make them work.

During Edward and Sophie’s trip to Saint Lucia, Saint Vincent and the Grenadines, and Antigua and Barbuda, which came to a close on Thursday, the earl was criticised for his response after being pressed over reparations.

The Queen’s youngest son gave a nervous laugh when asked to make remarks after the Prime Minister of Antigua and Barbuda called on the Wessexes to use their “diplomatic influence” to achieve “reparatory justice”, and outlined the country’s wish to “one day become a republic”.

The earl joked that he had not been taking notes during Gaston Browne’s opening comments, so could not respond to all the points he had made.

He’s not taking notes? What the hell is he doing there? That was his response to very sensitive issues that pertain to people of that country.

She highlighted the two years since the global Black Lives Matter movement, saying:

What I can’t understand is how, in 2022, we still have a royal family that refuses to get with the programme, that is so behind the times. They are losing all relevance.

William and Kate were accused of harking back to colonial days in Jamaica in March after the pair shook hands with crowds behind a wire mesh fence and rode in the back of a Land Rover, just like the Queen did 60 years ago.

Demonstrators accused them of benefiting from the “blood, tears and sweat” of slaves, while in the Bahamas they were urged to acknowledge the British economy was “built on the backs” of past Bahamians and to pay reparations.

Jamaica’s prime minister Andrew Holness suggested to William and Kate that his country may be the next to become a republic, while a minister from Belize said afterwards that perhaps it was time to “take the next step in truly owning our independence”.

William acknowledged after the trip that the monarchy’s days in the Caribbean may be numbered as he stated the future “is for the people to decide upon”.

He stressed that he and Kate were “committed to service” and saw their role as supporting people, “not telling them what to do”.

The duke had expressed “profound sorrow” in a speech during his visit at the forced transportation of millions of people from Africa to the Caribbean and North America.

Future king Charles addressed the “appalling atrocity of slavery”, describing it as something “which forever stains our history” last November when he attended the ceremony marking Barbados’ transition to a republic.

But the royals’ rhetoric has been criticised as “phony sanctimony” by campaigners who asked for the “mantra” not to be repeated in an open letter from the Antigua and Barbuda Reparations Support Commission to Edward and Sophie.

‘Oh we acknowledge that slavery was abhorrent.’ Please kiss my royal chuddy. What nonsense.

I don’t need you to tell me that. I know that slavery was abhorrent. I want to know how and when you are going to take responsibility.

The British royal family was involved in the transportation and selling of people for profit for centuries with Elizabeth I becoming involved in the lucrative dealings of John Hawkins, one of Britain’s first slave traders in the 16th century.

When his first adventure proved successful and his ships returned laden with goods, she supported his future expeditions by providing vessels to carry the human cargo.

The connections between the royal family and slavery continued with Charles II, who encouraged the expansion of the slave trade.

He granted a charter to a group of men, the Royal Adventurers, who later became the Royal African Company – and the monarch invested his private funds in the venture.

The couple also received warm welcomes, with visits to a Sail-Ability programme in Antigua and Barbuda, Sophie taking questions on female empowerment at a secondary school in Saint Lucia, and Edward visiting Saint Vincent and the Grenadines’ national stadium to meet athletes training for the Commonwealth Games.

ill equipped to rise to the occasion.

The Caribbean visits showed the royals behaving as they always do, but the world has moved on in the wake of the Windrush scandal and Black Lives Matter.

Any future trips would be unwise, as the role of Britain and the monarchy in the slave trade would feature and the royals appear ill equipped to rise to the occasion.