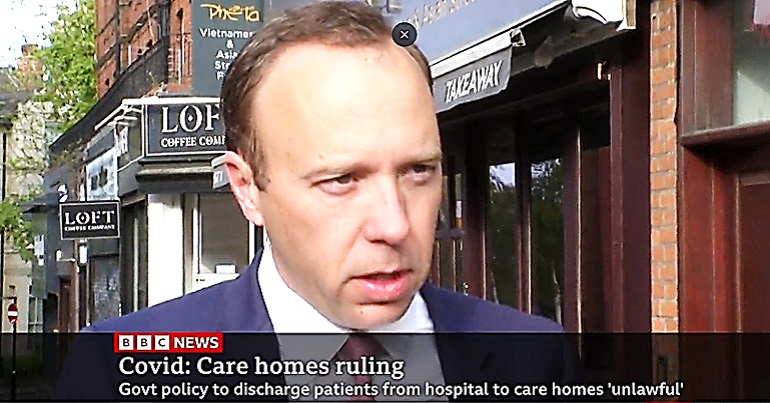 Former health secretary Matt Hancock just lied about the government’s knowledge of the asymptomatic transmission of coronavirus (COVID-19). It was in relation to 3 April 2020 – which up to this date a court has now ruled the government had acted unlawfully in allowing people back into care homes without coronavirus testing.

As Sky News reported, the government did not require care homes to test residents who were returning from a hospital until mid-April 2020. A court has now ruled that as unlawful. Sky News wrote that two judges said:

policies contained in documents released in March and early April 2020 were unlawful because they failed to take into account the risk to elderly and vulnerable residents from non-symptomatic transmission of the virus.

They said that, despite there being “growing awareness” of the risk of asymptomatic transmission during March 2020, there was no evidence that Matt Hancock, who was health secretary at the time, addressed the issue of the risk to care home residents of such transmission.

But if you’re Hancock, then he and the government knew nothing about asymptomatic transmission.

BBC News questioned the former health secretary about this. Hancock gave the usual vacuous token apology for the “pain and the anguish” he and the government caused families. He trotted out the usual ‘lessons learned’ BS the government is so fond of. But crucially, Hancock claimed that:

We ministers were not told about the asymptomatic transmission. This was a really important scientific fact.

This is a lie. Sky News said as much, as it reported that:

The evidence is clear: Hancock’s a liar

On Twitter, people were pointing to vast amounts of evidence. This showed that the government would have known about asymptomatic transmission before mid-April 2020. Dr Anthony Costello from Independent SAGE put out a huge thread. It contained large amounts of research prior to April 2020 on this:

The government claim that up to 3 April 2020 it was “unlikely” that there was pre-symptomatic and/or asymptomatic transmission of COVID-19. Let us consider the evidence. THREAD (1)

Fionna O’Leary screen-grabbed a portion of the parliamentary record from 16 March 2020. It shows that Hancock seemed to know about asymptomatic transmission:

Broadcaster Matthew Stadlen claimed SAGE knew of this on 28 January 2020.

So, either Hancock is a liar, he has a terrible memory, or – in light of scientific researchers producing documentary evidence of asymptomatic transmission in early 2020 – he thinks we’re all fools. It’s pretty clear which one it is.