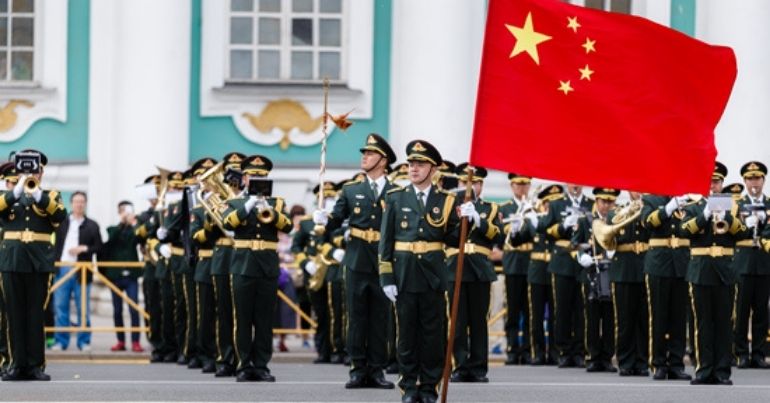 Britain has always hated bullies. China must do what Britain says. Russia squandered a chance to reform when the Soviet Union ended. Yes, Liz Truss has given another major foreign policy speech and it’s an absolute masterclass of the Liz Truss speech form.

Her address took place at the Lord Mayor’s 2022 Easter Banquet on 27 April. And not even the complexities of actual real-world history and politics were going to hold her back. We examine some of her major clangers here.

Truss’ schtick is a ‘free world’ composed of like-minded democratic nations. In one passage she describes a ‘network of liberty’. In this analysis, capitalism equals freedom. For example:

Free trade and free markets are the most powerful engine of human progress. We will always champion economic freedom.

Elsewhere Truss goes even further, equating capitalism with peace and security itself:

So let’s work together. Let’s forge deeper bonds. Let’s be better traders, investors, and partners than the aggressors.

There are any number of reasons this is wrong. For example, Truss herself is part of a government which is trying to privatise critical media, ban protest and extend authoritarian police powers and ship asylum seekers to a dictatorship.

It’s even less convincing in the context of the Russian invasion of Ukraine. Russia is, of course, itself a capitalist country – contrary to the fantasies of the New Cold Warriors like Truss.

Truss also takes aim at China. Membership of the global capitalist economy, she insists, must be earned. Beijing, Truss said, “has not condemned Russian aggression or its war crimes”:

But China is not impervious. By talking about the rise of China as inevitable we are doing China’s work for it. In fact, their rise isn’t inevitable. They will not continue to rise if they don’t play by the rules.

We represent half of the global economy. And we have choices. We have shown with Russia the kind of choices we’re prepared to make when international rules are violated. And we’ve shown that we’re prepared to prioritise security and respect for sovereignty over short-term economic gain. Not least because we know that the cost of not acting is higher.

The first, and most obvious, issue here is that the second largest economy on Earth may not actually care what Liz Truss thinks. More broadly, it is no simple matter to compel the Chinese state. Especially if you are the UK, whose economy is deeply intertwined with that of China.

In fact, Truss’s predecessor Dominic Raab pointed out only last year in a defence and security review:

It would not be feasible to go into some old, outdated, cold war with China

In this light, Truss’s comments look like fairly empty rhetoric.

But Truss made an even more outlandish claim in her speech in the section on Ukraine and Russia:

Britain has always stood up to bullies.

This definitely needs to be unpacked. The hard part is where to begin. The obvious choice is Britain’s now-departed global empire built on invasion, slavery, exploitation, famine, and violence. Sadly, we don’t have time to write an entire book, so let’s turn to recent recent events.

We could talk about Iraq, where the UK threw its lot in with an illegal US invasion. The results? A million deaths, according to some figures, as well as the rise of ISIS.

Or Afghanistan, one of the poorest countries in the world, where a resurgent Taliban recently ejected the US-led occupation. A country teetering on the edge of famine while our chief ally, the US, has doled out the country’s stolen wealth to the 9/11 families.

Or maybe Libya, where the UK took part in a war which saw the country disintegrate into chaos. Where rival fighters are still squaring off as they vie to fill the 11-year-old power vacuum.

Not exactly the conduct of a nation which opposes bullies on the international stage.

It’s hard to see what Truss is trying to achieve, given that many of her major arguments can be easily dismissed. Maybe she’s playing to the Tory base of people who believe they died in both world wars despite being born long after they’d ended. Or maybe this is just posturing to deflect from the Tories’ internal crises, such as Partygate.

Perhaps most terrifyingly of all, Truss might actually believe that the likes of Russia and China actually shape their policies based on what she has to say about global affairs.

We cannot know. But what we can say is that if a British government wants a more peaceful and secure world, where international laws are respected, it needs to look a lot closer to home than Beijing.