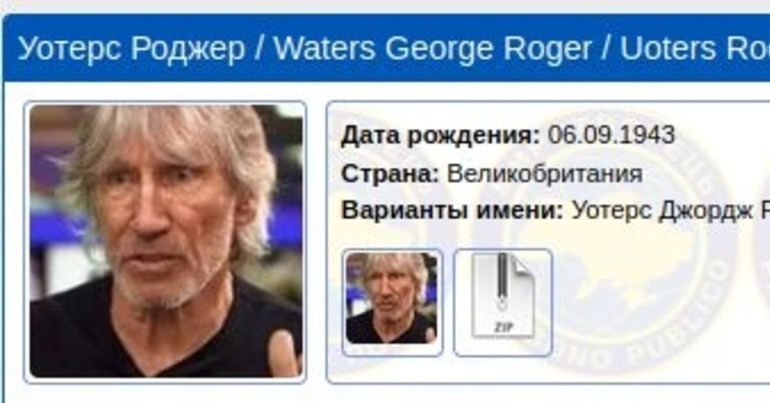 A Ukrainian blacklist claims to source some of its intelligence from Britain’s MI5. And it even includes a file on former Pink Floyd musician Roger Waters. The aims of the blacklist appear to be the suppression and elimination of voices critical of the Ukrainian government.

Meanwhile, there are those on the radical left – anarchists – who are fighting as partisans or alongside government forces, determined to crush the Russian invaders.

The Orwellian-sounding Peacemaker/Myrotvorets database is a blacklist reportedly organised in 2014. This was after a meeting between a former member of Ukraine’s security service Sluzhba Bespeky Ukrayiny (SBU) and Ukrainian politician George Tuka.

According to a 2019 Al Jazeera article, the database contained more than 130,000 persons, including Russian military and pro-Russia separatists. The Mirror believes the total number of names on the blacklist is now around 187,000. Names can be found with their sources quoted – e.g. MI5, NATO, SBU – at the bottom of each record.

Al Jazeera reported in 2019 that the database also included “4,000 international journalists accredited by separatist authorities”. And it currently includes a link to a list of more than 600 Russian FSB (successor to KGB) officers “involved in the criminal activities of the aggressor country in Europe”.

Peacemaker also includes a file on former Pink Floyd musician Roger Waters. An English translation of that file shows Waters is accused of:

Anti-Ukrainian propaganda. An attempt on the territorial integrity of Ukraine. Participation in attempts to legalize the annexation of Crimea by Russia.

It also includes a zip file with a list of websites that purport to back up these allegations. And the source of the Waters file is given as ‘SBU’.

Former Swiss strategic intelligence member Jacques Baud claims the Peacemaker database is used as a means of harassing or eliminating those in favour of a deal with Russia:

In the Ukraine, with the blessing of the Western countries, those who are in favor of a negotiation have been eliminated. This is the case of Denis Kireyev, one of the Ukrainian negotiators, assassinated on March 5 by the Ukrainian secret service (SBU) because he was too favorable to Russia and was considered a traitor. The same fate befell Dmitry Demyanenko, former deputy head of the SBU’s main directorate for Kiev and its region, who was assassinated on March 10 because he was too favorable to an agreement with Russia—he was shot by the Mirotvorets (“Peacemaker”) militia.

Clampdown on the left

Meanwhile, an article by Max Blumenthal and Esha Krishnaswamy in the Grayzone claims that Ukraine’s president Volodymyr Zelensky has “outlawed his opposition, ordered his rivals’ arrest, and presided over the disappearance and assassination of dissidents across the country”.

In a March 19 executive order, Zelensky invoked martial law to ban 11 opposition parties. The outlawed parties consisted of the entire left-wing, socialist or anti-NATO spectrum in Ukraine. They included the For Life Party, the Left Opposition, the Progressive Socialist Party of Ukraine, the Socialist Party of Ukraine, Union of Left Forces, Socialists, the Party of Shariy, Ours, State, Opposition Bloc and the Volodymyr Saldo Bloc.

One blogger referred to in the article provides a list of those who “fell foul of the Ukrainian government and its policies”. The article also includes numerous accounts of alleged torture carried out by Ukrainian military against Russians and pro-Russians.

There’s also another side to this conflict.

Le Monde Libertaire interviewed a member of the mainly Ukrainian anti-authoritarian Resistance Committee regarding what’s happening in Ukraine since the Russian invasion. The anonymous interviewee – we will call her ‘Yulia’ – explains that anarchists and anti-fascists have joined with units of the Territorial Defence Forces (TDF). And they are mostly active in the Kyiv region and Kharkiv.

While we had always opposed the Ukrainian state, we understand that Russian autocracy is much worse. If the Russian army occupied Ukraine, there would be absolutely no political freedom, activists would be imprisoned or killed.

As for Putin, she adds:

[He] himself had said many times before that his favourite philosopher was Ivan Ilyin – a far-right thinker exiled by the Bolsheviks, who later supported the Italian Fascists and German Nazis as they rose to power , who had also repeatedly spoken out against the Ukrainians as a threat to Russia. Not to mention Putin’s ties and financial support to various far-right parties and Western politicians – like Marine le Pen, Eric Zemmour in France, Victor Orban in Hungary,

Yulia also  provides an excellent insight into how anarchists and left libertarians are organising with government forces. She adds how the TDF have “defended some cities against Russian regular troops and became partisans”. However, ” in other cases they fight alongside the army”.

It’s all about survival:

While some might argue that anarchists should have no cooperation with the state military, for all Ukrainian anarchists it is clear that this is a battle for our survival. The Russian army has already committed numerous war crimes against Ukrainian civilians, including the indiscriminate destruction of cities, the bombing of hospitals, the execution of men of conscription age, as well as mass arrests of pro activists- Ukrainians in various cities under occupation. If Russia won, such crimes would continue throughout Ukraine. This is why all Ukrainian anarchists decided to resist Russian aggression – like those anarchists who joined the Free French Army to fight against German Nazism.

Daily reports on the fight by the libertarian left against the Russian aggressors are provided by Operation Solidarity and published by Le Monde Libertaire.

What is it good for?

War inevitably results in atrocities and war crimes. And in Ukraine, it’s important to question the ultimate aim and scope of the Peacemaker blacklist, particularly if Baud’s claim that Peacemaker’s militia carried out an assassination is correct.

War also sees the often inevitable crackdown on those critical of the government line. We see that in Russia, with the banning of independent news media and blocking of social media. But, as pointed out in the article by Blumenthal and Krishnaswamy, it appears to be happening in Ukraine too, with the clampdown on opposition. The authors also point out that the Ukrainian government has combined all TV news channels into a single channel, which can be a form of censorship.

In any war, independent journalism has an important role to play to report on all of these aspects. Even if, for some readers, that makes for uncomfortable reading.