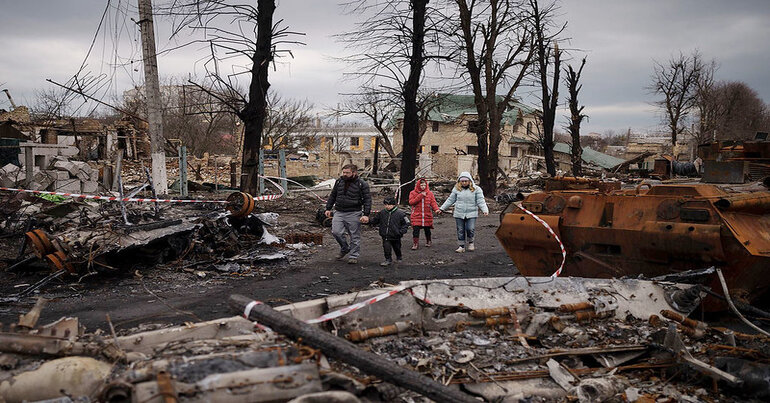 Warning: this article includes graphic descriptions and images of injury and death

Almost every day we see reports of horrific atrocities committed in Ukraine, with images of dead or mutilated bodies often sanitised by blurring. But as a Labour MP argues, the public should not be protected from seeing the true horrors of such atrocities.

This is not about sensationalising, but standing witness to what is happening because we owe it to the victims of those crimes.

The tragedies we are witnessing in Ukraine are devastating for the people there. Sadly they are not exceptional. The Canary has a long history of reporting on such war crimes – from Afghanistan, to Iraq, to Yemen, to Turkey, and beyond.

It’s essential the horror of all of these conflicts is told.

UK Labour MP Chris Bryant tweeted that media –  in this case BBC World – should not protect the public from seeing the truth about atrocities taking place in Ukraine:

I found @BBCWorld last night shockingly underpowered as if they felt we had to be protected from the Russian atrocities in #Bucha. The truth is shocking but hiding it lets Putin and the war criminals get away with it. pic.twitter.com/wAuJKgYyJT

Byline Times executive editor Peter Jukes argues that we owe it to the victims of war and their families to reveal the full truth of such crimes:

I know all of us want to look away. But we can’t, we mustn’t. We owe the hundreds, probably thousands, of innocent surrendered victims of Russian occupation to avenge their deaths and deter future atrocities https://t.co/Lgeb5AzJXE

Over many days tweets from independent sources provide unsanitised images of alleged war crimes, mostly discovered in Bucha. For example, one tweet claims to show more murdered civilians with their hands tied behind their backs. Another shows dead bodies of civilians left lying in the streets.

This is dead people in Bucha, killed by russian soldiers. It seems, it family. With children. Russians tried to burn bodies to hide their war crimes pic.twitter.com/VSRRupHECB

And this video shows the horrible scene that followed the bombing of the railway station at Kramatorsk, with at least 50 people dead:

As for the total devastation of Mariupol, this level of destruction is reminiscent of what happened in Grozny (Chechnya) and Aleppo (Syria).

There are also other reports about alleged atrocities committed in Bucha.

On 4 April it was claimed that the bodies of 410 civilians had been found in towns near Kyiv after the Russian military retreated. A mass grave was also discovered in Bucha. It was alleged that Russian soldiers had fired on men fleeing the town, and had killed civilians at will.

Regarding atrocities in Bucha and the other towns of Hostomel and Irpin, Ukraine’s ambassador to Australia Vasyl Myroshnychenko commented:

We see civilians’ dead bodies lying around the city, many of them have their hands tied up… Multiple rapes of women, children killed. This is a massacre.

Many other atrocities were reported by a number of papers, including the Daily Mirror.

Anatomy of murder captured by drone

Then there was the now infamous murder, captured by drone, of what appears to be a civilian who simply stepped out of his car, with hands raised, after being ordered to by the military.

The pictures from March 7 show Russian soldiers dragging the body of the man away from his car and into a ditch. A woman and a child were also travelling with him. They are later led by soldiers into the nearby forest. What happens to them then, the pictures do not show.

A BBC report takes up the story – and it is shocking:

Some answers already exist for a couple who were killed by the Russians and left to decompose on 7 March. Their rusty, shrapnel riddled car lies in the road next to one of the petrol stations, reduced to a shell by fire. Next to it are the burnt and twisted remains of a body that is just about recognisable as the remains of a man. A wedding ring is still on the corpse’s finger. Stretched out inside the hulk of their car is what is left of the incinerated body of a woman, the mouth opened in what looks like a scream. …

The bodies, the BBC discovered in an investigation this month, are of Maksim Iowenko and his wife Ksjena. They were part of a convoy of 10 civilian vehicles who were trying to escape the Russians and get to Kyiv.

Also in the car were their six-year-old son and the elderly mother of one of Maksim’s friends. Both of them survived and were eventually released by the Russian soldiers.

They were found walking back down the road, and the woman told her family that Maksim was shouting that a child was in the car when he was killed.

The elderly woman and the boy are now safe but traumatised.

The report added: “Under the laws of war civilians are protected, and when they are killed in defiance of those laws, their deaths amount to war crimes”.

But that was just one event, amongst hundreds of similar atrocities. It demonstrates all loss of morality.

From the beginning of this war there have been reports of countless numbers of civilians murdered and tortured. These and similar acts are war crimes, says Amnesty International. They may even be considered acts of genocide.

It’s now understood that as many as 20,000 civilians may have lost their lives in the city of Mariupol alone. And Iryna Venediktova, Ukraine’s prosecutor general, understands that more than 6,000 cases of war crimes have been opened for investigation.

But why are civilians dealt with in this way? The answer is that, as with most wars, the protagonists are made to see the enemy – military or civilian –  as less than human.

The following tweet includes an audio recording of what’s claimed to be Russian soldiers being ordered to kill in this way. The man giving the orders says “Here is a whole village of civilians. Shoot the civilian cars”:

“Kill them all!” – Russian occupiers get orders to kill civilians. New intercepts. pic.twitter.com/daGE4Hae9u

According to the Guardian, the recording was intercepted by Bundesnachrichtendienst (BND), Germany’s foreign intelligence service, in relation to the attacks in Bucha. If it proves to be authentic, it demonstrates not just the dehumanising of civilians but also the brutalisation of the combatants.

Human Rights Watch’s European media director posted a thread, commenting on some of the recent examples of atrocities:

In #Mariupol, #Ukraine, local authorities have said that Russia has forcibly evacuated 20,000-30,000 residents to non-government-controlled areas and to Russia.

If true, it could be another war crime: forcible transfers are prohibited under the “laws of war”.

Human Rights Watch has documented many alleged war crimes, in a number of locations in Ukraine.

The cases we documented amount to unspeakable, deliberate cruelty and violence against Ukrainian civilians. Rape, murder, and other violent acts against people in the Russian forces’ custody should be investigated as war crimes.

The laws of war prohibit willful killing, rape and other sexual violence, torture, and inhumane treatment of captured combatants and civilians in custody. Pillage and looting are also prohibited. Anyone who orders or deliberately commits such acts, or aids and abets them, is responsible for war crimes. Commanders of forces who knew or had reason to know about such crimes but did not attempt to stop them or punish those responsible are criminally liable for war crimes as a matter of command responsibility.

The accounts listed in the report, detailing horrific atrocities, will no doubt add to other evidence to be examined by the international courts.

Denials or in denial

And then there’s another narrative: the denial by Russia of any involvement in war crimes and atrocities:

This separate statement, issued by the Russian ministry of defence via its Telegram account, was in response to claims of war crimes committed in Bucha.

All this confirms conclusively that the photos and video footage from Bucha are another hoax, a staged production and provocation by the Kiev regime for the Western media, as was the case in Mariupol with the maternity hospital, as well as in other cities.

Moscow also has its many supporters and apologists. For example, there’s this article in the Orinoco Tribune. It in turn refers to another article, published on the ‘War On Fakes’ site.

And there’s this lengthy article by Jacques Baud, former member of Swiss strategic intelligence. He argues that Ukraine made serious errors in the years leading up to the war and it could have been averted.

Putting aside the geopolitics, what is undeniable in this conflict, as with many others, is the way civilians and their homes have been criminally targeted from day one. And it is these civilians, not governments, who ultimately deserve our support.

Moreover, journalists have an obligation to reveal, as far as they can, the truth about the horrors of war – for to do anything less would arguably equate to complicity. Indeed, over the years The Canary has not shirked from revealing the horrors of such crimes, sometimes publishing images and videos that bring home the full truth of what took place.

And the more the truth of war is revealed, the more likely the perpetrators of war crimes will be exposed and hopefully brought to justice.