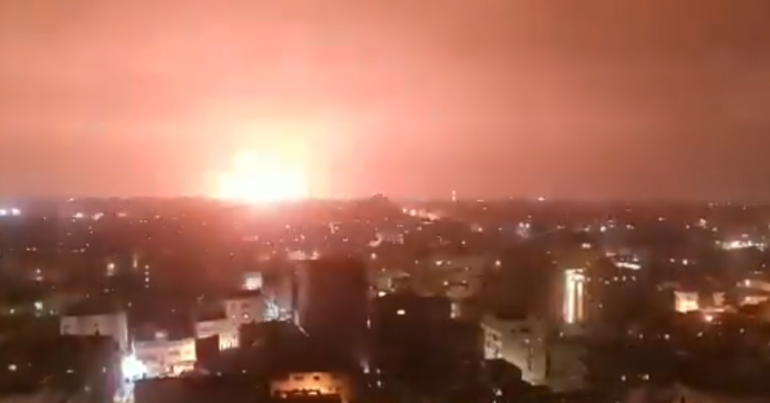 Since April 2, Israel has killed 19 Palestinians, and launched bomb strikes against the Gaza Strip. Israeli soldiers have also attacked crowds attending Jerusalem’s Al-Aqsa mosque during Ramadan. The escalating series of Israeli attacks is looking increasingly like a repeat of the events of last May, which ended in a full-scale Israeli assault on Gaza and an uprising across historic Palestine.

Because impunity kills, once again apartheid Israel has launched a campaign of escalating violence against Palestinians.

Gaza tonight, still not recovered from the unprecedented war crimes committed last May during Ramadan, is enduring a new deadly round of Israeli airstrikes tonight on Gaza to punish the Palestinian people for resisting collective punishment, occupation and apartheid. pic.twitter.com/56buaMRDzl

Sarah Wilkinson – a long term supporter of Palestine – tweeted a picture of one of the people killed, a young woman named Hanan Khadour, from the city of Jenin:

Shot by israeli troops as she was on her way home to #Jenin last week, 17yr-old Palestinian Hanan Khadour sadly loses her battle for life #RIP pic.twitter.com/1wyKkMrUmn

Our liberation struggle was and remains an integral part of the international struggle against the forces of colonialism, imperialism, Zionism and reaction. Accordingly, we salute all political prisoners in the world, the struggle of the Black liberation movement in America, the struggle of the Indigenous peoples for self-determination and liberation, and all liberation forces in the world, and we call for strengthening the relationship between these movements and all Palestinian communities in exile and diaspora.

We follow your efforts with pride, and we highly appreciate your support for the prisoners in the occupation prisons, especially the campaign of solidarity with the child prisoners, the administrative detainees and the campaigns of solidarity with sick and ill prisoners and hunger strikers, and with our valiant women prisoners in the prisons of the occupation. We value your principled position in supporting the struggle of the Palestinian prisoners’ movement for liberation, as it stands on the front lines confronting Zionist colonialism and its racist settler regime.

In response, a group of over a hundred Israelis declared that they will not cooperate with Israel’s apartheid court system. The move was specifically in solidarity with those held in detention without trial, also known as ‘adminstrative detention’.

107 Israeli citizens have signed our statement declaring they "will refuse to cooperate with the Israeli courts" if arrested for resisting apartheid, in solidarity with Palestinian administrative prisoners' strike. We demand an end to administrative detention! #FreeThemAll (1/8) pic.twitter.com/jIqejwoFqW

Neta Golan, one of the signatories of the statement, took part in a demonstration outside the HQ of Israel’s Shin Bet security agency on April 18. She and others pledged not to cooperate with Israeli courts or comply with conditions if they were arrested.

Jewish-Israeli activists block the road leading the Shin Bet's Tel Aviv HQ, during #EndAdministrativeDetention protest yesterday. Apartheid police attacked a Palestinian with Israeli citizenship who watched the protest, beating and arresting him. He was fined and released today. pic.twitter.com/41oyEF0iw2

The prisoners’ statement salutes the international boycott movement against the Israeli state:

Today, on the Day of the Palestinian Prisoner, we renew our call to the revolutionary and progressive forces supporting our people globally to deepen and expand the comprehensive international boycott movement against the occupation, its institutions and its corporate and institutional supporters. The accumulating achievements of the boycott movements, especially at the political, economic and academic levels, constitute a significant accomplishment for our Palestinian struggle and sacrifices and for the struggles of peoples and forces seeking national and social liberation and justice in Palestine and the world.

On this historic day, we call for the expansion of the popular and international campaigns that are being organized in Europe against the American and Zionist arms companies, such as Elbit, that manufacture death and supply the occupation with weapons and tools of killing, destruction and war. These companies are participating in the brutal aggression against our people, especially in the Gaza Strip, the largest prison in the world, and they are partners in war crimes and the policy of assassinations, premeditated killings and siege.

UK supporters of Palestine have been busy campaigning to force Elbit – which manufactures the drones used to attack Gaza – to pull their business out of the UK. In January, Elbit was forced to close down its Ferranti factory in Oldham due to a local militant grassroots campaign.

Since 2 April, campaigners have held a number of actions at Elbit’s premises:

Elbit make weapon components in the UK, that are used in the illegally occupied territories in #Palestine #IsraeliArtheid #ShutElbitDown

Palestinians are calling for international support and solidarity, and all of us who stand with the anti-colonial struggle against Israel’s occupation of Palestine need to heed that call. The escalation of Israel’s attacks on Palestinians over the last two and a half weeks should serve as a stark reminder of the stakes in this struggle.