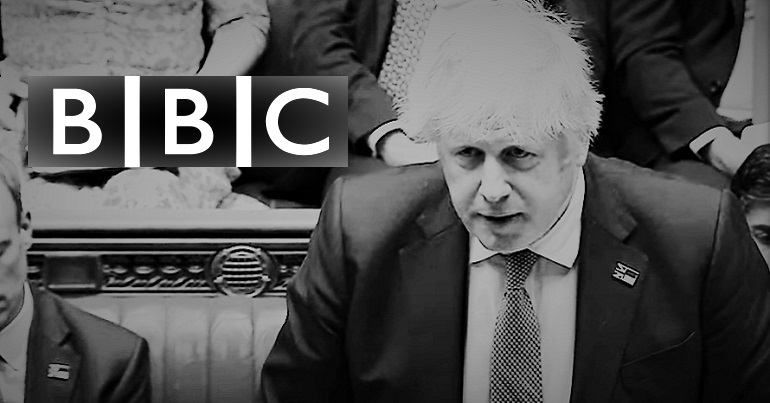 The BBC is under fire from Boris Johnson over its coverage of the government’s plan to send refugees to Rwanda. The PM accused the state broadcaster of being more critical of the scheme than it is of Vladimir Putin. In reality, the BBC hasn’t been critical enough. It’s just done what it always does: present the government line under the guise of impartiality. Not that that matters when we have a far-right government engaged in class war, whose goal is a corporate fascist state.

Johnson: the BBC is nicer about Putin

The Telegraph reported on comments Johnson made in a private meeting of backbench Tory MPs. He allegedly said that the BBC, as well as the Archbishop of Canterbury, were “less vociferous” about Putin than they were about the refugee plan. Johnson also said the BBC has “misconstrued” the government scheme.

In a later column, the Telegraph called Johnson’s comments a “war of words” between him and the BBC. Of course, the PM gunning for the Beeb is nothing new. As the Guardian reported, just days after the public elected him in December 2019, Johnson’s government was:

threatening the future of the BBC by insisting it is seriously considering decriminalising non-payment of the licence fee, while boycotting Radio 4’s Today programme over the broadcaster’s supposed anti-Tory bias.

This has been a running theme ever since. It has culminated in the government saying it plans to scrap the licence fee in 2027. Before then, it’s also freezing the price of the fee.

Of course, in the context of the BBC, Johnson attacking it is a typical Tory and centrist MO: label views you disagree with as somehow being aligned with the country’s perceived enemies. Much like the treatment of Jeremy Corbyn, you then have a public who distrust those who the perpetrator is smearing.  Moreover, as The Canary previously wrote:

The persecution complex is a right-winger’s bread and butter. Delusions of maltreatment contribute to a grand victim narrative: mundanities become sinister anti-Conservative plots, evidence of a society that is actively hostile to their beliefs, as opposed to one literally governed by the Conservative Party. The objective of this is to garner sympathy, to convince the wider electorate that if their views are controversial enough to be censored by influential, ‘woke’ progressives, then surely they must be worth listening to.

Johnson’s current “grand victim narrative” is a personal one due to Partygate. But still, it serves the same purpose as The Canary noted above. Never mind the fact that the BBC‘s coverage of the government’s Rwanda plan was fairly dire, anyway.

In a drive for ‘balance’, the BBC essentially kept the government’s line with a few opposing comments thrown in. For example, it published one of its earliest articles about the plan on 13 April.  Originally, its headline was:

However, as the BBC edited the article, the content became closer to the government’s populist line. For example, the BBC changed the headline to this on 14 April:

UK to give asylum seekers one-way ticket to Rwanda

Before altering it again to this almost right-wing, tabloid-style ‘shout’:

One-way ticket to Rwanda for some UK asylum seekers

The final headline absolved anyone of any responsibility for the deal; that is, it didn’t say who was giving refugees a “one-way ticket”. Even so, all the other headlines failed to say it was the government doing this. Instead, they pinned it on the more homogenous “UK”. Moreover, the article itself gave the majority of the commentary to the government. The Canary‘s analysis shows that the BBC gave around 216 words to opposition voices in the 1,062-word article. This was compared to 388 from either government or pro-government voices. That’s 79.6% more words for people in favour of the plan. Plus, the article gave most of it’s conclusion to pushing the government’s other plans for refugees.

Ultimately though, Johnson’s attack on the BBC, regardless of whether it’s warranted, is a further step down the UK’s path to corporate fascism. As The Canary wrote, in its broadest sense this is:

a form of [an] oppressive regime that removes civil liberties while handing corporations huge wealth from the public purse as well as giving them power and control over all of us.

Control of the media is one aspect of corporate fascism. Johnson’s continued attacks on the BBC coupled with his government’s privatisation of Channel Four, are the epitome of this. Both these actions are not needed: the BBC is heavily biased towards the government, and Channel Four is a profitable venture that doesn’t need to be privatised, as the public doesn’t actually fund it. The government’s destruction of both will cement the already-dire UK media landscape as one controlled entirely by corporations.

BBC: caught in the crossfire

When even corporate journalists like ITV political editor Robert Peston call the government an “elected dictatorship“, something is seriously broken. The BBC has never been an outlet working in the public interest. But Johnson and his government aren’t attacking it for that reason. Shoring up their own agenda is the priority – that is, the agenda of a far-right government, meting out a class war in a corporate fascist state. The BBC is just in the firing line.