Another Ramadan, another series of attacks on Palestinians at Al-Aqsa - The Canary 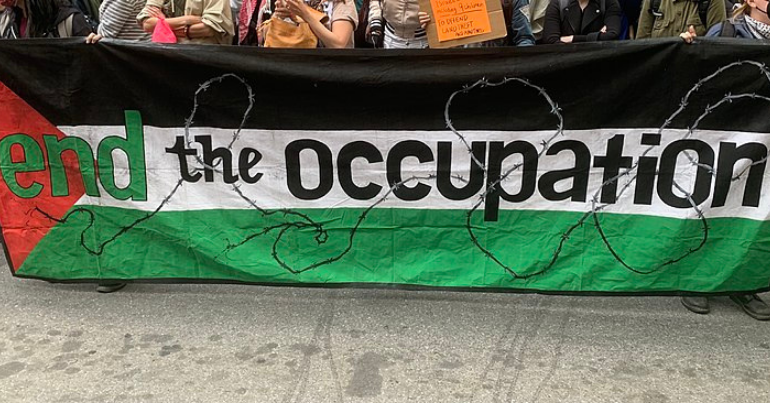 Al-Aqsa mosque in Jerusalem is under attack from Israeli forces during one of the holiest months in the Islamic calendar, Ramadan.

As The Canary’s Tom Anderson explains:

Since April 2, Israel has killed 19 Palestinians, and launched bomb strikes against the Gaza Strip. Israeli soldiers have also attacked crowds attending Jerusalem’s Al-Aqsa mosque during Ramadan. The escalating series of Israeli attacks is looking increasingly like a repeat of the events of last May, which ended in a full-scale Israeli assault on Gaza and an uprising across historic Palestine.

Al-Jazeera journalist Arwa Ibrahim shared footage of one of the attacks:

As Jewish Voice for Peace point out, it is important to acknowledge that Palestinians were gathered in worship when they were attacked:

Israeli forces have detained 500+ and injured 170+ Palestinians at Al Aqsa Mosque in Jerusalem since the beginning of Ramadan.

These Palestinians were simply congregating and praying at the mosque, which is one of the few remaining public spaces for Palestinians in Jerusalem. pic.twitter.com/RfoZ9dMbLH

Palestinians are under attack every month of the year, but it is a choice on the part of Israel to attack yearly during Ramadan.

As Labour MP Claudia Webbe highlights, Al-Aqsa is often under attack during Ramadan:

Israel’s deliberate targeting of Al Aqsa Mosque during Ramadan is a crime that requires international condemnation.

This is the 5th year running they’ve deliberate waged religious persecution against Muslim members of the Palestinian nation.

Middle East Monitor provide a timeline that tracks Israel’s attacks on the Al-Aqsa mosque that dates back to 1967. In 2015, it reports that:

On the first day of the holy month of Ramadan, settler gangs stormed Al-Aqsa Mosque from Al-Mughrabi Gate, protected by the security forces.

In 2019 there were multiple attacks throughout Ramadan, including when:

Israel places restrictions on Palestinian access to Al-Aqsa during Ramadan, with men aged 30-40 needing permits to do so, and those 16-29 ineligible to apply. There are no criteria for applying for permits, only conditions for consideration

Israeli occupation forces storm the house of Al-Aqsa Mosque preacher Sheikh Ekrima Sabri saying they will hold him accountable for any flare-ups at the Muslim holy site, after he warns settlers may be allowed to storm the site while it remains closed during the coronavirus pandemic

These attacks span throughout the months of the year, not only Ramadan.

AJ+ provide context for the Ramadan attacks, with details on how Israeli forces break into Al-Aqsa regularly:

Israelis have been breaking into Al-Aqsa mosque for decades — it happens almost on a daily basis. pic.twitter.com/pXkIDhQgXk

Many self-proclaimed internationalists won't even acknowledge the illegal occupation of Palestine. The inconsistenty in their approach to human rights is clear for all to see. Their empathy does not extend to the lives of Black and Brown people.https://t.co/EMVg4fgDLQ

Palestinians are under attack every day from Israeli occupation. They deserve the same empathy that we extend to others under occupation.