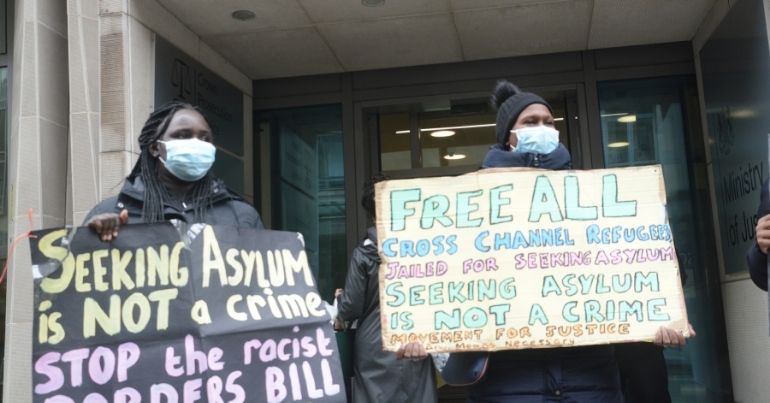 As reported by The Canary on 14 April, the government has announced plans to process and detain asylum seekers in Rwanda. In spite of questions surrounding the legality of the offshoring plan, prime minister Boris Johnson maintains that the government can implement it using existing legislation.

This comes as part of the Tories’ Nationality and Borders Bill which – if passed unamended – would empower the Home Office to revoke the British citizenship of anyone who can claim citizenship in another country.

In spite of widespread resistance to the inhumane plans, MPs voted against a House of Lords amendment that would force the government to pass any offshore detention plans through parliament at a House of Commons debate on 20 April. The bill will return to the House of Lords on 26 April.

Now is the time to resist this draconian anti-refugee bill.

“to conduct transparent, credible and independent investigations into allegations of human rights violations including deaths in custody and torture.

Stephanie Boyce, president of the Law Society of England and Wales, has questioned whether Patel’s offshore processing and detention plan complies with Britain’s human rights obligations under international law.

More than 160 charities and campaign groups have signed an open letter urging the government to u-turn on its “shamefully cruel” plan.

Meanwhile, the Guardian has reported that civil servants working in the Home Office may resist the unconscionable policy on ethical grounds.

In spite of opposition to the policy, on 20 April MPs voted 303:234 against a proposed amendment that would require MPs and Lords to approve any offshore processing and detention plans. This amendment included requirements for home secretary Priti Patel to present the details and costs of her offshore detention plans before she can enforce them.

Incredible scenes in the House of Commons tonight, as Conservative MPs voted against giving themselves the right to scrutinise asylum offshoring deals and see cost breakdowns before they are struck

The govt won all votes against Lords amendmentshttps://t.co/dmQueRAI6J

The anti-refugee bill will return to the House of Lords on 26 April for the last time before it passes.

We must resist the government’s cruel and inhumane plan to send vulnerable asylum seekers to Rwanda, a much smaller and more densely populated country than the UK. This begins by putting pressure on those in power.

Refugee rights group Safe Passage has drafted a template letter for people to put pressure on their MPs to oppose the anti-refugee bill. Ahead of the House of Commons debate, the group shared:

Today we sent a clear message to MPs before they vote today on the cruel Nationality and Borders Bill. Have you sent a letter to your MP demanding they stop plans to exile refugees to Rwanda? 👉🔗 https://t.co/PMFZnKCs0U pic.twitter.com/rQUwZNOY5u

Alongside this, human rights organisation Detention Action shared a link to their petition against the draconian legislation:

Support groups working on the ground

Grassroots groups continue to do fantastic work supporting refugees and asylum seekers, and organising against the government’s anti-refugee legislation.

Detention Action directly supports those in detention, while also campaigning for policy and legislative change:

The Anti-Refugee Bill is back in front of MPs TODAY. If you are against it, please urgently write to your MP and ask them to stand against Rwanda plans: https://t.co/ZhIqObWXcK pic.twitter.com/vaGmwAu9CB

Freedom From Torture provides therapy and support for torture and trafficking survivors in the UK:

We have conversations like this with the people we help all the time.

We know times are tough for all of us but even the price of a cup of coffee can be the difference between someone eating or going hungry tonight.

And SOAS Detainee Support is a grassroots abolitionist group working in solidarity with detained people in the UK to resist imprisonment and deportation:

Today we gathered outside the Home Office to say NO to offshoring – Abolish all detention! ✊ pic.twitter.com/iE7IzjkKDY

Supporters can donate to sustain their frontline work via PayPal.

A good time to donate what you can to #Brighton charities supporting refugees, like @hummingbirdbtn: https://t.co/ls9mpQddRx

Take to the streets

Highlighting the vital role of protest in undermining such legislation, policy and advocacy manager for the Joint Council for the Welfare of Immigrants Zoe Gardner shared:

Remember: Israel had an agreement like this with Rwanda. They managed to get it stopped.

Never think that just happened without activism and protest. Ordinary people stopped that policy being viable, and so can we! #r4today

Protests against government plans to send asylum seekers to Rwanda are due to take place on Saturday 23 April.

Londoners can join Stand Up To Racism in Croydon:

According to the Bristol Defend Asylum Seekers Campaign, Bristolians are coming together at midday:

People can keep an eye on Collective Action London‘s page for the latest updates on upcoming protests in other locations this weekend.

Now is the time to resist Britain’s outsourcing of border control, and to demand an end to its anti-refugee policies altogether. We must use our collective power to demand that our government treats refugees and asylum seekers with the dignity and respect that every human being is entitled to.

Featured image via Philip Robins/Unsplash – resized to 770×403, via Unsplash License