While we were distracted by No 10's Christmas party, the government rubber-stamped its racist immigration bill - The Canary 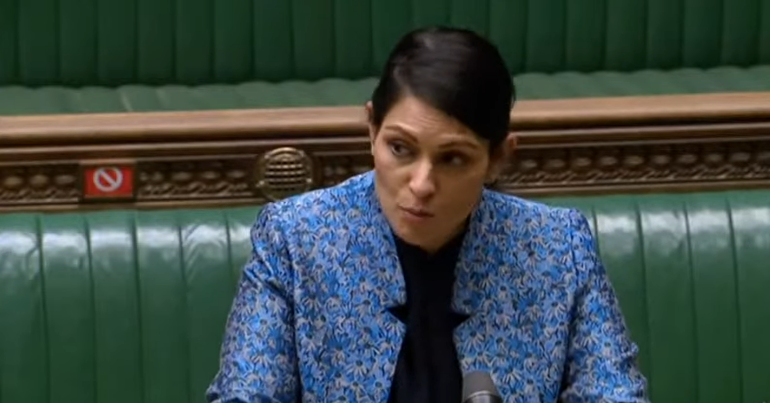 While UK headlines were concerned with prime minister Boris Johnson’s 2020 Christmas party, home secretary Priti Patel’s controversial nationality and borders bill passed its third reading in the House of Commons on 8 December. International and human rights lawyers have called the legality of the draconian legislation into question. MPs and campaigners took to Twitter to speak out against the bill, labelling it racist and inhumane.

A Tory majority in parliament

I just voted on Priti Patel's Nationality and Borders Bill.

It's an attack on refugee rights, criminalising boats rescuing people at sea and violating our 70-year commitment to the Refugee Convention.

I voted against it, but disgracefully Conservative MPs voted it through.

Indeed, 298 MPs voted in support of the controversial bill, while only 231 voted against it. This gave the government a 67 vote majority. Sharing the devastating news, Poplar and Limehouse MP Apsana Begum – who had tabled an amendment to the draconian bill – said:

Sending solidarity to those impacted by the bill, writer Ilyas Nagdee shared:

Solidarity to all those feeling disheartened, distraught and demoralised today.

When the tides shift, and they will, I hope these people never know a days peace. https://t.co/RHaey6fdBs

The bill will allow the home secretary to remove a person’s citizenship without warning. Analysis by the New Statesman found that under the new legislation, two in five racially minoritised Britons could become eligible to be deprived of their citizen status without warning. This is compared to just one in 20 people from a white background. According to Institute of Race Relations vice-chair Francis Weber:

@pritipatel's Nationality and Borders bill will allow the home secretary to strip a person of their citizenship without informing them. Almost half of ethnic minorities would be impacted by this, with 6 million falling under new powers

Lamenting the limited coverage of the legislation which could impact the lives of countless racially minoritised Britons, Mish Rahman tweeted:

While ppl are focused on the video of the govt laughing at us a year ago and a Downing Street Party –
the government, with the minimum of media coverage are getting the Nationality & Borders bill passed which will allow them to strip ppl like me of my citizenship without notice

The bill will also empower the home secretary to remove the citizenship of anyone who also has citizenship in another country. This has the potential to continue rendering them stateless. Highlighting the unprecedented case of Shamima Begum, journalist Ash Sarkar said:

People scoffed when we said stripping Shamima Begum of her citizenship created a dangerous precedent, and now look: the Nationality and Borders Bill passed last night creates second-class citizens out of millions of Britain’s dual nationals.

Ahead of the Commons vote, a Lords committee questioned the legality of the home secretary’s bill. Peers raised particular concerns about Patel’s plan to make border force officials push boats crossing the Channel back into French waters. The inhumane bill will grant immunity to border force staff if people die in these dangerous operations, while criminalising anyone trying to help drowning refugees and asylum seekers.

Whilst most attention has been paid to Allegra Stratton and the Number 10 Christmas parties, the Nationality and Borders Bill has passed. The legislation allows for the Government to remove citizenship without warning, to turn back asylum seekers and criminalise their passage.

The United Nations Refugee Agency warns that the bill “would penalise most refugees seeking asylum in the country”. And said it could create a model that “undermines established international refugee protection rules and practices”. Due to its multiple breaches of international and human rights law, Patel’s bill will likely come up against further legal challenges.

Take a stand against the bill

Calling on opponents of the overtly racist bill to “resist by any means necessary“, campaign group Movement for Justice shared:

It IS happening, it HAS happened- now only question is what WE do to prevent devastating impact & loss of life not at some long distant point when a judge ‘might’ step in; but right NOW in our workplaces, schools, neighbourhoods – this bill must b made unworkable #StopNABB (4/4)

The violence of borders x the carceral system has long been a tool of the British imperialist project. The #BordersBill is an embodiment of that. We cannot fight for dismantling borders & saying #StopNABB without also resisting prisons, the criminal ‘justice’ system + police https://t.co/saqB5rqRCr

Additionally, media campaign group, Media Diversified is pushing for people to mobilise against the bill and sign the its petition:

This petition only needs 73k more signatures before the government has to defend in parliament why black and brown lives matter less than white in this country. Please sign and share to oppose clause 9 of the #NationalityandBordersBill #BordersBill https://t.co/jQBaCnmam2 pic.twitter.com/CuYFZVa5Wc

Indeed, from the racist immigration bill to the anti-protest policing bill, the Tories are trying to push through the most oppressive legislation we have seen in recent history. We must unite to fight the government’s populist, authoritarian, ultra-nationalistic agenda before it’s too late.