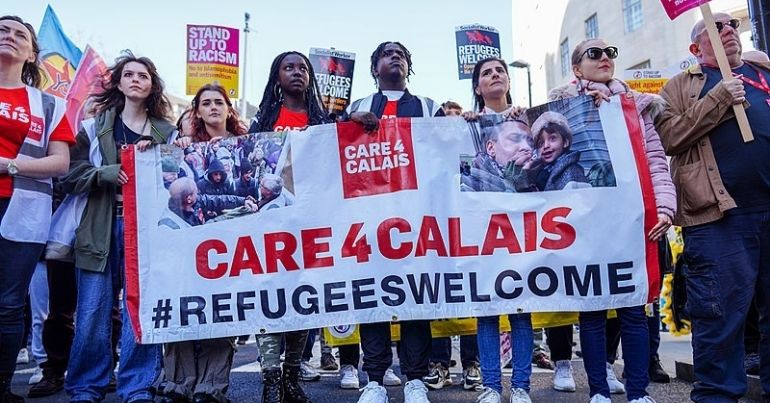 Refugees crossing the channel will be sent to Rwanda and held there while they are processed. The plan, due to be announced Thursday, is the latest cruel twist to emerge from the Tory’s racist Nationality and Borders Bill. Home secretary Priti Patel took to Twitter Wednesday 13 April to promote her vision:

🇬🇧🇷🇼 In Kigali, Rwanda, ahead of a significant moment for the New Plan for Immigration.

Full details are due to be announced today. However, the BBC reported that an initial £120m deal had been struck with the Rwandan government.

The BBC said that the scheme would mostly see Rwanda:

“take responsibility for the people who make the more than 4,000 mile journey, put them through an asylum process, and at the end of that process, if they are successful, they will have long-term accommodation in Rwanda.

The BBC has seen accommodation the asylum seekers will be housed in, thought to have enough space for around 100 people at a time and to process up to 500 a year. Nearly 29,000 migrants crossed the Channel in 2021.

Shipping asylum seekers 5000 miles to Rwanda for “processing” is both cruel and bizarre. And at a cost of up to £100,000 per asylum seeker, it is a ridiculously expensive way to pander to racists. pic.twitter.com/3Vk5f1maye

Meanwhile, one law professor warned the plans were the “stuff of nightmares”:

And if an asylum applicant who’s been dumped in Rwanda is then refused, what happens then? The whole thing is the stuff of nightmares. It feels like things are becoming increasingly dystopian as the days pass. Why oh why can’t we have some creative and humane people in charge.

Another Twitter user pointed out that, only last year, the UK criticized Rwanda’s human rights record:

The #antirefugeebill & everyone who supports it deserve nothing but contempt

While someone else dug up the UK’s comments to the UN on the matter, which detailed concerns about deaths in custody, torture and human trafficking:

This is what UKGov said to the UN Human Rights Council about Rwanda just 9 months ago.
It “regretted” lack of investigations into human rights violations. And highlighted lack of support for trafficking victims, including in government centres.
👉https://t.co/c0G4kb9pKp pic.twitter.com/vK1JXQzKzN

Some think that even for this government, the plan might be a new low:

Papers have been briefed that Govt will announce tomorrow that asylum seekers will be flown to centres in Rwanda for the claims to be assessed. Sending people fleeing from persecution to a dictatorship that repeatedly violates human rights might just be a new low.

However, context is also vital. One social media user pointed out that the ongoing row about Boris Johnson’s fine for breaking lockdown rules was probably a factor:

The Rwanda story is a dead cat to deflect from Johnson's lies and criminality.

As part of their "culture war" tactics they want to create a media maelstrom by firing up Johnson's racist base and outraging decent people.

Don't let them get a way with it #ToryScumOut pic.twitter.com/gY5rpYbXF8

The fact that parliament is in recess while Johnson’s alleged criminality is making headlines may also have informed this timing of the asylum plan announcement:

Parliament is in recess & Johnson's criminality is making headlines. So cruel UK Home Secretary announces that
asylum seekers will be sent to Rwanda to have their applications processed.
No humanity in this govt.
Which Tory crony has got the contract?https://t.co/mgZpc7ESSV

The BBC reported that Johnson plans to argue that the move is needed to stop “vile people smugglers” turning the channel into a “watery graveyard” and that while “our compassion may be infinite” our “capacity to help people is not.”

But Johnson’s rhetoric certainly hasn’t convinced many. In fact, a demonstration was immediately called to take place on Thursday 14 April from 6pm outside the Home Office:

🚨🚨🚨 The government is announcing that they will be sending asylum seekers trying to reach the UK to Rwanda.

You read this right. Offshoring. It's official.

We must stand against this unspeakable cruelty. Join the demo: Tomorrow (Thursday). 6pm. Home Office.

The Tories have many motivations, none of them moral. But whatever is driving it, it is clear that Priti Patel plans to have some of world’s most vulnerable people locked up in camps in a human-rights-abusing regime. And we have to resist that every step of the way.