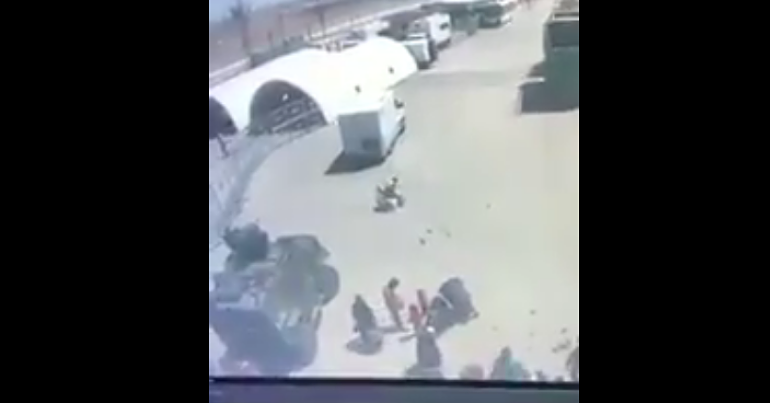 WARNING: This article contains very disturbing scenes which may not be suitable for everyone and are not recommended for the faint-hearted. The purpose of sharing these videos is not to shock our readers or encourage violence, but simply to reveal the alleged fate of innocent civilians at the hands of the Turkish military.

Not one but two shocking videos have emerged of what could be described as alleged war crimes by Turkey – a NATO member armed by the UK.

The following video appears to show a Syrian man in a wheelchair attempting to board a bus near the Syrian-Turkish border. But the bus suddenly reverses to allow an armoured vehicle – allegedly belonging to the Turkish military – to pass by. This vehicle then knocks the man down and drives over him, before shocked bystanders rush to his aid.

Turkish soldiers cruising a Syrian man in a wheelchair with and armored vehicle in Turkish Syrian border#NATO pic.twitter.com/DecHHwi1eW

The same Twitter account had previously posted the following footage from Turkey. In this incident, an elderly lady is crossing the road, when what appears to be an armoured vehicle of the Turkish military moves forward to crush her.

The Canary asked the Turkish embassy in London about the allegation of Turkish responsibility for the incidents filmed above. We had received no response by the time of publication.

Although we could not verify the exact sources of these videos, they come as no surprise. Because the current Turkish government has been accused of committing numerous human rights abuses. And in May, the Permanent Peoples’ Tribunal (PPT) found Turkey guilty of committing war crimes. The tribunal heard graphic eyewitness accounts of the Turkish regime’s treatment of Kurdish communities in south-eastern Turkey.

In February, meanwhile, The Canary reported on allegations that Turkish-backed jihadists in northern Syria had mutilated [graphic images] at least one female fighter who was defending her community.

Earlier this year, Turkey invaded the largely Kurdish province of Afrin in northern Syria. The Syrian Democratic Forces (SDF), which have received strategic military support from the UK and the US in the war against Daesh (Isis/Isil), issued a statement condemning the civilian deaths that followed.

Meanwhile, the Democratic Union Party (PYD) (which is the most prominent political party in Afrin) shared images of an alleged massacre by Turkish-led forces against a civilian family in the province. And veteran journalist and Middle East expert Robert Fisk confirmed the toll that the Turkish-led invasion was having on the local civilian population. Human rights monitor Turkey Untold also documented this situation:

The system Turkey is attacking…

The feminist Kurdish-led forces (YPG and YPJ) in northern Syria, which make up most of the SDF, have reportedly been some of the most effective ground forces in the fight against Daesh in recent years. The YPG/YPJ have been defending a secular, multi-ethnic, and feminist experiment in direct democracy since 2012 in the Democratic Federation of Northern Syria (aka Rojava).

At the forefront of this social revolution is the Democratic Society Movement (TEV-DEM). Its ideology is ‘democratic confederalism‘ (or grassroots, self-governing democracy).

There has been little to no political commitment to this system from Western governments. But the UK and the US have essentially been relying on the YPG/YPJ in the fight against Daesh, giving them strategic military support since late 2014.

The UK has sold $1bn worth of arms to Turkey since a failed coup in July 2016. In May 2017, Theresa May and BAE Systems sealed a £100m contract to help Turkey develop fighter jets. Rolls Royce also helps build [paywall] the engines for Turkey’s fighter jets.

This is all in spite of Turkey facing accusations of:

And with the recent re-election of President Recep Tayyip Erdoğan, the oppression and murder of Kurdish people, whether in Rojava or Turkey, will likely continue. To prevent this, we must all put pressure on our politicians to stop arming Erdoğan and his cronies.

– Write to Theresa May and your MP. Ask them to urge Turkey to resume peace talks with its opponents, and to release all political prisoners. Until that happens, ask them to cancel and stop approving arms sales to Turkey; and support Campaign Against Arms Trade to help make that happen.

– Read more Canary articles on Turkey, Syria, and Rojava/the Democratic Federation of Northern Syria (DFNS). And see more international reporting from us at The Canary Global.