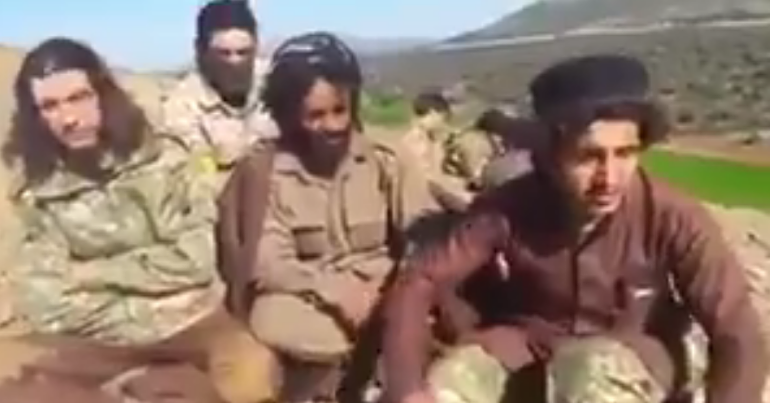 WARNING: This article contains very disturbing images which may not be suitable for everyone and are not recommended for the faint-hearted.

A photo of alleged jihadists reportedly deployed by Turkey to attack people in the mainly Kurdish-populated province of Afrin (northern Syria) has been published on social media. Meanwhile, the independent Syrian Observatory for Human Rights (SOHR) has shared video footage of these forces with the mutilated body of a female fighter who was resisting the invasion. It has also reportedly witnessed members of the fascist Grey Wolves group fighting alongside the Turkish invasion force.

Turkey’s alliance of jihadists and fascists

What a video this….Turkish backed Syrian rebels outside #Afrin, singing a jihadi song about "how we were steadfast in Grozny & Dagestan. And we took Tora Bora. And now Afrin is calling for us." pic.twitter.com/gmFb1gKvFO

The SOHR reports that it has witnessed members of the ultra-nationalist Grey Wolves fighting alongside the Turkish military. It also claims that about 280 citizens and fighters have been killed in Afrin province since the invasion by Turkey began on 19 January.

The SOHR has also reported on the mutilation of the body of a member of the mostly Kurdish YPJ (Women’s Protecion Units):

The Syrian Observatory for Human Rights received a copy of a video [which] showed a body of a female fighter of the YPG [sic] in Afrin area, after the Turkish forces and the rebel and Islamic factions operating in Operation “Olive Branch” managed to draw off the body, which sources confirmed to the SOHR that she was killed during the clashes witnessed in areas of the countryside of Afrin area, and the body was shown lying in the middle of a group of fighters and the upper part of the body was undressed after the body had been mutilated and parts of it had been cut off…

WARNING: below is a very graphic video of the mutilated body reported by SOHR:

The YPJ has mobilised to defend Afrin against the Turkish invasion. The Canary previously reported on how most of the casualities resulting from the Turkish offensive have been civilians, including children. This was confirmed by veteran journalist and Middle East expert Robert Fisk.

The YPG (People’s Protection Units) and the YPJ have been defending a secular, multi-ethnic, and feminist experiment in direct democracy since 2012 in Rojava (the largely Kurdish region of northern Syria).

Now, Turkey’s alleged cooperation with jihadists and fascists threatens a bloodbath in that same region.

Pleas for international intervention have already been issued by numerous organisations from around the world. But words are not enough.

– Write to Theresa May and your MP. Ask them to urge Turkey to stop its attack on Afrin immediately; and to resume peace talks with its internal opponents.