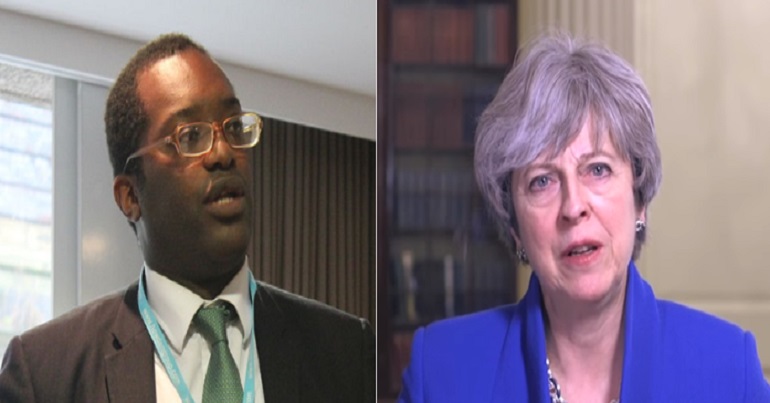 With Brexit dominating the headlines on Monday 5 February, the Conservative Party sent MP for Spelthorne Kwasi Kwarteng to be interviewed on BBC Radio 4 Today. But instead of a competent performance, Kwarteng managed to invent the content of a speech by Theresa May…

The Customs Union – in or out?

The Customs Union is an EU agreement on trading and the costs involved with this. And on Sunday 4 February, an “official” government source told The Guardian:

So Kwarteng, Chancellor Philip Hammond’s Parliamentary Private Secretary, was discussing it with host Sarah Montague on Today. He said [0:28]:

If you were to look at the Lancaster House speech last year, in January, it was very clearly set out that we would leave the Single Market… And also it was pretty clear we’d leave the Customs Union.

Unfortunately for Kwarteng, this is not what May said at all…

I know my emphasis on striking trade agreements with countries outside Europe has led to questions about whether Britain seeks to remain a member of the EU’s Customs Union. And it is true that full Customs Union membership prevents us from negotiating our own comprehensive trade deals.

I do not want Britain to be part of the Common Commercial Policy and I do not want us to be bound by the Common External Tariff. These are the elements of the Customs Union that prevent us from striking our own comprehensive trade agreements with other countries. But I do want us to have a customs agreement with the EU.

Whether that means we must reach a completely new customs agreement, become an associate member of the Customs Union in some way, or remain a signatory to some elements of it, I hold no preconceived position. I have an open mind on how we do it. It is not the means that matter, but the ends.

Home Secretary Amber Rudd told BBC‘s The Andrew Marr Show that the PM has “an open mind” on the Customs Union. But then Housing Minister Dominic Raab told Sky News that:

I do not think that we will be in any form, at least as conceived in international trade practice, of customs union…

And this came after Sky News reported that May and Trade Secretary Liam Fox were sending out “mixed messages” over the Customs Union, with the PM not “ruling out” a deal, while Fox was implying the opposite.

Thank goodness that’s all cleared up, then…