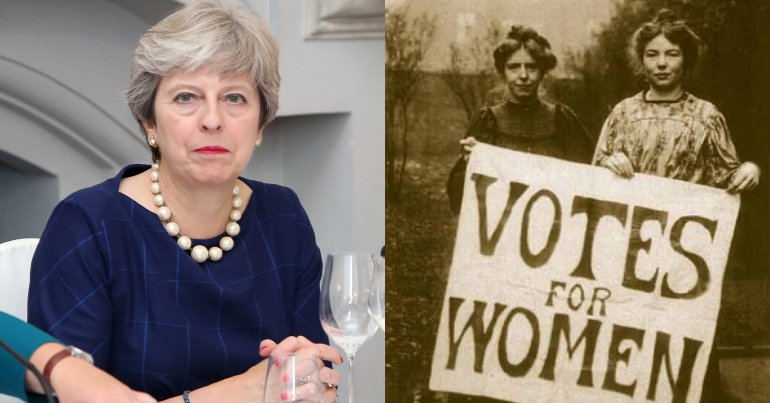 Theresa May is planning on introducing a law to celebrate 100 years since women got the vote. But the law she is proposing is an insult to the memory of the suffragettes. And had it been law during their time, it could have seen them locked up for up to 12 months.

One rule for politicians…

On Tuesday 6 February, May will give a speech marking the centenary. In it, she will reportedly propose legislation creating a new offence of “intimidation in public life”.

Proper intimidation and abuse should, obviously, be condemned. And there is, unfortunately, far too much of it, especially online. But abuse is not limited to those in public life, and it is unclear why there should be one law for politicians and one for the rest of us.

Online abuse has made me suicidal more than once. I have taken the pills. I have stood on the train bridge. I have been driven insane. I have had periods where I have been unable to work because I am such a wreck from sustained hatred and vitriol. I have lost work. I have been literally driven insane by hatred from strangers. It interrupts, it diverts, it permeates, it seeps in, you bullying bastards. It’s there when you’re reading bedtime stories to your kids. It strangles you in your sleep. It follows you in your hand, in your head. It slowly destroys you from the inside, a rot starts to set in. You become scared to say anything, scared to be anyone. You hide. You cry.

But this new offence wouldn’t apply to Monroe’s situation.

And one of the major problems of this new legislation is what the threshold of “intimidation” will be. Will heckling be included? Does one swear word count as intimidation? Will it simply be disruption and shouting?

And it doesn’t take much to see how easily this law might be used to crush protest. It only takes a quick look to see how existing law is being used. Take, for example, the disabled man who is currently being prosecuted for threatening behaviour for allegedly calling a Conservative MP a “fucking little Nazi”.

Or look at the case of Bethan Tichborne. Tichborne was convicted for using threatening words and behaviour, for telling David Cameron he had “blood on his hands”.

And with this new law, protesters could face 12 months in jail.

These cases also show that there is a wealth of existing legislation that is used regularly against protesters; whether it is the Public Order Act or the Malicious Communications Act that is frequently used against those who perpetuate online abuse. The suffragettes even heralded their own legislation – the Public Meeting Act 1908 – which was introduced because they disrupted so many political meetings.

Protest is not about being polite and asking nicely. If the suffragettes had just asked nicely, women might still not have the vote today. Protest should be about creating change, making people notice, and about causing disruption. We have a Conservative government, clinging onto power with a DUP alliance that was not voted for by the electorate. And we have a government that is killing people through austerity, destroying our NHS, and committing human rights violations against disabled people. We cannot afford to wait until 2022 to put another tick in a box. We need to be agitating for change; and doing it now.

This proposed legislation appears to be more about shutting down protest than protecting people from genuine intimidation. Suffragettes would be spinning in their graves at the thought of May introducing this law in their names.