You probably missed Vivienne Westwood's epic rant at the NHS march. So here it is. [VIDEO] - The Canary 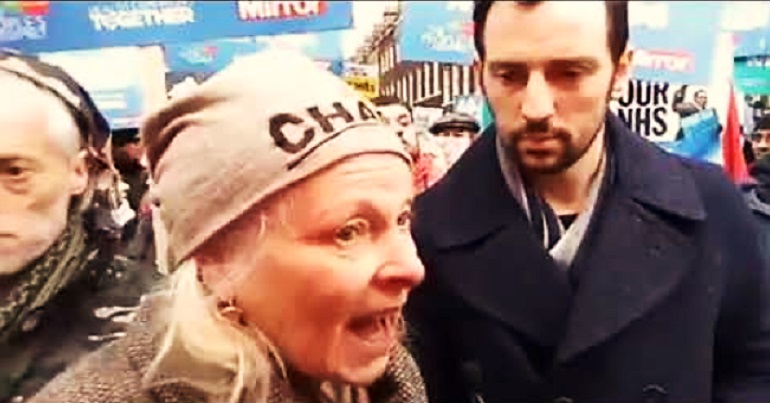 On Saturday 3 February, thousands of people lined London’s streets to join the People’s Assembly’s ‘Fund Our NHS’ march. Amidst the crowds, the appearance of fashion designer and environmental campaigner Vivienne Westwood went largely unnoticed. But her rant is worth watching, as it was somewhat epic.

The People’s Assembly told The Canary it estimated around 100,000 people marched to Downing Street in protest over the Conservative government’s handling of the NHS. But the group’s Facebook livestream caught up with Westwood, holding the banner at the front of the march next to actor and Jeremy Hunt-slayer Ralf Little.

Westwood said she “didn’t quite know” who Health Secretary Jeremy Hunt was. But she didn’t mince her words about the NHS and Labour leader Jeremy Corbyn, saying:

We’ve got an opposition… there isn’t one in the rest of the ‘important’ countries in the world… And he’s got to get his act together. He’s got to be the strongest opposition. Opposition’s more important than the government…

She was also clear on what Corbyn needs to say about the NHS:

He’s got to say… which he is saying… stop selling the NHS… stop privatising the NHS, because when we get in we’ll take it all back without compensation. He’s got to say that now.

But Westwood must have missed Corbyn’s prerecorded message to the NHS march. Because in it, he said:

When we are in government we will end the Tories’ privatisation, which siphons off money into the pockets of shareholders. And we will give the NHS and its amazing staff the resources they need.

Stars in their eyes

Little said he was “star struck” standing next to Westwood, but he wasn’t the only one. Because The Canary‘s Health Editor John Ranson bumped into Little before the march. The actor has been embroiled in an ongoing public row with Hunt over NHS funding; challenging the Health Secretary to a debate at the NHS demo. But Hunt was too busy “napping at an exclusive spa” to meet Little and join the march, according to The Mirror.

Little told Ranson how the debate with the Health Secretary had snowballed after he “just fired off a tweet”. He also said how pleased he was that it had amplified the discussion around NHS funding.

If Little thinks that his spat with Hunt has thrust the NHS into the public eye, then Saturday’s march will hopefully have given our health service more much-needed publicity. And with up to 100,000 people prepared to hit the streets of London in the cold February drizzle, the Health Secretary may not be sleeping so easy at luxury spas for much longer.