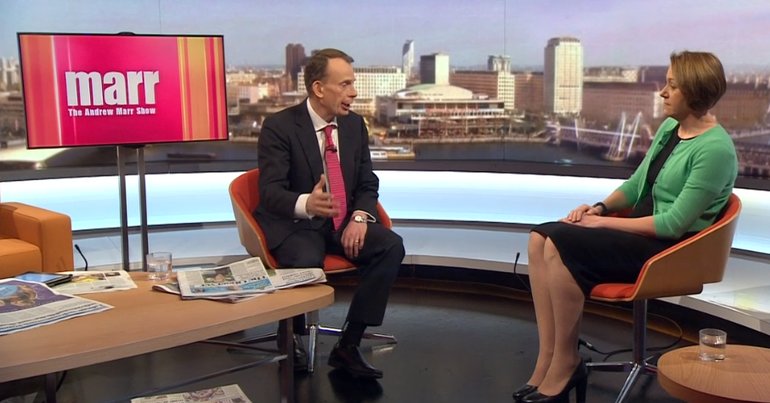 The editor of BBC political programme The Andrew Marr Show has told viewers that balance is not “desirable”. The comments came after the show aired an interview with a controversial guest but did not invite anyone to contest or balance her views.

Claire Kober was the Labour council leader in Haringey who recently resigned before an investigation into her competence. At the heart of the issue was local life in Haringey. Kober was about to take the majority of Haringey’s public assets and pop them in a private fund worth £2bn. The council would manage the so-called Haringey Development Vehicle (HDV) alongside multinational property developer Lendlease.

What does that mean? As Aditya Chakrabortty explains in The Guardian:

Understandably, locals felt strongly that Labour should protect rather than imperil public assets and services. So they used every tool of their democracy to stop the plans.

Some might call that democracy in action. But not the conservative or (large sections of) the liberal press. Kober has been given prominence across the mainstream media, along with her claims that it was all a sexist witch hunt by the far left; a purge of the Blairites, instigated by Momentum.

Now, instead of talking about the dangers of the HDV and privatisation, the press is back in its comfort zone – demonising left-wing politics.

The Daily Mail wrote in outrage about this alleged sexism on the part of Momentum. This from a paper which routinely publishes breathless articles about teen actresses being ‘totally unrecognisable’ (almost legally shaggable) along with the standard sexualised images. And of course, The New Statesman gave Kober a column to rewrite history too. Never mind that women in the local community felt so passionately about the issue that they spoke out:

“Women of Haringey respond to Council Leader’s decision to stand down..
‘Ms Kober, vocal opposition to an unpopular policy which is being implemented in a paternalistic way without proper consultation is not bullying or sexism, it is democracy” https://t.co/Vo04HwdJmU

For the local community and people with an eye on the facts of the case, this is annoying. But it’s not surprising from partisan outlets.

The BBC, however, has a duty to impartiality and balance.

But on Sunday 4 February, the BBC invited Kober onto the Marr Show, unchallenged. There was no representative from the Labour Party, Momentum, Haringey Council, or the local community to counter her arguments.

Why don’t the BBC just give Kober her own channel? https://t.co/RTL0HoJM47

The day Andrew Marr interviews a few victims of socially-cleansed council housing policy is the day I get my tiny violin out for Kober. Check iPlayer: never once covered until the people had their say (against Haringey Labour)

And when a viewer asked the show’s editor Rob Burley to explain the decision, they received a bizarre response. 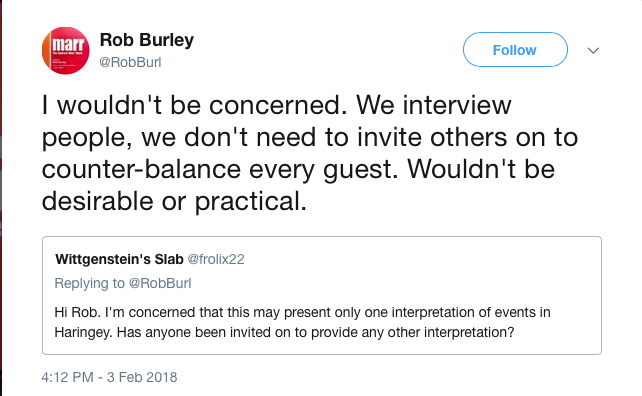 Rob Burley clearly missed a staff memo, because this matter was argued and settled last August. BBC Radio 4 carried an interview with former Conservative chancellor and renowned climate change sceptic Nigel Lawson. The hosts permitted Lawson, unchallenged, to make false claims to support his position that climate change doesn’t exist. After public complaint, the BBC apologised, and admitted it had breached its “guidelines on accuracy and impartiality”.

Just months later, a senior editor has not only committed the same error, but doesn’t seem to care. Because when other viewers challenged Burley’s stance, he gave similarly flippant responses.

Not really, it's called a TV format

This does not show a commitment to balanced news reporting. And that’s simply not good enough.

– You can send your complaint to the BBC here.