Dear white people, we need to have a chat about these women's suffrage celebrations [EDITORIAL] - Canary 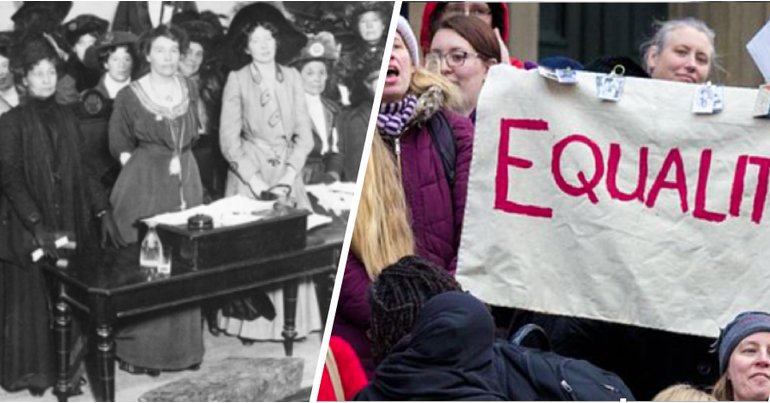 100 years ago today, British women won the right to vote. Except they didn’t. At least, not women of my colour or class. And today of all days, it’s important that we recognise this; and that we use that failure to bind us in the commitment never to make the same mistake again.

Some women are more equal than others

The 1918 Representation of the People Act extended the vote to white, land-owning women (or women with landowning husbands) over the age of 30. It wasn’t until 10 years later that all women were given the vote, and on the same terms as men.

There are a couple of ways to react to this news. For some, it’s an uncomfortable and inconvenient stain on a day of celebration. They ask for unity in the women’s equality movement, and say that bringing up these inequalities just sows division. In reality, that’s just people with privilege asking those without it to quit reminding them. It’s selfish. But worse, it’s wasteful. Nothing is ruined by acknowledging the reality of privilege. If we have the generosity of spirit just to sit with the brutal truth, we could help transform the next 100 years.

New Zealand led the way in female suffrage, granting all women the vote in 1893. But for white, middle-class suffragists in the UK, the fact that Maori women could vote and they could not was offensive for all the wrong reasons. As historian and author Jad Adams told The Telegraph:

I certainly know that British women were angry because Maori women had the vote and they didn’t. Prominent suffragists, [who preferred more peaceful protests] like leader Millicent Garrett Fawcett thought it was appalling that white women with a certain station in society didn’t have the vote in the home of the empire but in one of the colonies they did.

I mean, just try and name me one black, British suffragette. Not easy is it? Well, there are no widely celebrated black faces of the UK suffragette or suffragist movements. Because we weren’t welcome. The movement was not about us. It was about middle-class white women. And while Indian women fared a little better, the name Sophia Duleep Singh still means nothing to most.

And things were even worse in the US, where the women’s suffrage movement fully embraced white supremacy in pursuit of its own goals. Celebrated US suffragist Carrie Chapman Catt once said:

White supremacy will be strengthened, not weakened, by women’s suffrage.

And her sister-in-struggle Rebecca Ann Latimer Felton, the first (white) woman to serve in the US Senate, said:

I do not want to see a negro man walk to the polls and vote on who should handle my tax money, while I myself cannot vote at all.

Uncomfortable, right? Well, it should be. But we can use that discomfort to bind us together, in a commitment to do better.

The present and the future

The only way we can create a better present and future is by reconciling fully with our past. Not just the past of 100 years ago, but the last year and the last week and today. Everyone who has found themselves wishing (aloud or internally) that non-white women would just shut up and embrace this celebration can stop now. They can choose to be different right now. Because there are many more struggles we need to face together. We need each other. And we should never again ask those less privileged than ourselves to get to the back of the queue for the sake of expediting our own advances. Never again. That goes for those on the left who call for feminists and anti-racism campaigners to give them a pass in the name of a unified class struggle. It goes for the white liberals who say “I sympathise with your case, but…” whenever under-privileged groups fight for their rights. And it goes for those on the right, who see the loss of their own privilege as equal to someone else being denied basic human rights. All these behaviours are choices, and we can make better ones. It all starts with a little honesty, and a little understanding.