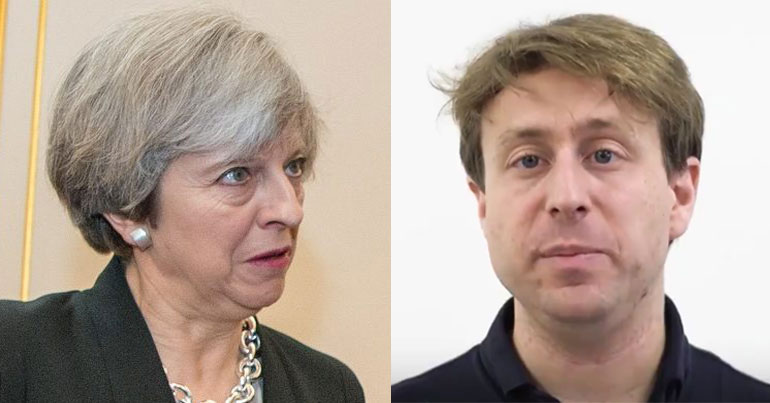 Theresa May has used the 100th anniversary of some (not all) women winning the vote to announce her plan to crack down on political criticism. But a leading human rights barrister has exposed how her proposal is not just “chilling” – it’s also very flawed.

On 6 February, May gave a speech celebrating the centenary of the 1918 suffrage act. Responding to the rise in abuse against election candidates, particularly women, she said:

We will take action to make our electoral process more robust and offer greater protections for people taking part in elections. While intimidation is already a crime, we will consult on making it an offence in law to intimidate candidates.

Enter Adam Wagner, a human rights barrister with the reputable Doughty Street Chambers. He posted a Twitter thread looking at the proposal. He began gently, with a bit of background:

1/ So I had a look into Theresa May's coming announcement that she will "consider a new offence to protect politicians and their families". For those who have been worrying that we don't need any new offences which potentially penalise political speech; well, wait for this…

3/ The recommendation is to create a new offence "in electoral law" of intimidating parliamentary candidates. Sounds sensible, right? But wait! What would it mean for political speech? And is a new criminal offence even needed? pic.twitter.com/p9htvAueGj

Then he ripped the proposal apart…

‘The police don’t want it’

May’s proposal is based on a recommendation from the Committee on Standards in Public Life. But that same committee included comments from the police in its final report [pdf, p60]. And as it turns out, the police don’t think much of the plan to create a new offence. They don’t think it’s needed:

4/ I'm afraid I have bad news for fans of this new offence. First of all, the committee that recommended it asked the police if they needed any new offences. It turns out that the police were very clear *they don't*. Here are a couple of very clear quotes from the report itself pic.twitter.com/i8dJ0CtdzY

And Wagner explained why:

5/ If that wasn't clear enough, here is the huge 'suite' of offences which are available to the police to manage harassment/violent threats etc against politicians whether on social media or not. Pretty comprehensive – that's why the police don't want a new offence. pic.twitter.com/jhmwoWQK33

Despite this, the committee recommended creating a new offence:

6/ So why, you might ask, is the Committee recommending (and the Prime Minister taking up the idea of) a new offence? Well, this is where it gets murky. Here's the bit where they move from nobody asking for a new offence and recommending one. Try and follow this one, logic fans! pic.twitter.com/4anVt8FTWJ

But it argued [pdf, p61] that “no behaviour which is currently legal should be made illegal” under the new offence.

You read that right. The proposed new offence won’t cover any behaviours that aren’t already illegal. As Wagner puts it, this is “nonsense on stilts”:

8/ I am calling this one. It's nonsense on stilts. It is clearly a case of "something must be done" and this is "something" so it must be done. It's irresponsible as even the police aren't calling for it but it will no doubt have a chilling effect on free speech around elections

So creating a new offence wouldn’t do much to ensure abusive people are prosecuted. But it would, Wagner argued, likely have a “chilling effect on free speech around elections”:

9/ Remember free speech? How do you fancy police and CPS deciding – during elections! – what constitutes this extremely vague definition of intimidation 👇🏼. The police should be kept far away from having to make these kind of calls. This is a bad idea and should be binned /end pic.twitter.com/EjW4NI3RbW

As David Allen Green, law and policy commentator at The Financial Times, summed up:

…for which there is no or inadequate legal aid for defendants…

…and for which the probation and prison services are in meltdown.

Theresa May is right about one thing. Britain needs more women in public life. 100 years after suffrage was extended to some women, fewer than one third of all MPs are female. In the Conservative Party, the figure is around one in five. And no woman in public life – no person anywhere – should have to put up with death threats, rape threats or harassment.

But cast your mind back to the last election. Which woman received the most abuse? According to Amnesty International, it was Diane Abbott – who received almost half of all Twitter abuse aimed at women MPs. Almost half.

And who vilified her? Well, as the Labour Party made clear at the time, it was Theresa May’s Conservative Party:

Such attacks on politicians, the consequent intimidating and abusive language and threats of violence towards them online, deter many people from entering politics… The Conservative Party has… promoted personal attacks as a core component of its national campaign.

There are so many ways Theresa May could have improved women’s access to and safety in public life. Amnesty International suggests several measures in its investigation into the abuse of women MPs. But May is pursuing a proposal that is at once pointless and dangerous.

This is not an attempt to end abuse or improve the lives of women. It’s politicking that aims to silence political criticism.