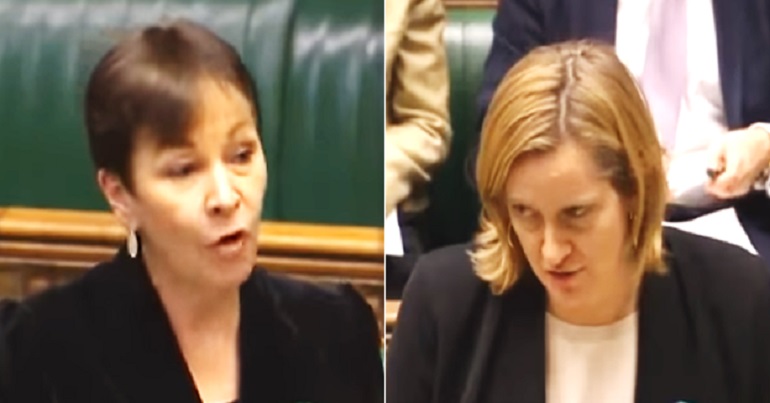 On Tuesday 6 January, Home Secretary Amber Rudd was no match for Caroline Lucas in parliament. And the Green MP for Brighton Pavilion’s short but telling point left Rudd in such a dilemma that she had to misrepresent the truth to rescue herself.

Parliament was debating the 100-year anniversary of the suffragettes giving some women the right to vote in elections. And Lucas used the opportunity to argue that the government should:

ensure that all votes count equally by introducing a fairer voting system.

She then asked Rudd:

would she agree with me that a fitting tribute to the suffragettes would be to replace our archaic and undemocratic electoral system with a system that ensures that every vote genuinely counts equally?

Oddly, Rudd didn’t agree. But in her response, she twisted the truth to fit her party’s own agenda:

So what is the voting system Lucas refers to? Why would it be fairer? And how was Rudd misrepresenting the truth?

Currently, the UK uses a First Past the Post (FPTP) voting system in general elections. But Lucas is calling for a change to Proportional Representation (PR). Campaign group Make Votes Matter argues that a PR system would be fairer, giving smaller parties the number of seats in parliament that match their share of the vote.

distorts the results of our elections and means that parliament does not reflect the way that people voted.

And the fact that the Conservatives only got 29.2% of the electorate to vote for them in 2017 adds weight to this argument:

And as the Electoral Reform Society tweeted after the 2015 general election:

As of 11am, here's how many votes on average it took to elect an MP:

PR is different. There are two options for use in Westminster, which the devolved assemblies and parliaments of the UK already use and which keep a constituency link: the Single Transferable Vote (STV) and the Additional Member System (also known as Mixed Member Proportionality):

People like Rudd who object to PR argue that the public already had a chance to change the voting system. Because the country had a referendum on the ‘Alternative Vote’ (AV) method in 2011, and overwhelmingly rejected it.

But AV is not PR. As Make Votes Matter notes:

The British people have never had a say on PR. The 2011 Alternative Vote (AV) Referendum was on a system which, by David Cameron’s own admission, is often less proportional than FPTP.

When just 29.2% of the public can give the Conservatives power, then clearly the system is flawed. But of course it’s unsurprising that people like Rudd want to keep the status quo. Because being undemocratically elected fits their agenda just nicely.