Theresa May just fired the starting pistol for the sale of our NHS to Trump [VIDEO, TWEETS] - The Canary 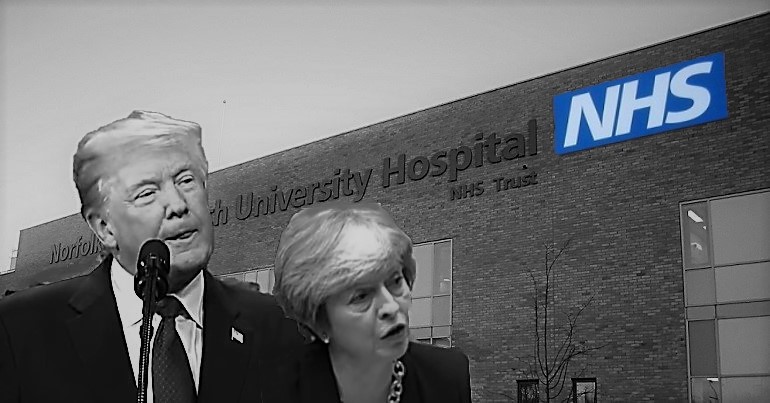 At Prime Minister’s Questions (PMQs) on Wednesday 7 February, Theresa May refused to answer a question over whether our NHS would be sold to the US. And in doing so, she led the politician asking the question to conclude that the “NHS is indeed for sale” under the Conservative government.

Can she give an absolute guarantee that, in those [trade] negotiations [with the US], the NHS will be excluded from their scope? And can she confirm that, in her conversations with President Trump, she’s made it absolutely clear to him that the NHS is not for sale?

And May was her usual self; non-committal and weaselly with her words:

Asked if PM would give an assurance that she’s told President Trump #NHS business not for sale in any trade deal with the US. All she has to say is that @GOVUK wants to increase trade with US. Can only infer that NHS is indeed for sale under @Conservatives. #PMQs.

And he was not the only one who smelt a US dollar-shaped rat in the PM’s answer:

Theresa May is given the opportunity at #PMQs to guarantee the NHS won't be used as a bargaining chip in trade talks with the United States, and ducks the question. Hard Brexit is a direct threat to the NHS.

There have been concerns for several years that NHS services might be sold off to US corporations. Previously, there was the Transatlantic Trade and Investment Partnership (TTIP), a proposed deal between the EU member states and the US. But although this is now off the table, for Great Britain and Northern Ireland at least the spectre of a post-Brexit UK-US trade deal still looms over our health service.

Meetings between UK and US representatives have been ongoing, reportedly in secret. And on 25 January, US Treasury Secretary Steven Mnuchin told BBC News:

Previously, May has flip-flopped over the NHS. During PMQs on 1 February 2017, she told Jeremy Corbyn and the rest of the House of Commons that:

The NHS is not for sale and it never will be.

But then, in April 2017, she would only commit to “an NHS that is free at the point of use” in terms of any trade deal.

Our NHS: under threat?

So which is it? Medical professionals are concerned. Dr Lauren Gavaghan, a Consultant Psychiatrist and campaigner in the NHS, told The Canary:

Theresa May once again refusing to answer a straight question on whether the NHS would be excluded from US-UK trade deals is deeply concerning.

As more & more of the NHS gets outsourced to private companies, and the NHS is re-structured by Jeremy Hunt into ‘ACOs‘ [Accountable Care Organisations] – following an American model – the concern is who will ultimately have control; it could potentially be private companies from the US.

But with public feeling running high about our struggling health service, any move towards further privatisation of the NHS could be politically dangerous for the Prime Minister. Is selling it off to Donald Trump and the US a gamble May is willing to take?