Dear Jeremy Hunt, 'we literally hate you', love from the NHS - Canary 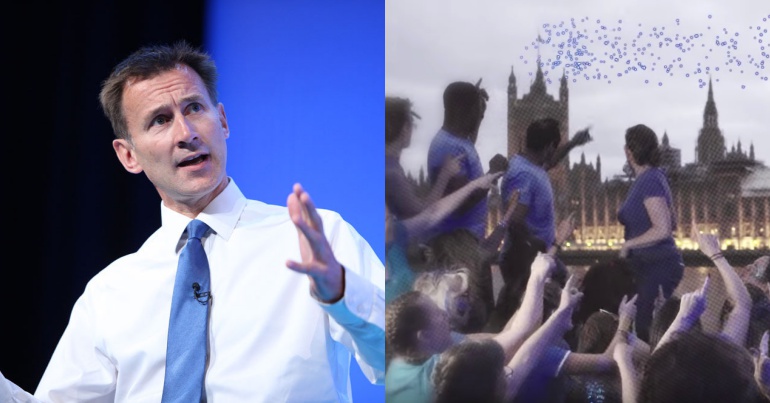 And as Hunt left the NHS, doctors, nurses and patients took to social media to tell him exactly what they thought.

Dr Mat Hoskins responded to Hunt’s resignation tweet, and in just four words, he summed up what thousands of NHS workers feel:

We literally hate you.

We literally hate you.

There was widespread agreement with Hoskins’ analysis:

That’s exactly how I felt as a teacher when Gove went. He did the same, dismantled education to privatise it, left us in a right mess. As a cancer patient, I hate Hunt equally. I rejoice for you and the NHS.

Hoskins was not alone, because ‘tributes’ to the former health secretary also poured in from NHS workers around the country. Nurses, doctors and health workers shared similar opinions about Hunt:

Have you ever worked in the health service John? I'm a nurse, i have 20 years experience, I earn15% less in real terms than i did 8 years ago, ive seen the service decimated, my colleagues leave in droves, unable to support themselves despite working in horrendous conditions 1/2

👏👏👏as a health worker of 39 years I totally agree, Hunt has been the worst Health Minister

Another NHS consultant was highly critical of the ways Hunt has presided over NHS patient safety and called Hunt a “bully in chief”:

Maybe not the worst health secretary ever – there's Powell, Clarke and Lansley but still a sort of bully in chief. And also the author of so very, very, much avoidable harm.

2018 marks 70 years of the NHS. But this Tory government has overseen:

the smallest increase in spending for any political party’s period in office since the second world war… the ten years up to 2020/21 are likely to see the largest sustained fall in NHS spending… in any period since 1951.

And doctors shared their thoughts about Hunt’s role amid these cuts. Too many people have died and there are calls for him to give evidence in an upcoming inquiry:

As former health secretary, I do hope you’ll be available to give evidence when this inquiry into why more than *20,000* extra people died in England/Wales from start of 2018 to 20/4/18 gets started.

As The Canary has previously reported, the NHS is in crisis. In January 2017 – under Hunt’s watch – the Red Cross said it faced a “humanitarian crisis” and deployed help at hospitals. Hunt has also overseen and engineered the ongoing cuts in social care which have created even greater pressure on A&E departments.

You have been shit for the NHS and staff and your government's policies and funding cuts have led to 100 excess deaths EVERY DAY in England alone since 2015 making the Tories the 5th leading cause of death in England. Your replacement will be equally shit. You are a disgrace.

And then there’s Hunt’s role in the creeping privatisation of the NHS:

Delighted to see Jeremy Hunt out of Dept Health but let’s not delude ourselves he’s only a puppet whoever the tories put in will continue to underfund, privatise by stealth and decimate services and staff. The NHS will only be safe under a Labour government led by Jeremy Corbyn

Hunt’s replacement, Matt Hancock, isn’t much cause for celebration:

If you thought Matt Hancock couldn't be worse than Hunt as Health Sec he is funded by IEA who want to abolish and privatise the NHS! https://t.co/mqHzlnSW5U

Meanwhile though, despite brutal working conditions, most are still glad to see the back of Hunt:

Yes because maintaining patient safety is always much easier with vicious cuts to the service and stressed, overworked staff! Good riddance! I'll be dancing into work tomorrow to do THREE PEOPLES' JOBS because posts are not being backfilled in the NHS that you've helped dismantle pic.twitter.com/G5jxNVJx0m

However, some doctors don’t think the NHS crisis will end with Hunt’s departure. Because the real issue is this government:

I matters not a jot that Hunt leaves Health after years of pay cuts for nurses, closures of services, privatisation of contracts, patients dying in corridors, GP surgeries closing and a workforce in crisis – the same policies will continue with a different face in Richmond House https://t.co/eHxKW3shsb

I'm as critical as anyone of Jeremy Hunt's record-breaking failures as health secretary, but he's just a hubristic human shield. Focus on the corporate capture of the NHS as a profit-making industry. We need a government who will restore & protect the NHS as a public service

Most people working in the NHS know that Hunt drove it further into the ground. As the odds fall on the prospect of another general election, healthcare workers around the country are watching and waiting: because a change of government is desperately needed. But at least they also got to tell Hunt: “we literally hate you”. And it’s a sentiment that’s impossible to disagree with.