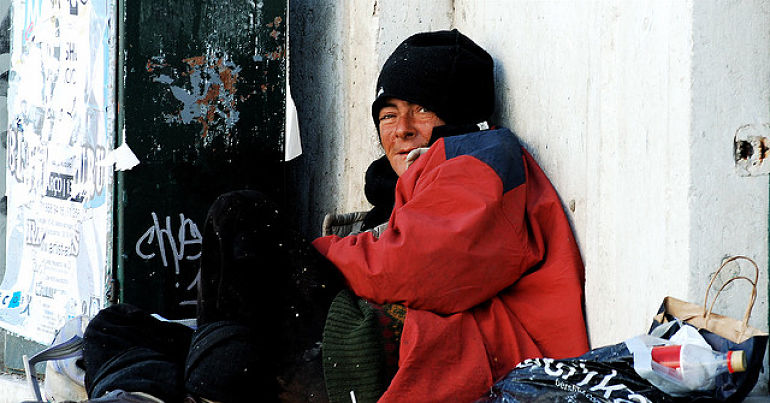 A heartbreaking Twitter thread encapsulates the sheer brutality of austerity Britain under the Conservative government.

James Gleave, a transport adviser from Bedfordshire, was waiting for a train home on 9 July when he saw something worrying:

I was waiting for a connecting train at Bletchley station. When i noticed a small, old lady with bags, visibly shaking and nervous on the platform.

He approached the woman and asked if she was alright. In a 45-minute conversation, she told Gleave her story:

Spouse abuse, and her family siding with said spouse seemed to be at the heart of it all. Beatings, rape, the whole works. After several years, she has had enough, and ran out with the change in her bag and clothes on her back. That was two weeks ago.

And she related how she’d tried to look for help:

In that time, she had been to the Council and Job Centre for help for housing and benefits. The former, despite her being vulnerable, could do nothing. The latter would take 6 weeks for her to get her benefits to which she is entitled, so long as she has an address.

But her situation was only worsening:

You can see how well that will turn out. She had been sleeping rough, which had aggravated her arthritis. Not serious enough for A+E, she couldn’t get a doctors appointment by just turning up, and she can’t get a free prescription for the pain. Spending any money on food and meds

Who can you call?

Gleave desperately tried to find the woman some support but was met with dead ends everywhere:

Local Council: Nothing. Not even emergency accommodation.
Local Voluntary Groups: All full, with no beds for the night. In Milton Keynes FFS!
Local Shelters: The same.
Citizens Advice: Not open until Wednesday.
Doctors: No appointments until Thursday (!!!!)

Eventually, a local vicar agreed to take the woman in for the night:

After escorting the woman to the vicar’s home, Gleave reflected on what her experience says about modern Britain:

Our support networks are assumed to be as so: 1. Family. 2. Community. 3. The State. We are busy making it so hard to access 3 for those in need, who are in need because they don’t have 1 and 2. If you fall through, you are fucked.

This is a brutal but accurate assessment. Years of this government’s austerity have eroded the state to the point where the woman in question was offered no support when her family situation unravelled.

And statistics show that her case is not a one-off. Rough sleeping has increased 169% since 2010. Meanwhile, a study found that 80% of homeless people who died in London during 2017 had mental health issues. This should not come as a surprise, given that some people with serious mental health issues are having to wait two years to receive specialist NHS help due to cuts.

Moreover, charities have warned that cuts to refuge funding have put women’s lives at risk. And the government has stripped councils to the point that they’re so desperate to cut costs that they ignore those they are meant to help.

It should never have happened

Gleave was rightly showered with praise for his compassion:

Truly awesome what you did James, that lady will never forget your kindness. Let's hope she gets all the help and support she needs x

Thank you so much for sharing this. So many of us are really struggling with austerity, and you’ve just shone a little beacon of hope ✨

But he should never have had to help the woman in the first place. Britain has the sixth biggest economy in the world. So no one should be forced into the ignominy of sleeping on the streets, let alone someone who is elderly and has suffered horrendous abuse.

The UK was once famed for its welfare state. But austerity has eroded it like a waterfall gushing down a cliff face.

It’s every person for themselves now, with heartbreaking consequences.

– Support grassroots groups like Streets Kitchen, a food project for and by people affected by homelessness of all descriptions.

– Discuss Britain’s most pressing political issues with family members, colleagues and neighbours. And organise! Join (and participate in the activities of) a union, an activist group, and/or a progressive political party.