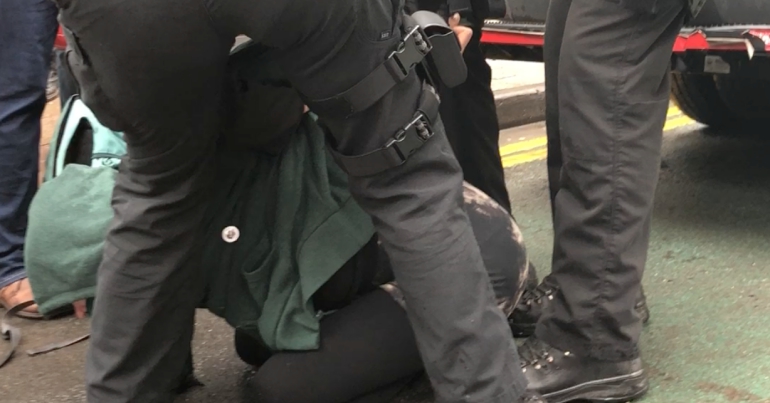 Three people arrested for protesting against an arms fair in Cardiff have been found not guilty. The trio were on trial for failing to leave private land after they stood outside one of the gates to the Defence Procurement Research Technology Exhibition (DPRTE). This action was taken to highlight the UK’s arms sales to Turkey.

The Permanent Peoples’ Tribunal (PPT) recently found Turkey guilty of war crimes and crimes against humanity due to its actions towards Kurdish people. Despite this, the UK has reportedly sold Turkey over $1bn worth of weapons since 2016.

In a press release seen by The Canary, one of the defendants – Imam Sis – explained why the protest was so important:

As a human being I have the right to protest murderers. When Turkey is killing my people using British supplied arms I will protest. The British government is complicit in the death of over 300 civilians including women and children who died during Turkey’s bombing of Kurds in Afrin. At the start of the Turkish invasion Boris Johnson openly gave official support to the Turkish regime

As The Canary previously reported, six people were arrested while friends of Anna Campbell, the UK anti-terror fighter killed in Afrin in northern Syria, chanted her name:

DPRTE is partnered by and features exhibitors from some of the UK’s most prolific arms producers. The Ministry of Defence (MoD) and companies that have been linked to arms sales to Turkey (such as BAE Systems and Rolls Royce) are all part of the event.

In May 2017, Theresa May and BAE Systems sealed a £100m contract to help Turkey develop fighter jets and improve trade relations. And Rolls Royce partnered with Turkish firm Kale in 2017 to build the engines for its fighter jets.

But that’s not all. Between July and September 2016, the UK sold Turkey £26m-worth of armoured plate, body armour and helmets; as well as £8.5m-worth of aircraft, helicopters and drones; and almost £4m-worth of licences for missiles, bombs and “counter-measures”.

The PPT found President Recep Tayyip Erdoğan and the Turkish state guilty of war crimes against the Kurdish people. The tribunal had heard evidence of atrocities committed by the state between 1 June 2015 and 31 December 2017, including:

But the case was thrown out after the prosecution was unable to prove they were protesting on private land. Three other people arrested at the arms fair accepted cautions.

Another of the defendants, Catherine Lambert, stated:

I’m pleased we’ve been acquitted, but this doesn’t change the fact that the UK government and companies like BAE, who exhibited at the arms fair, are complicit in war crimes in Afrin by selling weapons to Turkey. There is widespread evidence Turkey employ former ISIS and al-Qaeda fighters for the invasion and occupation of Afrin, and there are regular reports in Kurdish media of torture, kidnapping, rape, and the enslavement of women and girls, in occupied Afrin.

The third defendant told The Canary:

It’s great that we no longer have to be concerned about this prosecution. However, we still have to contend with the much larger fight against the arms industry, and the devastating effect of British-made weapons in places such as Yemen.

Kurdish politician Hişyar Özsoy previously told The Canary that the Kurdish people can feel “suffocated” and “isolated”. Hopefully, these type of actions in Britain will let Kurdish people know they are not alone, and that British citizens are prepared to stand their ground and not tolerate UK arms sales to Turkey.

– Write to Theresa May and your MP. Ask them to urge Turkey to resume peace talks with its opponents, and to release all political prisoners. Until that happens, ask them to cancel and stop approving arms sales to Turkey; and support Campaign Against Arms Trade to help make that happen.

– Read more Canary articles on Turkey, Syria, and Rojava/the Democratic Federation of Northern Syria (DFNS). And see more international reporting from us at The Canary Global.