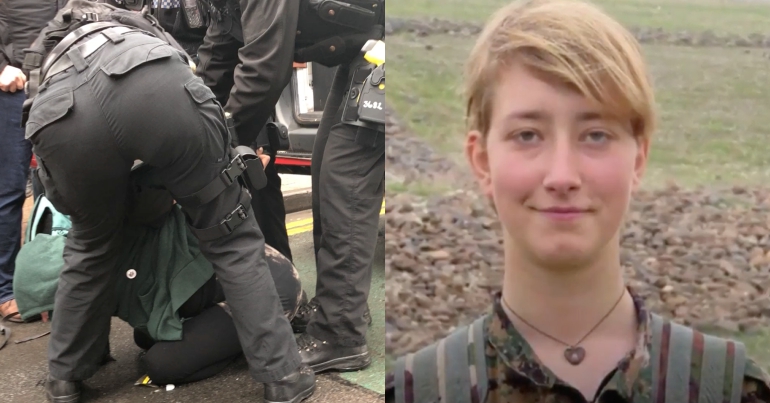 Six people were arrested outside an arms fair in Cardiff on 27 March. Friends of Anna Campbell, the UK woman recently killed in Afrin, chanted her name outside the Defence Procurement Research Technology Exhibition (DPRTE) as the arrests were made.

As police moved in, people shouted:

Anna is with us! We fight on!

Around 100 protesters greeted delegates who were forced to queue up to chants of “blood on your hands”. One woman explained to them why people were protesting and asked them to comment:

Anna was a brave and committed activist. She travelled to Syria to join the YPJ, an all-female Kurdish-led force in northern Syria (aka Rojava), in May 2017. She was reportedly killed in a Turkish airstrike in Afrin on 15 March. Following the news of her death, tributes poured in from the groups she was involved in, including hunt saboteurs and the Empty Cages prison abolition collective.

A person who met Anna in Rojava wrote:

She spoke of her belief in the revolution and her desire to live up to the strength of the women of Rojava. I didn’t doubt it, she seemed destined for great things, a true revolutionary.

It was with great sadness that I learned of her death this morning. She was a feminist, a fighter and a brave comrade.

DPRTE is partnered by, and features exhibitors from, some of the UK’s most prolific arms producers. The Ministry of Defence (MoD) and companies that have been linked to arms sales to Turkey (such as BAE Systems and Rolls Royce) are all part of the event.

In May 2017, Theresa May and BAE Systems sealed a £100m contract to help Turkey develop fighter jets and improve trade relations. And Rolls Royce partnered with Turkish firm Kale in 2017 to build the engines for its fighter jets.

But that’s not all. Between July and September 2016, the UK sold Turkey £26m-worth of armoured plate, body armour and helmets; as well as £8.5m-worth of aircraft, helicopters and drones; and almost £4m-worth of licences for missiles, bombs and “counter-measures”.

Following a two-month campaign, Turkey’s President Recep Tayyip Erdoğan claimed victory in Afrin city on 18 March. Although exact numbers are hard to prove, over a thousand people have died, including civilians. Some sources place civilian deaths at over 300. And according to the Syrian Observatory for Human Rights, 200,000 people have fled the region in recent days.

It was collective displacement. There was an endless line along the road.

Erdoğan insisted that he launched the attack to defeat the People’s Protection Units (YPG); the very people who the US and the UK have openly backed in the fight against Daesh (Isis/Isil), and who only months ago defeated Daesh in its Syrian capital of Raqqa. Yes, the people who put their lives on the line to liberate Syrian towns and villages from Daesh are now under attack from NATO‘s second-largest army.

Both US and Kurdish officials insisted at the start of the Turkish invasion that there was no evidence that the YPG had attacked Turkey. The BBC, meanwhile, has exposed the manipulation behind Turkey’s claims.

Afrin was actually one of the calmest areas in Syria until Turkey decided to increase its attacks, hosting tens of thousands of refugees with little international support.

Anna’s friends are showing her death will be remembered and her memory and struggle celebrated. All of us can and should join in. Let’s fight on together to defend Afrin and stop the arms trade.

– Write to Theresa May and your MP. Ask them to urge Turkey to stop its war on Afrin, to resume peace talks with its internal opponents, and to release all political prisoners. Until that happens, ask them to cancel and stop approving arms sales to Turkey.

Featured image via author and screengrab